Nick Foles responds to Jaguars benching him for Gardner Minshew 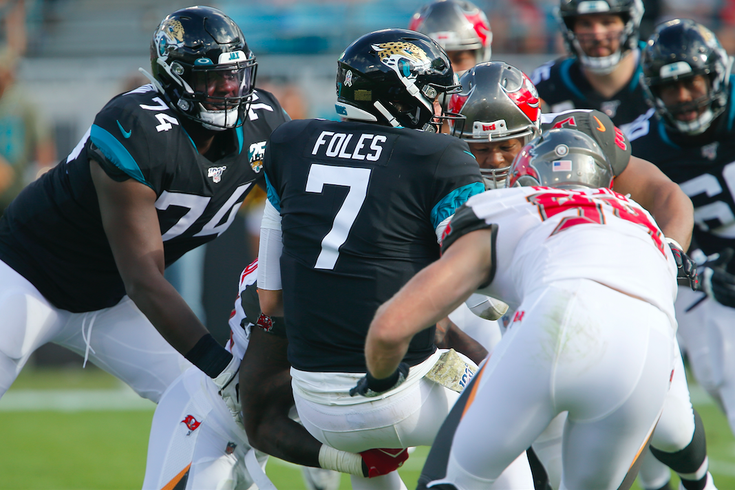 Jacksonville Jaguars quarterback Nick Foles was benched against the Tampa Bay Buccaneers, marking a dramatic turnaround since he was named the MVP of Super Bowl LII with the Philadelphia Eagles.

Jaguars quarterback Nick Foles got benched during Sunday's home loss against the Tampa Bay Buccaneers. Foles fumbled twice, including once for a touchdown, and has generally played poorly since returning from a broken clavicle a few weeks ago. He signed a 4-year, $88 million deal this offseason, including $50.1 million in guarantees. The Jags are winless in the games he's started.

Fans in Jacksonville let Foles hear it from the stands on Sunday — specifically, that they wanted rookie quarterback Gardner Minshew to take over for him.

Foles was asked after Sunday's 28-11 loss how it felt to be pulled from the game. Via ESPN:

"It's not easy," Foles said of the benching. "This is not an easy game. Tough situation, but I'm going to continue to put one foot in front of the other and keep moving. Like I said before, it's a trial, and the trials keep coming. Not easy, but I know where my heart is and where my faith is and what I'm going to lean on in this time like I always do in the good and the bad.

Head coach Doug Marrone said he had not discussed the benching with Foles or Minshew following the loss. He said he made the move "it was kind of dead" in the stadium.

"It's tough," Minshew said. "I've been in the same situation. I've been booed off the field at [East Carolina], and it's not a place anybody should have to be in. There's so much love in that room. We all support each other."

As difficult of a season as it has been for Eagles quarterback Carson Wentz, Foles has not fared any better since leaving Philadelphia.