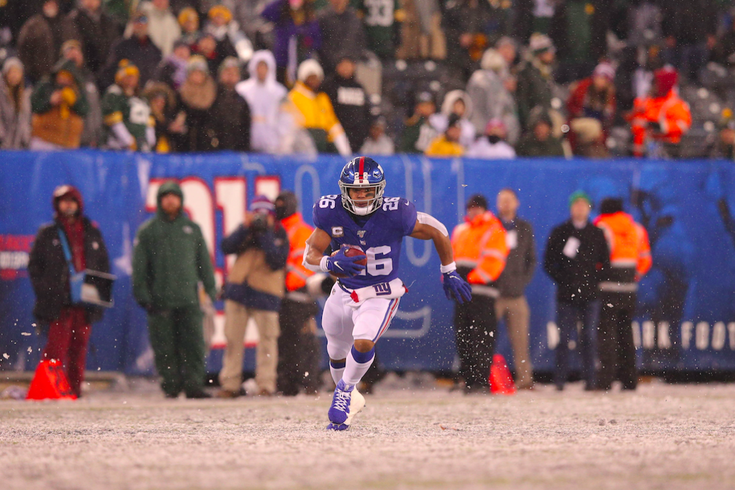 New York Giants running back Saquon Barkley grew up in Whitehall, Lehigh County, and attended Penn State University, but he says that hasn't stopped Eagles fans from giving his family a little grief when he comes to Philadelphia.

Against all odds, the 5-7 Philadelphia Eagles have a chance to gain a share of the NFC East lead with a win over the hapless New York Giants on "Monday Night Football" at Lincoln Financial Field.

With eight straight losses, the Giants will head down I-95 to the familiar hostile scene that quarterback Eli Manning associates with children giving him the middle finger.

Manning is expected to start Monday night in place of rookie Daniel Jones. He'll be handing the ball off to Saquon Barkely, who in just his second NFL season already has his own rowdy Eagles fan stories.

“You might see different types of hand gestures when you’re going to Philly,” Barkley said, according to the New York Post. “But that’s Philly.”

When the Eagles and Giants met in Philadelphia last year, Barkley said his father was grilled by Eagles fans at the Linc.

“I remember my dad went to the game last year, and my dad had to take a step back from himself and remember that he’s my father and we don’t want to be on the front cover of the paper in New York,” Barkley said.

The Penn State product recalled that "a fan might have said something different that (my dad) didn't really agree with," but he felt his father showed restraint in the situation.

We don't really know what was said or whether the ribbing was in the spirit of friendly competition. Eagles fans may have a different definition of "friendly" than most NFL fanbases.

Barkley was born in the Bronx but grew up in the Lehigh Valley before attending Penn State.

The Eagles and Giants enter Monday's game with an all-time record of 86-86-1 against each other. If the Eagles win, it will be the first time in their history they've had the all-time advantage over their rivals. They've been dominant against the Giants over the last decade.

Barkley, who has struggled with injuries in his second NFL season, ran for more than 100 yards and scored a touchdown in each of last season's divisional matchups against the Eagles.