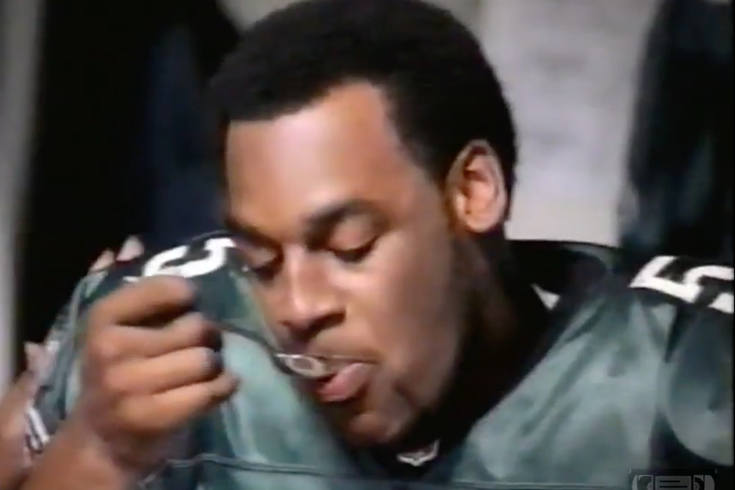 Former Eagles quarterback Donovan McNabb was, for a time, the face of Campbell's Soup's NFL campaign. McNabb said it probably cost his waistline a few pounds.

Former Eagles quarterback and current amateur NBA prognosticator Donovan McNabb spent Thursday afternoon answering questions from random sports fans on the internet, in an AMA (ask me anything) on the Bleacher Report app.

The results were basically what you'd expect: lots of questions about puking in Super Bowl XXXIX, and a combination of odd and commonplace answers from No. 5.

One of the best questions, by far, came from a Bleacher Report account with the username @Romo9, who asked McNabb about his time as a spokesperson for Campbell's Soup, a randomly long-standing tradition for NFL stars.

Here's how that interaction went:

@Romo9: "When you were recording your Campbell Chunky Soup commercials, did you ever sneak in a couple sips??"

McNabb: "Ooooh, I did. I had to eat a lot of that. I probably gained weight from having to eat so much of it. I grew up on Campbell's soup, so it was kind of one that I slid into and enjoyed it."

I'm not sure I can fully explain why I love this interaction, but I do. McNabb opening his answer with a satisfied "ooooh" probably helps. Imagining McNabb returning home after a busy day of eating soup, full and happy, feels like a perfect encapsulation of the former QB.

If you need to jog your memory, here's McNabb's inaugural 2001 Campbell's spot:

Quite a few players have starred in the Campbell's ads, which began with former Eagles great and then-Green Bay Packer Reggie White during the 1997 season. McNabb followed four years later, as the first Eagles player to appear in the ad campaign. He reprised his role as Soup Man for six straight years.

Someone might want to warn current Eagles tight end Zach Ertz about the possible side effects of becoming a Campbell's spokesperson:

Staying warm in style thanks to my @CampbellsChunky sleevie blanket w/ soup pocket 😂 Available for one more day, grab yours and send me a pic! #ChampionsOfChunky https://t.co/U1JKpZq31H pic.twitter.com/sJSe09xHB6

McNabb gave a few other interesting, actually-football-related answers during the AMA, like picking a Chiefs-Seahawks matchup in Super Bowl LIV, and saying the Eagles didn't put the ball in the hands of Zach Ertz and Jordan Howard enough earlier this season. But the soup was absolutely the highlight of the day.