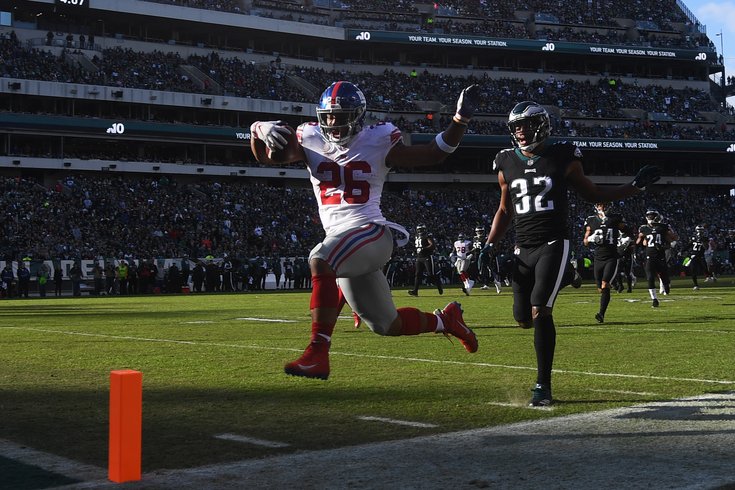 The Eagles cannot let Saquon Barkley go off on them like he did in 2018.

If the Philadelphia Eagles run the table the rest of the way (not at all likely), they will win the NFC East, and get a home playoff game. Some of you would rather they just lose as many remaining games as possible so that (a) they get a better draft pick, and (b) changes occur in the coaching staff. Some of you would prefer that they still try to keep winning the division.

Neither viewpoint is wrong, but for the latter, here are our five matchups to watch against the Giants.

In 2018, Barkley took home NFL Rookie of the Year honors after he finished with 2,028 total yards from scrimmage and 15 touchdowns. He gained 5.0 yards per carry, and caught 91 passes out of the backfield. He was pretty much the only reason Giants fans had to watch their games.

Barkley's follow-up season has not gone well. He suffered an ankle injury Week 3 against the Buccaneers, and it was expected that he would miss a substantial amount of time, but he (perhaps foolishly?) only missed three games. Upon his return, he has not been the same player that he was in 2018.

And his receiving numbers:

Still, you can bet that Barkley will be the main focus of Jim Schwartz's game plan this week, especially considering Barkley made some incredible plays against the Birds last season.

Here's what he did Week 6, when he ran for 130 yards, and added an additional 99 through the air. The nine-yard run at the 0:30 mark and the run after catch at the 1:12 mark are examples of his ridiculous athleticism:

First and foremost, the Eagles cannot allow Barkley to go off against them like he did a year ago.

In case you hadn't noticed by now, it appears that Eli Manning is going to start on Monday in place of Jones, who has an ankle sprain.

Like a lot of young quarterbacks, Jones has gotten the ball out slowly this season. According the NFL's "Next Gen" stats, Jones gets the ball at an average rate of 2.88 seconds. Conversely, Manning has traditionally gotten the ball out quickly, particularly against the Eagles. In 2018, Manning got the ball out in 2.65 seconds, on average, and 2.5 seconds in 2017.

It's going to be difficult for Manning and the Giants' receivers to get back on the same page going from a quarterback who took his time in the pocket, to one who likes to get it out quickly, and relies on timing and precision.

A common theme this season has been that the Eagles have faced a lot of bad and/or injury-depleted offensive lines. The Giants are no different. They are particularly vulnerable on the edges, where 31-year old LT Nate Solder is clearly in decline, and 30-year old journeyman Mike Remmers is on his 7th team (8 if you include a second stint with the Vikings) in 8 years.

On the season, the Giants have given up 35 sacks, which is "only" the 12th-highest amount in the NFL, and 96 QB hits, the third-most in the NFL.

Yes, it could be more difficult for the Eagles to get home against Manning than it would have been against Jones, but the Eagles' defensive line still needs to create pressure to force the Giants to throw quickly.

4) The Giants' receivers vs. the Eagles' secondary

The Eagles' cornerbacks had a nice four-game run against the Bills, Bears, Patriots, and Seahawks, in which they had Philadelphia believing that they might actually be... good? And then Miami happened.

Ronald Darby and Jalen Mills will look to bounce back against what actually isn't a terrible group of Giants receivers. They've been banged up and/or suspended at various times this season, but the ball gets spread around, and the receivers have made plays for their quarterback. A look at their individual numbers:

Tate and Shepard entered the season as the Giants' top two receivers, but Slayton, a rookie, has also emerged as a down-the-field playmaker. When the Eagles have struggled this season against the pass, it has been on the long ball. Slayton ran a 4.39 at the 2019 NFL Combine, to go along with other impressive athletic measurables:

A look at some of the plays he has made this season:

What is that music?

Anyway, with added resources likely to go toward slowing down Barkley, the Eagles' corners could be asked once again to shut down opposing receivers without a lot of help. The Eagles cannot give up the big play on Monday night, and must beware the double move.

As we pointed out last week, if the Eagles couldn't get their passing attack going against the Dolphins' atrocious pass defense, then they couldn't pass on anyone. As it turned out, they were able to get their passing offense going in Miami, though obviously, the Eagles' defense provided a major letdown.

The Giants' pass defense isn't much better. Here's what they have done this season against the pass:

The biggest culprit in the Giants' secondary has been rookie first-round pick Deandre Baker, who has gotten lit up like a Christmas tree all season long. Expect the Eagles to attack Baker, as opposing offenses have all year.

Additionally, the Eagles have had success attacking LB Alec Ogletree in the passing game, and Zach Ertz, who has a four-game TD streak against the Giants, will be looking to put a nightmarish game in Miami behind him.