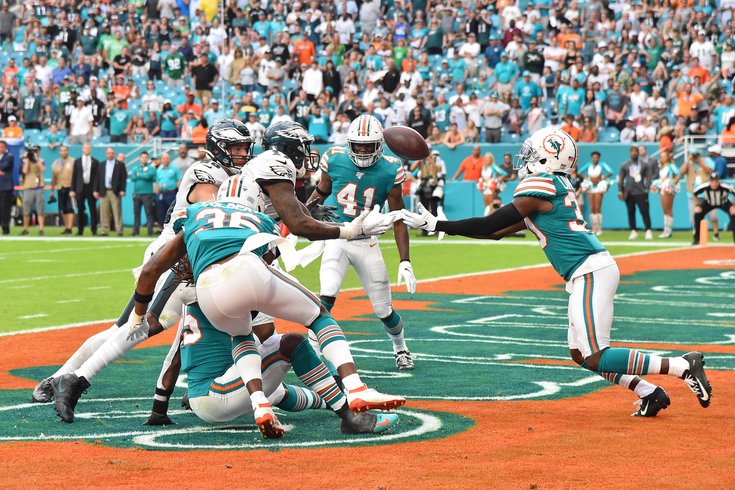 It would not have been justice if Alshon Jeffery caught this Hail Mary attempt.

Here's where people around the country have the Birds ranked after the 13th week of the 2019 regular season:

There are plenty of issues to point to with the 5-7 Eagles, but the inconsistency on offense and in the passing game, in particular -- which Groh is partially responsible for -- have stymied this team's chances. If the Eagles don't turn things around, there's a real chance that changes are made to the staff.

#JimmySays: WR coach Carson Walch is a goner, and Groh probably will be as well. Should the Eagles somehow pull it together down the stretch and the offense begins to look improved, the organization cannot be fooled into sticking with a staff that is helping produce underachieving results dating back to 2018.

An unthinkable loss for the Eagles, who had a 28-14 lead over the 2-9 Dolphins but couldn't close out a win that would have moved them into a tie atop the NFC East. Despite a highly productive day from Carson Wentz and the struggling Eagles offense, a winnable game swung on a series of critical failures in the second half. Dropped passes, overthrown balls, penalties, bad sacks, missed field goals -- Philadelphia opened up a bag of ineptitude and dumped it all over the field in Miami. Doug Pederson said on Monday that his team "self-destructed" while labeling the Eagles a "long shot" to make the playoffs. That's not quite accurate: Philly remains just one game behind Dallas in a weak NFC East, but this is a hard team to believe in. Fix one problem, and another one pops up. It's a losing game of whack-a-mole.

#JimmySays: It is kind of interesting that Pederson called the playoffs a "long shot," given that the the Eagles still "control their destiny." You'll hear negativity like that from fans and media, giving their opinions that the team isn't good enough to win the games, but it is not something you really ever hear from the coach of a team that is only a game back with four games to play, especially one as positive as Pederson. Does he simply not know that he's only a game out?

There won’t be many losses this season worse than the Eagles falling at Miami. Philly was up 10-0 before anyone even settled in, and still blew it. Technically the Eagles could still win the NFC East if they beat the Cowboys at home in Week 16, but they can’t be trusted to beat anyone the rest of this season.

#JimmySays: The Eagles are somehow favored by 8.5 against the Giants this week.

How do they lose to the Dolphins? The defense regressed in a big way against Miami. They need to pick it up heading down the stretch on that side of the ball.

#JimmySays: The Eagles were 17th in CBS' power rankings last week, and moved up a spot after losing to the least talented team in the NFL.

If Carson Wentz merely had Aaron Rodgers' ability to complete Hail Marys, this team would be on its way to the NFC East title. Alas ...

#JimmySays: Huh? I'm guessing whoever wrote this saw little more than the Eagles' final Hail Mary on the Red Zone channel, and that's what he remembered about the Eagles from this weekend, and then put zero thought into providing any salient analysis or finding some kind of interesting nugget.

What was that? The Eagles finally found their offensive groove with Carson Wentz in a favorable matchup, and then their defense completely let them down against the Dolphins. Doug Pederson was outcoached, and what was a so-called easy win turned into a costly missed opportunity.

#JimmySays: If the offense looked good and the defense looked bad, then wouldn't Jim Schwartz have been the one who was out-coached? That said, I do agree Doug did not have his best day, as the offense should have been even better against a completely decimated Dolphins D.

The loss to the Dolphins simply was inexcusable for a team in position to tie for the division lead. It underscores that the Eagles simply are not a very good team. They still could end up winning the dreadful NFC East. They’ll be at home for the Dec. 22 meeting with the Cowboys that could be for the division crown. But winning this division looks like less of an accomplishment all the time.

#JimmySays: The NFC East is a 10-26 against teams outside of the division.