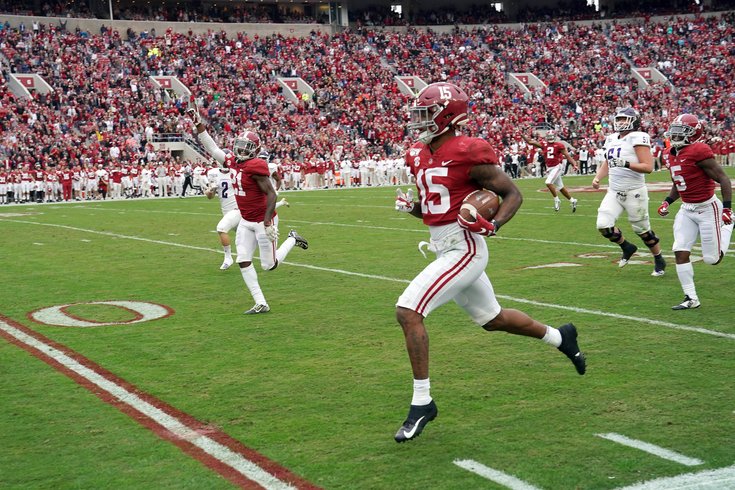 As long as you're taking in some college football bowl action this New Years Day, here are some players who could make sense for the Philadelphia Eagles in the 2020 NFL Draft.

McKinney is a versatile playmaker who is drawing comparisons to another former Bama DB in Minkah Fitzpatrick. McKinney was only a starter for two years at Bama, and he put up impressive numbers in a defense where there sometimes aren't enough big plays to go around:

We're profiling McKinney because he'd be a good fit in the Eagles' defense (or any defense, really), but I would say the odds are low that he lands in Philly, as I can't imagine that they'll take a safety in the first round, and he won't be there in Round 2. I do think he'd make sense for Dallas, so you may as well just know about him now.

Lemieux a four-year starting left guard at Oregon, so if you're the Eagles, you'd only be interested if you think Isaac Seumalo is your center of the future, and you think Lemieux can be your starter at LG, as you're not (in theory) getting a versatile lineman.

If you do think Lemieux can be that, he is a technically sound guard with some power and an ideal demeanor., but he's not going to block guys out in front of screen 20 yards down the field like Jason Kelce. Here's Lemieux against Auburn's talented front this season. There's definitely plenty to like:

Johnson was a 4-star prospect out of Glassboro High School in South Jersey who enrolled at Penn State, reshirted, and played at Happy Valley for three years before transferring to Oregon. He had some moments, like a walk-off TD reception against Iowa in 2017, but overall, his PSU career was a disappointment.

In his redshirt senior season at Oregon, Johnson hasn't made a huge impact, catching 25 passes for 401 yards and 4 TDs. So why profile him? Well, he's very big, and clearly skilled. A highlight reel from 2017:

Should Johnson go undrafted, perhaps Johnson would follow in the footsteps of former Glassboro High alum Corey Clement, by signing with the Eagles as an undrafted free agent?

Callaway is a speed receiver whose talents may have been wasted to some degree in Tennessee's offense. His production there wasn't great overall, but his yards per catch average should appeal to the Eagles, especially his 21.2 YPC in 2019.

While the numbers aren't where you'd like them to be, Callaway's talent is still pretty clear, as he made more than his share of spectacular plays:

The Eagles haven't had a threat at punt returner since "Chip Kelly era Darren Sproles." I think Callaway makes sense late on Day 3, as an immediate special teams contributor, and developmental receiver.

Smith's fit with the Eagles is pretty straightforward. He is a brick wall offensive lineman with left tackle and left guard experience who anchors against power, and moves the line of scrimmage in the run game (though there are concerns about his aggressiveness). In the NFL, he'll very likely play guard.

The hard part with Smith is determining how healthy he is, as he has had recurring issues with blood clots in his lungs.

MORE: A chronological look at the journey of the Eagles' 'practice squad guys' to the active roster | Looks like the Eagles' three NFC East rivals will all have new head coaches in 2020