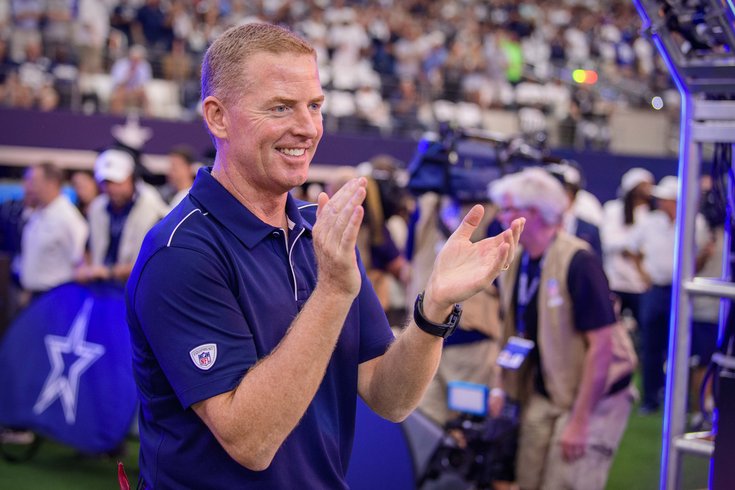 Doug Pederson is the last man standing. Jay Gruden was fired by Washington months ago, Pat Shurmur was fired by the Giants today, and the Cowboys are reportedly moving on from Jason Garrett.

And so, let's take a look at each of the Eagles' NFC East rivals, and what may be next for them.

In 152 regular season games, Garrett had a record of 85-67, plus a 2-3 record in the playoffs. His record looks fine in print, but wasn't good enough for a team that had a legitimate franchise quarterback in Tony Romo, as well as other big-time stars like DeMarcus Ware, Tyron Smith, Dez Bryant, etc.

Garrett's most appealing trait to the Cowboys, was that he was an agreeable puppet for the meddling owner, who means well, but ultimately hinders the success of the team as long as he stays extremely involved in the day-to-day operations, instead of people who are smarter and better suited for those responsibilities.

Garrett headed into the 2019 season as a lame duck coach, as in, one in the final year of his contract. Nothing short of a deep playoff run was going to save him. His termination was obvious after an extremely disappointing 8-8 season that left the Cowboys out of the playoffs.

A report emerged that the Cowboys are firing the entirety of coaching staff, in addition to Garrett. That doesn't pass the smell test, but we'll see.

What's next? Rumored coaching candidates are all over the map, so it's really not even worth sifting through the noise just yet.

Why did the Giants hire him in the first place? Because the Minnesota Vikings were halfway decent offensively for one season with a journeyman quarterback? Uh, ok. Apparently, one reasonably successful season made up for a track record that was less than awesome over Shurmur's career as a head coach and/or offensive coordinator.

Here were the offensive rankings of the teams Shurmur coached when he was either the HC or OC in his stops prior to landing the Giants job:

His average ranking in yards was 18.6. His average ranking in points was 18.3. In fairness, he didn't have a lot to work with talent-wise when he coached the Rams and Browns. On the other hand, he didn't really have much of a hand in Chip Kelly's offenses in Philly when they were racking up misleading, inflated offensive stats from 2013-2015. So maybe those two things even out.

But there was nobody better? That hire was obviously bad from Day 1, and Shurmur's failure was extremely predictable.

Somehow, Dave Gettleman will get to keep his job, despite being arguably being the most incompetent GM in the NFL. In other words, Gettleman will continue to destroy the team from within for at least one more year.

What's next? There's a lot of smoke around Baylor head coach Matt Rhule, who was an assistant OL coach for the Giants in 2012 for one year before becoming the head coach at Temple from 2013 to 2016.

Gruden was laughably made a scapegoat mid-way through the season, but he was hardly their problem. Washington's biggest issue, by far, was GM Bruce Allen, who was finally fired as GM, and more importantly, not reassigned to a another job with the team. He's gone, completely.

Allen was hired to be Washington's GM at the tail end of the 2009 season, and he has been the head personnel decision maker ever since, save for the short tenure of Scot McCloughan, who Allen helped oust after two seasons (2015-2016) with the team. In Allen's 10 full seasons with the team, Washington's record was 62-97-1. That would be a winning percentage of 0.391.

Beyond the bad record, Allen has a bad reputation among former colleagues, agents, and other personnel people around the league. He also didn't even know the name of his own starting quarterback.

While Washington's only real hope of becoming a legitimate Super Bowl contender is if Dan Snyder sells the team, the ousting of Allen certainly doesn't hurt.

What's next? Coaching searches often produce last minute changes of heart, but it looks like former Panthers HC Ron Rivera is at least the odds-on favorite there:

Former Panthers’ HC Ron Rivera is expected to be hired as the next head coach of the Washington Redskins barring any unforeseen developments, per sources.

In nine seasons in Carolina, Rivera had a 76-63-1 record, including a Super Bowl appearance in 2015. He would bring much-needed stability and competence to the position.