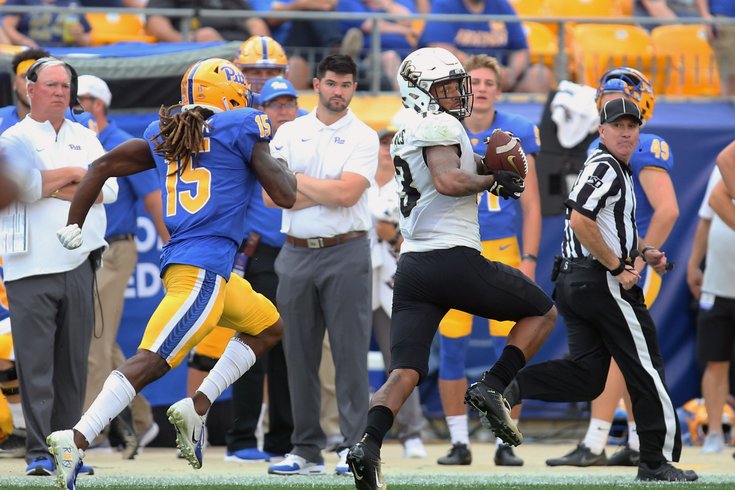 If you're checking out the Bad Boy Mowers Gasparilla Bowl, as I know you are, make sure you pay close attention to UCF WR Gabriel Davis.

As long as you're taking in some college football bowl action this Saturday, here are some players who could make sense for the Philadelphia Eagles in the 2020 NFL Draft.

Those ball skills have carried over to the D1 level, as he is second in the country with 8 INTs, to go along with 16 additional pass breakups.

A 6'1, Barcoo has good length, but he has a very slight frame. He is thought of as a willing tackler, but at 175 pounds, there will be concerns over whether his body can hold over of the course of a 16-game (and beyond) NFL season, much like Sidney Jones.

Gandy-Golden is third in the nation in receiving, with 74 catches for 1333 yards and 9 TDs. Like Omar Bayless, another small school wide receiver we profiled last week, Gandy-Golden is another bigger receiver with good hands who wins in contested catch situations, but does not have good speed.

Gandy-Golden isn't exactly a great fit for the Eagles' desperate need for more speed, but they seem to prioritize this type of player for some reason, so for the sake of being thorough...

Morgan fits the size profile the Eagles seem to prioritize, right or wrong (I think wrong, personally, but whatever). Still, he has a live arm, capable of making "all the throws" at the next level.

Here he is against UTSA this season. Again, note the arm strength:

Of course, the Eagles took a shot on Clayton Thorson in the fifth round a year ago, he stunk, and the team cut him. I believe they'll take another late-round flier on a quarterback again in 2020, and I believe that Morgan is a legitimate NFL prospect, unlike Thorson.

Davis-Gaither is a smaller, athletic linebacker with good coverage skills, who looks a little more like a big safety than a linebacker. In 2018, he had 7 pass breakups, which was eighth in the nation among non defensive backs. He had 6 pass breakups in 2019, and an INT, which shows some consistency in that area.

He reminds me a little of Kamu Grugier-Hill, in that he has the athleticism to contribute immediately as a core special teamer, but the Eagles would certainly want him to bulk up a bit before they use him in a prominent role in the regular defense.

I've held off profiling Davis until now, because he's a junior, and I wasn't sure if he would declare for the 2020 NFL Draft. Now that he has, let's dive right in.

Davis has good size, good deep speed, and he can win 50-50 balls, but there are concerns about his acceleration, agility, and his ability to stop and go. In that sense, he reminds me a little of the Seahawks' DK Metcalf, who the Eagles passed on in favor of J.J. Arcega-Whiteside in the 2019 NFL Draft. A look at Davis' highlights:

Davis has a good shot at being a Day 2 pick.