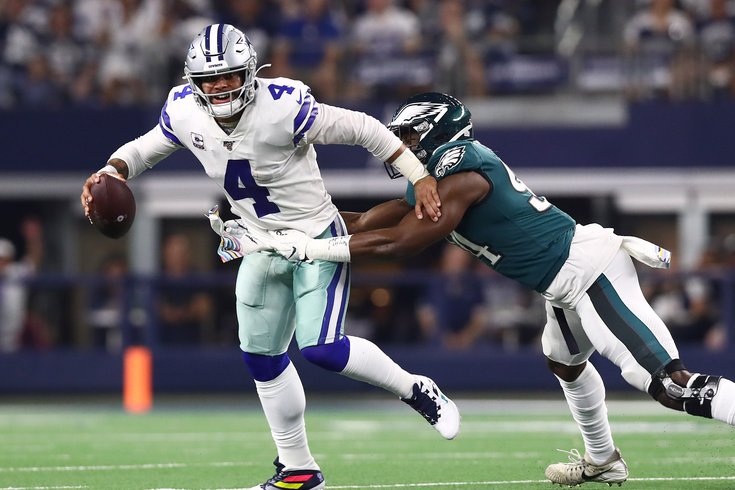 The Eagles and Cowboys currently play each other twice per season in the NFC East.

The NFL playoffs don't start for a few more weeks, but for the Philadelphia Eagles, they start on Sunday.

In fact, it's probably more accurate to say they started two weeks ago against the Giants, a game the Eagles won in overtime, and continued last week when the Birds knocked off Washington in the final seconds.

Now, Philly faces its toughest test of that recent stretch when it welcomes Dak Prescott, Ezekiel Elliot and the Cowboys into the Linc for what amounts to an NFC East Championship Game — if Dallas wins, the division is theirs, but if the Eagles win, and beat the Giants in Week 17, they will be heading to the playoffs to represent what has been by far the worst division in the NFL this year.

For the Eagles, this season has been one wild ride, with the team losing to the Lions and the Dolphins, who are a combined 6-21-1 this season, while beating the likes of Green Bay and Buffalo, who are a combined 21-7. Go figure. Unfortunately, when it comes to Sunday's matchup against the Cowboys, there's no telling which Dallas team will be taking the field at the Linc. Will it be the one who lost three straight on two separate occasions this season, or will it be the one that just blew the doors off the Rams in a crucial game for both teams on Sunday night? That's the real question here — which team will show up? — and, looking at these two squads, it's a question that needs to be asked of both.

By the end of the weekend, one way or the other, we will have an answer, and will (likely) know which team will be playing into January for the second straight year.

Let's take a look at how our writers see this big Week 16 matchup playing out...

This line was Cowboys (-2.5) before news emerged that Dak Prescott has an injured shoulder. I don't think anyone realistically believes that he won't play on Sunday, but maybe his shoulder injury will significantly hamper him from throwing the ball down the field.

I have tried to get there, in my head. To a place where I can honestly expect the Eagles to beat the Cowboys on Sunday. And I can’t.

Both have been wildly inconsistent. Both have been overwhelmingly disappointing. Both have shown glimpses of teams that are built to contend while both have inexplicably just sucked. But the injury situation just favors Dallas way, way too much.

Short of Dak Prescott’s shoulder giving out, I just don’t think the Eagles have enough on offense to put up enough points. No Alshon, no DJax, probably no Jordan Howard or Nelson Agholor or Lane Johnson. The unit is just too decimated, despite some very impressive play from Carson Wentz of late.

The defense will have its hands full with a plethora of healthy weapons for Big D, not the least of which are Ezekiel Elliott and Amari Cooper, each of whom have reputations for mauling Philadelphia.

The Birds’ recipe of long, slow, deliberate drives will need to be flawless in this one, and it won’t be.

The Eagles will be put out of their misery in this one and attention will turn to the 2020 NFL Draft.

It's really tough to pick the Eagles in this one, no matter how hard I try to talk myself into it. They just don't have enough to get this done, and that's not really their fault. Sure, it would be nice to see a fully healthy Eagles squad facing off against a fully healthy Cowboys squad for the right to make the playoffs, but that's just not going to be the matchup we're going to get. Instead of Carson Wentz lining up alongside DeSean Jackson, Alshon Jeffery and Jordan Howard, we're going to get Wentz, Zach Ertz, Miles Sanders and a bunch of nobodies. And on the other side, there's been some serious concerns about the health of Dak Prescott's right shoulder as he nurses an AC injury. Welcome to December in the NFL.

If Prescott's injury is bad enough to keep him out, or prevent him from throwing the ball more than a few yards down the field — sure, that seems like a stretch, but it's worth noting that the Cowboys quarterback hasn't thrown in practice all week — then I'd like to reserve the right to change my prediction. But right now it seems like Prescott is going to play, and, without knowing exactly how limiting this injury is, I just can't bring myself to pick against Dallas, especially after what they did the last time these two teams met.

Maybe that's just wishful thinking on my part, as I need a big game from Amari Cooper to help me beat Joe Santoliquito in the championship of the PhillyVoice fantasy football league, but the Prescott injury is the only thing preventing me from picking the Cowboys in an absolute landslide. The Eagles needed all 60 minutes to beat Washington, and needed even more than that to beat the Giants. No matter what Cowboys team shows up on Sunday, it's certainly going to be better than either of those two teams.

The Eagles had their chances this season and have ultimately proven unworthy of a trip to the playoffs. That will likely be the reality they're faced with when they wake up on Monday morning.

See, I never just did things just to do them. Come on, what am I gonna do? Just all of a sudden jump up and pick the Eagles for no reason other than that I refuse to pick the Cowboys? Come on. I got a little more sense than that.

... Yeah, I remember picking the Eagles because I refuse to pick the Cowboys.

NFL history has given us the Ice Bowl, the Fog Bowl, and the Freezer Bowl. Now, welcome to the Wretched Bowl, between two underachieving teams that will play for the right to be the most undeserving crew in the NFC playoffs. It doesn’t really matter who wins, since both teams are awful in comparison to the NFL's elite. Some in the city are going crazy over the Eagles’ two comeback wins over a pair of teams that combined have won six games. (Most that I know could care less, and kissed the 2019 Eagles goodbye a month ago. They couldn’t give their Eagles-Giants tickets away).

The Cowboys smashed the Rams last week, 44-21, and the last time I looked, the Rams won eight games—more than the Redskins and Giants combined. Carson Wentz is playing Shane Falco (he was a lefty with better hair) with “The Replacements.” Boston Scott and Greg Ward aren’t Ezekiel Elliott and Amari Cooper. Hey, “The Replacements” did beat Dallas to make the playoffs. But that was the movies. This is reality. This pain won’t heal. The Eagles score 20, because I personally need Miles Sanders to score twice — sorry, Matt!

MORE: A review of Carson Wentz's 14 fumbles this season