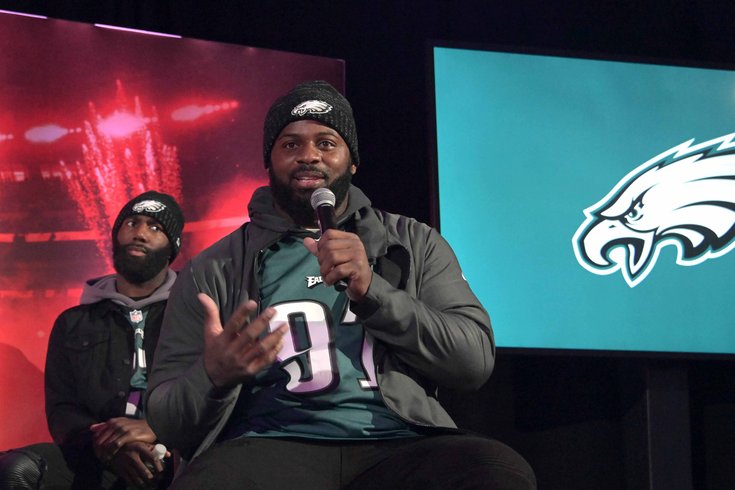 An underrated concern for the Eagles moving forward are the potential declines of Fletcher Cox and Malcolm Jenkins.

In our Eagles chat on Thursday there were a lot of questions that we could not get to in time or other questions we did answer but could use more color. And so, let's do a mailbag post to answer some of the overflow.

Question from Hinkie: Jimmy, would you kindly rank these list of concerns for the Eagles moving forward:

Ooh, I like what you've done here. I think that if I were trying to name five "big picture" concerns like this, I would probably come up with a similar list. My ranking on what you've listed above:

5) Everything Howie Roseman touched in 2017 turned to gold. In 2018 and 2019, it has swung in the other direction. His offseason batting average has been really low, and the Eagles have become one of the oldest teams in the league. They're slow, and they get hurt a lot. In the 2020 NFL Draft, the Eagles are projected to have 10 picks, and they must hit on them. It's their most important draft since 2016.

2) I think there are legitimate concerns about Cox ever becoming the player again that he once was, and I also think that Jenkins, while still good, is clearly regressing.

3) I would add Dallas Goedert to that list as well, but I think the bigger issue is that there aren't enough Goederts, Maddoxes, and Barnetts. The Eagles have more guys like Cox, Jenkins, Jason Kelce, Brandon Brooks, Lane Johnson, etc., who are more likely to fall off of their prime years, than there are guys who are building up to them.

1) This is a concern, obviously, but I think we're all resigned to the notion that this concern is already as bad as it can be, right? They can only go up. I mean, right? Ha. I don't think Alshon Jeffery or Nelson Agholor should ever play another snap for this team again. Whatever it costs to get Jeffery off the roster, so be it. I do think DeSean Jackson should be back, but the team cannot rely on him in any way. Anything he gives you should be viewed as a pleasant surprise. They'll take their financial lumps on the wide receiver position in 2020, but it'll be clean thereafter.

4) Fumbling seemingly should be one of the easier fixes from the quarterback position. It's a hell of lot easier to clean that up than it is to suddenly become smarter at reading defenses, more accurate, or gain more arm strength. So if there's an "ideal" biggest flaw to have, at least this one is fixable. On the other hand, he's in his fourth year in the league, and it's still an issue.

As for Wentz's ceiling, I remember being asked what his ceiling was back in 2017 training camp, and I thought it was "best player in the NFL." I did not expect that to happen ever, much less that year (until he got hurt, obviously), but it did. I think that remains his ceiling. To be clear, I don't think that's what he is. Again, I think that's his "ceiling."

Question from Office Linebacker: Is Sanders in the running for Offensive Rookie of the Year, or does Josh Jacobs have that wrapped up?

Jacobs has it wrapped up, and beyond him, I'd have guys like A.J. Brown (Titans), Terry McLaurin (Washington), and Kyler Murray (Cardinals) comfortably ahead of him as well. But since we're on the topic, I was curious where Sanders ranked among other rookie running backs, and there are only five this season with at least 100 carries. That feels low.

Of that above group, here is how they rank as receivers:

Overall, Sanders has had a good rookie season. It started out a little shaky when he was dancing in the backfield, and trying to bounce everything outside, but his adjustment to the pros has steadily improved throughout the season. He has also quelled a number of concerns such as his ability in pass protection, ball security, and as the numbers above show, catching the football. He's already a good player, and he's only going to get better.

Question from Flipper: Hey Jimmy, I know you've suggested that the Eagles will draft WR in the first round of next year's draft. My question is, which side of the ball SHOULD the Eagles draft? Offense of defense? I think they need to address defense first. The Eagles have drafted offense first in the draft 4 of the past 5 years and apart from maybe Derek Barnett, the defense is sorely in need of more young impact players.

That said, I don't think they should just go into any old draft thinking, "We're getting a wide receiver (or some other position of obvious need) in the first round, no matter what." However, in this particular draft, the wide receiver position is absolutely loaded, perhaps like never before, and oh HEY(!), the Eagles desperately need someone who can make plays on the outside. When you factor in value, need, fit, etc., there's going to be a receiver available in the first round, wherever they're picking, who will make sense. I don't think you can say that about any other position.

And also, you have seen the receivers this year, right? Ha.

Question from Thanos Sapp: I realize Doug has denied it, but it still seems to me like there's a disconnect between the talent evaluators and coaches. The Golden Tate trade and subsequent non-usage last year, then the Genard Avery trade and subsequent disappearance this year, the reluctance to use Greg Ward or Boston Scott until absolutely forced to, all point to something being not quite right in that department. Your thoughts?

I wouldn't put Ward and/or Scott in that "disconnect" bucket, but I do think there are concerns about the trade deadline deals for Tate and Avery, and the staff's inability to incorporate them into the offense/defense. Those guys weren't cheap. Tate, as you all know, cost a third-round pick, and Avery cost a fourth.

It reminds me of the scene in Moneyball where Billy Beane urges Art Howe to start Scott Hatteberg at first base over Carlos Peña.

I'm picturing Howie Roseman going into Jim Schwartz's office telling him to play Avery over Vinny Curry. I kid, I kid. I don't think it's anything like that, though I do wonder how much input the coaches had in these trade deadline deals when they occurred. During the season, it's difficult for coaches to just stop preparing for their next opponent for a day to watch film of 10-15 trade targets to decide whether or not they can find suitable playing time for them.

Whatever disconnect is happening when those deals are made, and clearly there is at least some disconnect there (how can there not be?), I think the onus is on Roseman to only deal for guys who are easy "square peg - square hole" fits. Jay Ajayi was one of those, in 2017. A 6'0, 250-pound edge rusher/linebacker/joker hybrid isn't quite as easy to integrate on the fly.

Question from Andrew Rush: Thoughts on Barnett? Three years into the career - he's missed significant time due to injuries and hasn't really produced at a level we were all hoping for.

I think the injuries are concerning, but when he has played he has been good, in my opinion, especially at a position that historically typically takes a little time to adjust to at the pro level.

This offseason, the Eagles will be tasked with the decision to exercise their fifth-year option on him, or not. You can be nearly 100 percent certain that they will.

Question from Nate: What would be the ideal or easiest route to another Super Bowl win for Philly this year? Just let me dream for a bit.

I would say the easiest path is as follows:

Now get back to reality, Nate.

Question from Hinkie: Jimmy, if all Eagles beats were to engage in an anything goes, Wrestlemania cage match, who would walk out victorious and why?

Ooh, I like that as a podcast topic. I'll earmark that one for like, late February, ha.