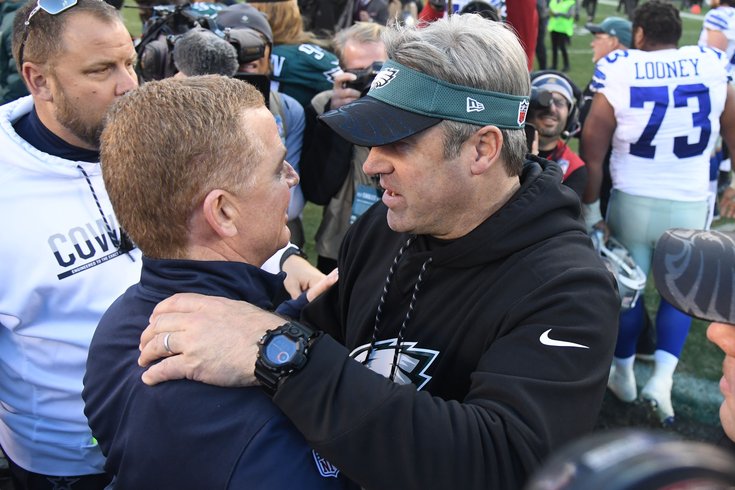 One advantage the Eagles have over the Cowboys is that they employ Doug Pederson, while the Cowboys have a (maybe) lame duck coach in Jason Garrett, but it probably won't be enough.

For the gambling degenerates, here are my Week 16 NFL picks. To note, the team logos indicate who I think will win the game, not cover the spread. At the end of the picks, I'll note a few teams that I like based on the spread.

Texans (-3) at Buccaneers: This Bucs team might actually be... good? They certainly haven't quit on the season, and they'll host a Texans team that the NFL unfairly scheduled to play a road game on a short week after another road game. What kind of BS is that?

Actually, the Bills and Rams also got similarly screwed.

Bills at Patri*ts (-6.5): When even Bill Simmons knows the Patri*ts are cheating and has no defense for them at all, it's bad.

What an absolutely loathsome franchise.

Rams at 49ers (-6.5): I was nervous about that Falcons game for the 49ers a week ago, and I'd be nervous about this one as well. The Rams got it handed to them by the Cowboys on Sunday, but that's not the first time this year that has happened.

In other words, the Rams have shown they can rebound from embarrassing losses. I'm picking the Niners to win, but that 6.5-point spread would scare me.

Jaguars at Falcons (-7): When I first sat down to write my picks post this week, I couldn't wait to take the Falcons with a favorable spread over a playoff contender. I was disappointed to see that they have the Jags at home. Bleh. Pass.

Ravens (-10) at Browns: The Browns are a hot mess right now.

Bengals (-1) at Dolphins, and Giants at Washington (-2): Let's just lump these two games together, because they both have HUUUUUGE draft order implications. As always, per our friends at Tankathon, here's what the draft order would be if the season ended prior to Week 16. 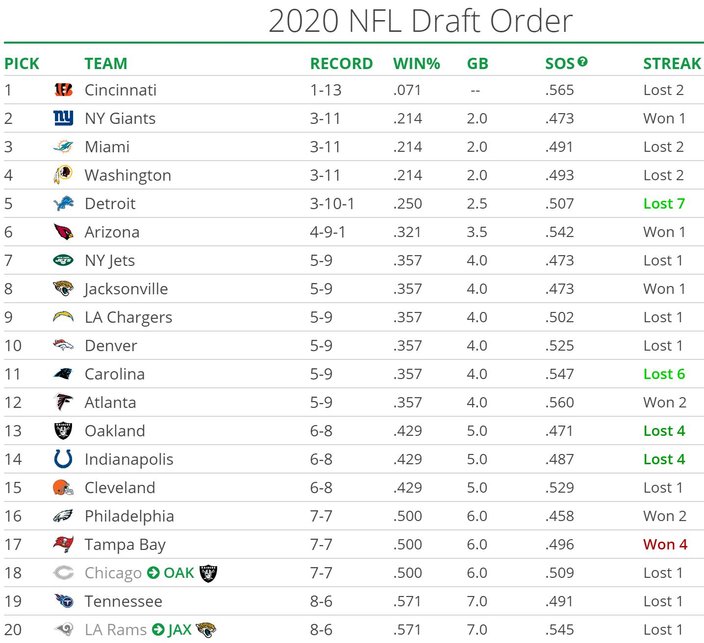 All four of these teams have been dead for months. Just give me the two home teams, I guess.

Steelers (-3) at Jets: That "Duck" quarterback on the Steelers stinks, and I was really tempted to take the Jets to beat the Steelers here, but I just can't get past the overwhelming edge the Steelers' D-line will have over the Jets' O-line.

Saints (-2.5) at Titans: Drew Brees has always killed it in November every year. Well, since he missed five games earlier this year, this is kind of like his November. #Science.

Lions at Broncos (-6.5): The Lions might currently be the worst team in the NFL right now, and it's hilarious that Matt Patricia and Bob Quinn are going to keep their jobs.

Raiders at Chargers (-6.5): The Raiders have the fourth-worst point differential in the NFL, at -112. The only teams that are worse are the Dolphins, Bengals, and Washington. Meanwhile, despite a 5-9 record, the Chargers are actually +9.

Cowboys (-1.5) at Eagles: This line was Cowboys (-2.5) before news emerged that Dak Prescott has an injured shoulder. I don't think anyone realistically believes that he won't play on Sunday, but maybe his shoulder injury will significantly hamper him from throwing the ball down the field.

Cardinals at Seahawks (-9.5): This game doesn't really matter to the Seahawks in terms of winning the division, though it could have first-round bye implications.

Chiefs (-6) at Bears: This probably looked like an attractive Week 16 game for NBC before the start of the season. Andy vs. Nagy, Mahomes vs. Trubisky. And now they're stuck with it.

Packers at Vikings (-5.5): (In Joe Tessitore voice)... "In MY VIEW, the Vikings are significantly better than the Packers, EVEN THOUGH THE PACKERS will very likely still win the THE NFC NORTH EVEN IF THEY LOSE!"