Report: Eagles to hire Marquand Manuel to be their defensive backs coach 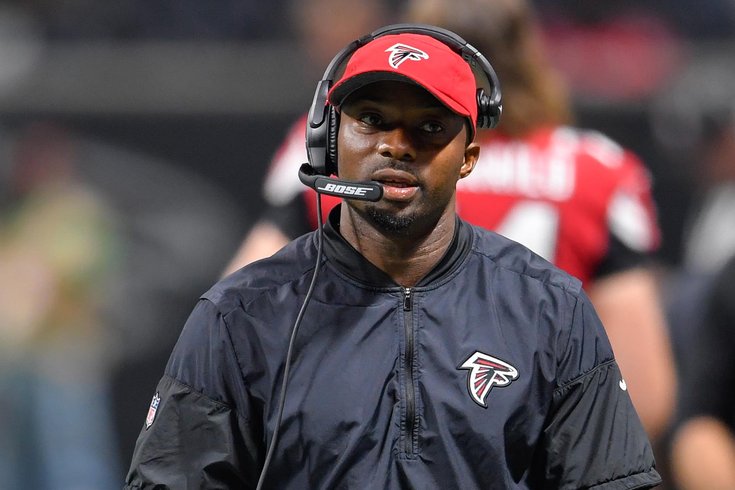 According to a report from Jeremy Fowler of ESPN, the Philadelphia Eagles have hired former Atlanta Falcons defensive coordinator Marquand Manuel to be their new defensive backs coach.

Eagles have interviewed former Falcons defensive coordinator Marquand Manuel for defensive backs coach and a deal could happen as early as today, per source. Manuel was a key member of Atlanta’s defense during Super Bowl run, can help a Philly secondary that needs it.

Many of Doug Pederson's coaching hires have been former players, and Manuel fits that theme. He was something of a journeyman safety, playing for six teams in eight seasons. Let's just go ahead and copy and paste his playing career from Wikipedia:

If you'll note, in Manuel's last season the league, he played for Jim Schwartz. As a coach, once again, let's just copy and paste again from Wikipedia:

As you can see, Manuel's rise up the coaching ranks has been steady and consistent, until he was fired as the Falcons' defensive coordinator after an abysmal 2018 season. From an outsider's perspective, it's difficult to assign kudos or blame for Manuel's tenure, seeing as the Falcons' defense is essentially the brainchild of head coach Dan Quinn, though Manuel did have play-calling duties.

In 2017, the Falcons were 22nd in DVOA, up from 27th the year before. In 2018, however, after suffering a number of crippling injuries early in the season, most notably to star linebacker Deion Jones and both starting safeties, the Falcons' defense regressed badly, finishing 31st in DVOA.

Manuel has some success stories in the Falcons' secondary. Desmond Trufant made his lone Pro Bowl appearance in 2015 in his first season playing under Manuel. Trufant and Robert Alford formed one of the better corner duos in the league during Manuel's tenure. He also helped develop starting safety Keanu Neal, and some later-round guys like Damontae Kazee and Ricardo Allen. It's perhaps also worth mentioning that under Manuel, troubled second-round corner Jalen Collins showed some promise before a series of suspensions derailed his career.

In Philly, Manuel will have the task of getting a number of new faces all on the same page, as the Eagles are likely to have turnover in their secondary this offseason. He will also have an opportunity to jump-start the careers of Sidney Jones and/or Rasul Douglas, a pair of 2017 draftees who have not lived up to expectations, if they're back with the team in 2020. Perhaps a new voice can produce better results.