A look at the proposed NFL rule changes, and how they may affect the Eagles 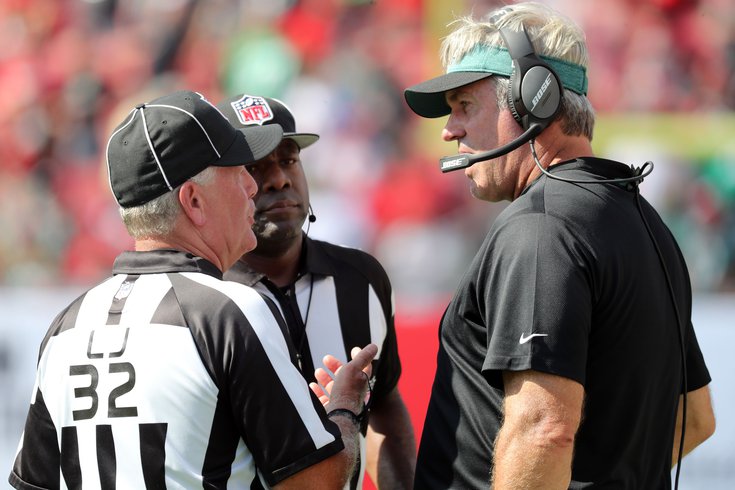 The NFL revealed on Tuesday that there are seven new rule changes up for consideration at the 2020 Owners Meetings, four of which were proposed by the Philadelphia Eagles. Let's look at all seven, and determine whether or not they're good ideas, and how they might affect the Eagles.

Here’s a look at the 2020 rules change proposals submitted by the clubs: https://t.co/Wkwst9sraf pic.twitter.com/mTm5YTk86P

Of course, this is a correction to the absolutely horrendous call made against the Buffalo Bills' Cody Ford in the wildcard round of the playoffs.

Does it affect the Eagles specifically? The Eagles did a nice job of making sure not to cause forceable contact on these types of blind side blocks, as they would often sort of set picks, NBA-style. They didn't have a single blind side block penalty called on them all year, so it really doesn't help them, necessarily.

2) Make permanent the expansion of automatic replay reviews to include scoring plays and turnovers negated by a foul, and any successful or unsuccessful try attempt.

Currently, all scoring plays and turnovers are reviewed only if the call on the field counts as a score or turnover, which is stupid, and should include plays that would have otherwise been scores if not for penalties negating them.

3) Provide an alternative to the onside kick that would allow a team who is trailing in the game an opportunity to maintain possession of the ball after scoring (4th and 15 from the kicking team’s 25-yard line).

I think it'll take some time for the old heads to come around on this idea, but I doubt it passes. Back in the day, onsides kicks used to be recovered with a much higher frequency than they are in today's game, as a result of some player safety rule changes. Changing to the 4th and 15 system would get it back to a success rate closer to onsides kicks of yesteryear. That's explained in better detail here.

Good rule change? I love it. When the receiving team knows an onsides kick is coming, there's almost nothing fun about it. I mean, even on the now very unlikely chance the kicking team recovers the onsides kick, it's almost always just a pile-up, while the viewer waits for the officials to signal who has the ball. What's fun about that? A 4th and 15 scenario is so much more dramatic.

Does it affect the Eagles specifically? Yes! I know a common thinking might be that the Eagles allow a lot of long 3rd/4th downs, but I would disagree there, at least from a distance of 15 yards, which is "sticks defense" territory, which contrary to popular opinion, is quite effective.

More importantly, the Eagles have a quarterback with a rifle arm capable of making tough throws down the field, so this rule change would absolutely benefit the Eagles, in my view. Presumably, they'll field better receivers going forward than they did in 2019.

4) Restore preseason and regular season overtime to 15 minutes and implement rules to minimize the impact of the overtime coin toss.

I don't know why the NFL changed it from 15 minutes to 10 minutes in the first place. I remember back in 2018 in an Eagles-Cowboys game, Dallas won the toss, and put together an 8-plus minute drive that ultimately resulted in a walk-off touchdown. The Eagles never got the ball, and even if they had, they wouldn't have had much time to match the Cowboys' score if they had kicked a field goal.

Good rule change? Yes. The recent tweaks that the NFL made to the previous "sudden death" overtime rules that allowed for an opening drive field goal to just end the game right then and there were improvements, but they did not go far enough. A flip of the coin still holds far too much weight on the outcome of a game. To be determined what the Eagles or the rest of the league have in mind as a solution to this problem.

5) Provide the option to the defense for the game clock to start on the referee’s signal if the defense declines an offensive penalty that occurs late in either half.

Yeah, the offense shouldn't benefit from a declined penalty in those situations.

6) Add a “booth umpire” as an eighth game official to the officiating crew.

The view from up top is just so much different than it is on the field sometimes, and it's asinine not to use that vantage point to identify obvious calls that everyone in the stadium can see that the guys at field level might miss.

Good rule change? Yep. The ill-fated AAF was a failure, but one of the things they had right was the use of a "Sky Judge," that was very effective. There was a play, for example, in which a defender (Duke Thomas) had a dangerous hit on a defenseless receiver that was missed on the field, but was quickly corrected by the Sky Judge.

7) Add a Senior Technology Advisor to the Referee to assist the officiating crew.

Uh, OK. What does that mean? Via ESPN's Kevin Seifert:

Alright, that's not super-clear, but whatevs.

Good rule change? Sure, why not. I love technology, always and forever.