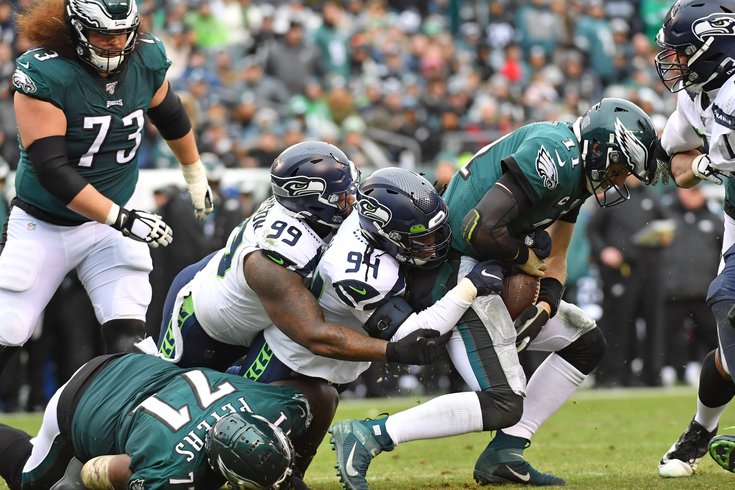 Carson Wentz and Josh McCown were sacked 44 times in 2019.

Including the playoffs, the Philadelphia Eagles allowed 44 sacks during the 2019 season. We went back and took a look at all 44, and assigned "blame" for each one.

On 22 of them, we determined that the "blame" fell on one of the following:

• While he did get beaten on the "Tecmo Bowl" play shown in the Twitter thread, we did not identify any plays in which Brandon Brooks got beaten for a sack. He was arguably the best OG in the game in 2019.

• Lane Johnson was also stellar. He gave up just one sack on the season, like he did in 2017. To only give up one sack in an entire season in two of the last three years is remarkable.

• Like Brooks above, Jason Kelce was partly to blame for the "Tecmo Bowl" play, but he did not get beaten for a sack otherwise all season. We did place blame on him for one sack as a result of a bad snap.

• Isaac Seumalo had an absolutely dreadful game against the Falcons Week 2, which we detailed in September. Thereafter, Seumalo put together a solid season, allowing just one half-sack the rest of the way.

• Jason Peters is still an above average starting LT at 38 years of age, but it's clear to see that he is not the player he once was, and at some point, his decline will accelerate. The three sacks he allowed on the season is well below the league average for a starting LT, but his 10 penalties (mostly false starts) were often drive killers.

• Andre Dillard gave up 6.5 sacks in just 183 pass blocking snaps. That's... not good. And it's not as if there was some sort of gray area on those plays. He was definitively beaten, often badly, and he gave up at least one sack in every game that he saw extended action.

The sacks aside, he was very bad in three games, against the Vikings, Cowboys, and Seahawks, giving up pressures in bulk that did not lead to sacks. He was better against the Bills and Bears, but as you can see, there were still some obviously bad moments in those games.

You can maybe excuse the Vikings matchup because he entered that game mid-way through, or the Seahawks game, because he was playing kinda-sorta out of position at right tackle. But certainly, if you're the Eagles, you would have preferred to see some more "dog" in him in those games. Instead, he often appeared to be far too passive. For example:

A few weeks ago, Jeff McLane of the Philadelphia Inquirer reported that the team has concerns about Dillard's readiness to take over as the full-time starting LT.

Another year with Peters would allow Dillard to watch and learn and likely play enough to continue his development. He hasn’t made as much progress as the Eagles had hoped when they moved up to draft him in the first round last year. Dillard needs to get stronger, both physically and mentally.

Eagles coaches still believe in Dillard. He has the necessary athleticism. But bringing Peters back, despite the message it would send about Dillard’s future, would give the 24-year-old some additional time in an NFL culture he struggled to adapt to as a rookie.

While the right move is probably to allow Dillard to sink or swim in 2020, it is certainly understandable why some would be more comfortable if Peters returned for one more season, based on what Dillard showed in 2019.

• They weren't shown in the Twitter thread, but we covered Carson Wentz's fumbling issues during the season. The majority of his fumbles came when he was either careless with the football (two hands!) or when he was trying to do too much with a dead play. That's probably the one aspect of his game that Wentz needs to correct the most heading into 2020.