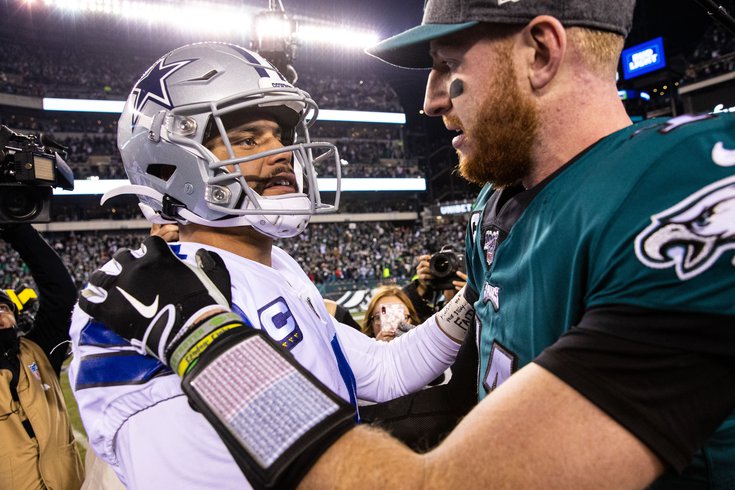 Dak Prescott has put himself in a position to command a much bigger payday than the one Carson Wentz received a year ago.

There isn't much in the way of Philadelphia Eagles news lately, so let's take a look around at what the Dallas Cowboys, New York Giants, and the Washington team are up to.

On Friday of last week, Calvin Watkins of The Dallas Morning News reported that "the Cowboys offered Prescott an average salary of $33 million with a guaranteed contract of $105 million." On Sunday, Mike Fisher of Sports Illustrated's Cowboys site reported that their offer was actually "in excess" of the numbers being reported by Watkins.

Wow, in excess of $105 million guaranteed? How can Prescott turn that down?!?

Well, pretty easily, actually, as he took on the the risk of playing the 2019 season without a new contract, helped his value, and now holds a considerable amount of leverage in contract negotiations.

Ultimately, no matter what the numbers are, it's all noise without knowing the number of years being offered. The Cowboys would love to lock up Prescott for five or more years, with the salary cap expected to explode over that time. Good luck.

As always, Joel Corry from CBS Sports provides outstanding, easy-to-read detailed context on Prescott's situation, in which he notes the costs to use the franchise tag over the next three years.

Although a player hasn't been designated three times since the three franchise tag limitation was implemented in the 2006 CBA, this fact may not stop France from using the prospect of Prescott being franchised multiple times as justification for seeking a deal averaging significantly more than Wilson's $35 million per year especially if Dallas is insistent on a lengthy deal. Prescott would make just over $123.75 million with three straight franchise tags.

Translation: Offers of anything close to the roughly $32-33 million per year deals signed by Carson Wentz and Jared Goff prior to the 2019 season are laughable, given Prescott's leverage.

The Cowboys have until Thursday to use the franchise tag on Prescott.

Prior to the 2019 season, Trent Williams steadfastly communicated that he was never going to play for Washington again. Rather than cut his losses and acquire valuable assets in a trade for Williams, Bruce Allen instead just let Williams (and the situation as a whole) rot for a season. Williams' value has no doubt decreased significantly over the last year, as he is a year older (he'll turn 32 in July), a year removed from playing, and he's now also requiring a new contract.

One of new head coach Ron Rivera's first priorities was to communicate with Williams, which was a positive step in mending the relationship between Williams and the team. With Williams evidently maintaining that he'd prefer to be elsewhere, Rivera will allow Williams to seek a trade, showing a diplomatic shift in front office behavior, per JP Finlay of NBC Washington.

The guess here is that Williams will go to a contender for something close to a third-round pick.

Giants are expected to be in on Cowboys CB Byron Jones

Per Tony Pauline of ProFootballNetwork, the Giants could get into a bidding war with the Eagles for Byron Jones, via a mailbag post.

What have you heard about the Philadelphia Eagles and Byron Jones?

Throughout the week of the NFL Combine, everything I heard pointed to the Philadelphia Eagles being the favorite for CB Byron Jones. Then late in the weekend, someone told me to “expect the Eagles and New York Giants to get into a bidding war for Jones.” As I reported last week – Jones is going to make a lot of money and he’ll be able to pick the team he wants to play for.

That makes sense. If you think the Eagles' corners were bad in 2019, the Giants' were probably worse, especially after they (rightfully) released Janoris Jenkins for initially using a slur on Twitter, and then being unapologetic for it thereafter.

Money being equal, the Eagles would seemingly be a more desirable destination, with an established "player-friendly" coach in Doug Pederson, and you know, a far better chance of competing for a Super Bowl.