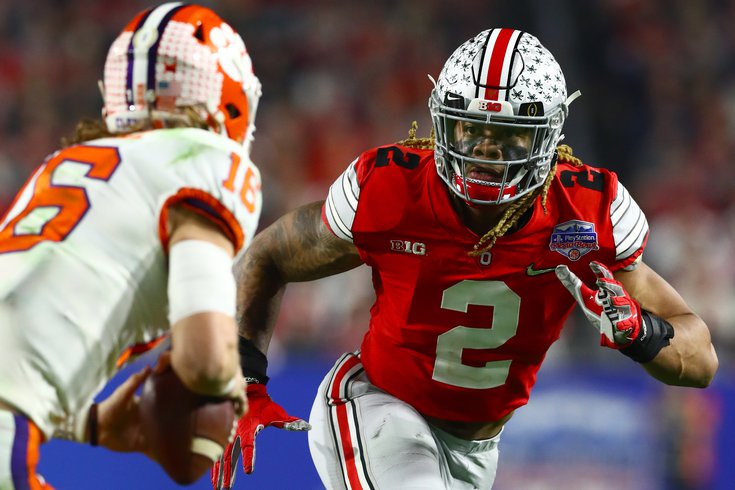 ATLANTIC CITY, N.J. — Midnight green adorns his Hyattsville, Maryland, bedroom. It’s a Philadelphia Eagles shrine in semi-Southern parts. There are pictures of him as a kid, running around wearing a Michael Vick jersey.

You can say Chase Young stood out in Washington Redskins’ country—both on and off the field.

On the field, the 6-foot-7, 265-pound edge rusher from Ohio State was a major talent at DeMatha Catholic, in Hyattsville, before the nation was introduced to him.

Off the field, he bore the scorn of his childhood buddies and anyone else in the vicinity every time the Eagles played the hometown Redskins—because Young grew up a major Eagles fan.

“When Chase was young, he met (former Buckeye and Eagles’ running back) Keith Byars, and at the time, Chase didn’t know who he was,” recalled Greg Young, Chase’s father. “I told Chase that was Keith Byars. He played for the Eagles. That started it.

“Then, when Michael Vick went to the Eagles, he became a huge fan. His bedroom has Eagles stuff all over it. His whole room was painted in Eagles’ colors. He had an Eagles blanket and everything.”

A month from now, the Eagles and their fans would love to see Young adorning a midnight green jersey once again when he gets his name called in the first round of the NFL Draft on Thursday, April 23 in Las Vegas by NFL Commissioner Roger Goodell.

But that won’t happen for Young, who is in Atlantic City this Friday to receive the Maxwell Football Club’s Chuck Bednarik Award as college football’s most outstanding defensive player.

Young will be long gone by the time the Eagles are scheduled to pick at No. 21. And though LSU quarterback Joe Burrow is projected to be the No. 1 overall pick in the draft by the Cincinnati Bengals, most experts believe that Chase Young is the best player in the draft.

There are plenty of good reasons for that.

Last season, Young, a finalist for the Heisman Trophy and just the ninth defensive player out of 159 total finalists since 1982, was a one-man wrecking crew for the Buckeyes. He led the nation in quarterback sacks (16.5), sacks per game (1.38), forced fumbles (six) and forced fumbles per game (0.50).

He should not go any lower than two.

That means his bedroom’s color scheme will change. All mock NFL Draft boards have Young returning home, as the second pick overall to the Washington Redskins—meaning problems for the Eagles.

Chase Young himself envisioned that he would one day play in the NFL — whether that was for the Eagles or against them.

When you enter the league, you have to put away the childhood things. I loved the Eagles as a kid—I still do. That was my team... But when I get drafted, let’s say a lot of things will have to change.

“During this (draft process), I think I learned that if you keep working hard and stay dedicated to this game, you can definitely get what you want out of it,” Chase Young said. “God has blessed me with talent, and I’m going to continue working on making that talent great.

“Four years ago, I visualized this. I think that’s what you have to do. You have to imagine yourself walking up on that stage being a first-round pick. I feel like you have to visualize yourself being the best to be the best.”

“Chase is 20—he’s going to grow more. Everyone in my family grew late. And there’s doubts out there. We all welcome the doubters. Chase was 5-6, 160 as a freshman in high school.”

That’s what started Chase. He started as a quarterback and outside linebacker as a freshman at St. Vincent Pallotti High School, in Laurel, Maryland. What launched Chase as a disruptive defensive end came in his freshman year in a game against the John Carroll School in Washington, D.C.

John Carroll ran a Wing-T and Chase couldn’t find the ball. The Pallotti head coach turned to Greg asked him what to do about Chase, though a freshman, he was still the best player on the field.

Greg told him to move Chase to defensive end.

Chase never played quarterback or outside linebacker again, and eventually transferred to DeMatha to finish his high school career, winning a state championship in his senior season.

Chase, whose mother Carla is 6-foot, used to always ask his parents when he was going to grow. He sprouted to 6-feet during his freshman year, and hit 6-3 by the middle of his sophomore year.

“When you enter the league, you have to put away the childhood things,” Chase said. “I loved the Eagles as a kid—I still do. That was my team. I loved the guys who played for them.

“But when I get drafted, let’s say a lot of things will have to change. I know there will be expectations. I’m okay with that. I’ll be in the league now with a lot of things still to prove. That’s something that will never change.”

Kyle Adkins, the 2019 PhillyVoice High School Coach of the Year, has left Archbishop Wood High School to accept the linebackers coach job at Ursinus College. In his second year as head coach, Adkins led an undermanned Wood to the 2019 PIAA 5A state championship.