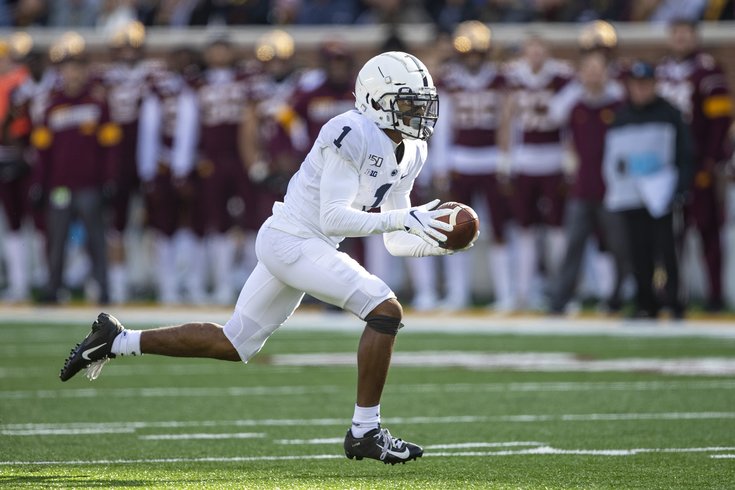 As a reminder, the Eagles are projected to have 10 draft picks this year, with two in the third round, and three in the fourth, depending on how compensatory pick projections go. Also, be sure to check out our previous editions:

We'll call this version the one where all the receivers worth taking in the first round are gone, and Epenesa is the kind of guy who you know they'll like. To begin, he's a DE, and the Eagles like those, seeing as they've drafted at least one of them in each of the last 9 drafts. But also, Epenesa was very productive in college, registering 22 sacks, 8 forced fumbles, 6 batted passes, and 30.5 tackles for loss the last two seasons. He managed 11.5 sacks in 2019, despite being the focus of the opposing offense's attention.

While I believe that the Eagles will shy away from college production players at some positions after some failed picks, like Donnel Pumphrey, for example, they still believe that players who get sacks in college get sacks in the NFL.

Epenesa has great size and power, who wins with hand fighting and bull rushes, and who finishes at the quarterback whose those opportunities present themselves. As expected, Epenesa didn't wow anyone during his Combine workouts, running a 5.04 40. However, you can see that he does have some explosiveness when the pads go on.

The Eagles have their starters in the aging Brandon Graham, and Derek Barnett. They also have a slew of guys after them in Josh Sweat, Genard Avery, Shareef Miller, Joe Ostman, and Daeshon Hall, none of whom would prevent me from taking a worthwhile DE with some inside versatility.

Anything other than wide receiver in the first round will no doubt disappoint a large number of Eagles fans, which is understandable, but I can absolutely see them going defensive line if the cost to trade up is too prohibitive and the value of the available players at 21 just isn't there.

If indeed the first round plays out in a way in which the Eagles don't draft a wide receiver, there should still be good ones to choose from in Round 2. It looks like the following receivers could maybe be had in Round 2:

One of those guys is likely fall, and the dream scenario for the Eagles, who as you know are desperate for speed in their offense, would be Hamler.

You all probably know who Hamler is, but if not, his game is all about speed. He's probably best suited for slot work in the NFL, but can probably play some on the outside as well, as he's difficult to jam because of his shiftiness.

Hamler comes with some concerns, like his small size and questionable hands, so he won't be for everyone, but the Eagles would be huge beneficiaries if he fell to them in Round 2.

As a redshirt sophomore in 2018, Hennessy began wearing a single-digit number (No. 3), which Temple awards to the toughest players on the team. (Being a center, Hennessy can't wear the No. 3 during games, but he wears it during practice and on his helmet.)

He is thought of as very smart player and person (check out the Inquirer's Marc Narducci's piece on Hennessy here), but he is also a very athletic lineman. Here's his game in 2018 against Boston College:

While there is no replacement for the type of unparalleled athleticism Jason Kelce has displayed over his career, Hennessy is tough, smart, and brings well above average athleticism to the table that would allow the Eagles to continue to run a lot of their same run concepts whenever Kelce retires. His spider chart:

Hennessy could very well go Round 2. I think he goes early in Round 3, but if he slides he'd make a ton of sense.

Davis-Gaither is a smaller, athletic linebacker with good coverage skills, who looks a little more like a big safety than a linebacker. In 2018, he had 7 pass breakups, which was eighth in the nation among non defensive backs. He had 8 pass breakups in 2019, and an INT, which shows some consistency in coverage.

He reminds me a little of meaner Kamu Grugier-Hill, in that he has the athleticism to contribute immediately as a core special teamer, but the Eagles would certainly want him to bulk up a bit before they use him in a prominent role in the regular defense.

I love this guy. To begin, in three season at Louisiana Tech, Robertson has filled up the stat sheet across the board, particularly with a high number of interceptions and pass breakups:

It's not often you see a guy with the type of tackle, tackle for loss, and interception combination that Robertson has. At 5'9, 183, Robertson doesn't have ideal size, but he sure as hell doesn't play small.

Most teams will view Robertson as a slot corner at the next level, but I wonder if the Eagles might view him as a safety. If he's there on Day 3, just take him and figure it out.

Kelley was impressive at the Senior Bowl, showing off some burst, running through contact and getting to the second level. He also looked confident as a receiver. At the Combine, that burst was confirmed, when he ran a 4.49 40. Over the last two years, Kelley has produced a pair of 1000-plus yard seasons in Chip Kelly's offense, but on a low yards per carry average (for a college prospect):

That low YPC average could make him available into Day 3, but in my view, he can play. A highlight reel:

Kelley is a back who can do a lot of the same things as Miles Sanders, and can be something of an interchangeable piece.

Blackmon played his first three seasons at Utah at corner, and he moved to safety for his senior season. Of course, any safety with corner experience in their background is going to be of interest to Jim Schwartz. Watch him attack with speed downhill:

Blackmon has some pretty ugly tape early in his transition to safety, but got much better as he has eased into his new role. In 12 games in 2019, he had 60 tackles, 4 INTs, 2 FFs, and 1.5 sacks, before he tore an ACL in December. He believes he'll be fully healthy again in mid-October.

I believe that any team that drafts him has to do so expecting to redshirt him his rookie season. That makes more sense to me at the back end of the fourth round, as opposed to, you know, the second round.

As a ball hawking player with good speed, he would make sense in the Rodney McLeod role in the Eagles' defense.

Davis is short and he has small arms, which is why he'll drop to Day 3 of the draft, but he is also very strong and very fast:

Here he is running his 40 with his twin brother. It's kind of incredible that a 300-plus pound guy can move this fast:

Davis is also productive, as he had 8 sacks in 2019, and as noted above, the Eagles believe that college players who get sacks become NFL players who get sacks. He is probably too small to be a three-down player, but I like him as a rotational defensive tackle who can give opposing offensive linemen something of change of pace to have to deal with.

Montez is big, he has a strong arm, and he showed off some athleticism at the Combine:

That's good enough for me in terms of linking the Eagles' interest to him, given the quarterbacks the Eagles have had in camp or on their roster the last couple of years:

The Eagles clearly have "a type" that they like at quarterback, and Montez fits it at 6'4, 240.

If the Eagles bring back Nate Sudfeld and also think of him as their No. 2 quarterback heading into 2020, then it would make sense for them to draft a late round developmental guy, like Montez, and try to correct some of his accuracy and pocket concerns.

Montez is a prospect worth taking a shot on in the fifth round, as opposed to Clayton Thorson.

Sullivan is a wide receiver-turned-tight end who didn't get many opportunities in LSU's star-studded offense, but he was impressive during the week of Senior Bowl practices. Linebackers couldn't cover him (not surprising), and he looked decent as a blocker (surprisingly).

The Eagles would be smart to draft a tight end on Day 3, if they're going to commit to a two-TE offense, and Sullivan makes sense as a guy the staff can develop over time.