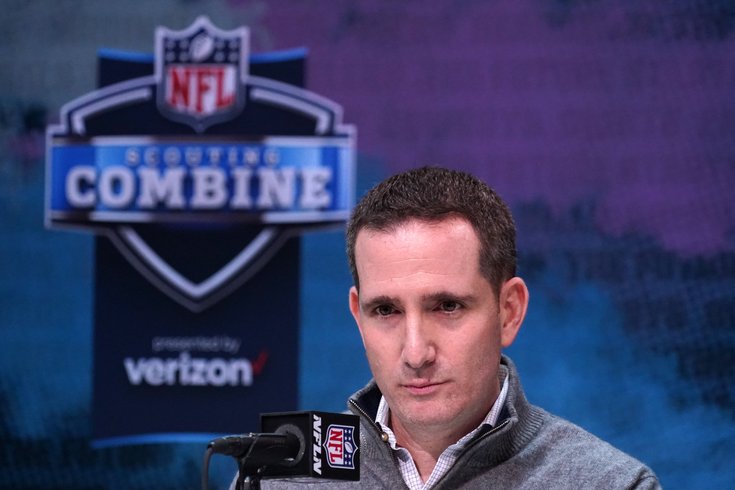 "These are not the receivers you're looking for."

The Philadelphia Eagles tend to move around in the first round more than most. Here we'll recap the last 21 years (since the beginning of the Andy Reid era), showing the Eagles' moves in the first round of the draft, and then we'll determine their best course of action in the 2019 NFL Draft:

The best players are probably still from the "trade up" group.

So what will the Eagles do this year?

The Eagles are currently slated to pick 21st in the 2020 NFL Draft. While their need for cheap talent and an infusion of good young players remain, I believe the Eagles will be looking for an impact player in the first round.

"When we look back and we look at our drafts, specifically looking at where we were in the 20's, we've had some good success at 20 and higher," said Howie Roseman, speaking at the 2017 Senior Bowl, an offseason in which the Eagles held the 14th overall pick. "I think there is a line where you don't get a difference maker. This is your opportunity, in the first round of the draft, to find a difference-making player. That's our first priority, is bringing in a difference maker to the Philadelphia Eagles.

"By trading back and getting extra picks, but not having somebody who can affect the game... I mean, you're watching these championship games, and you're seeing that there are difference makers making big plays in these games, so we need to make sure that we come out of (the draft) with that."

That quote is now three years old, but I do believe it remains Roseman's philosophy today.

In the 2020 NFL Draft, the Eagles' biggest obvious need is at wide receiver, and while the pre-draft process still has a long way to go, the triumvirate of Oklahoma's CeeDee Lamb, Alabama's Jerry Jeudy, and Alabama's Henry Ruggs appear to be in something of the top tier of a loaded receiver class. The belief here is that none of those three receivers will still be available when the Eagles are selecting at pick 21, but if one slides into the middle-to-late teens, a reasonable projection, then the Eagles should be interested in moving up for any of the three. (It's probably also worth noting here that some teams picking behind the Eagles have needs at wide receiver, and could also be interesting in moving up, most notably the Buffalo Bills, who are picking 22nd.)

The question for the 2020 NFL Draft, like with any draft, is where is the line between the impact players, and the dropoff? While the 2020 NFL Draft is thought to be a deep and talented one, my sense is that Roseman will still want to get up into the teens from the Eagles' spot at pick 21. The disastrous 2014 draft in which Eagles targets flew off the board before the Birds eventually settled on trading back and drafting Marcus Smith no doubt was a lesson learned for Roseman.

The Eagles are currently projected to have 10 picks in April. Will they use them all on players, or will some picks be sacrificed to increase the odds of their first pick becoming an impact player?

"As we sit here, we’d love to say that we’re going to be having 10 picks, but there were moments in the last two drafts where there were guys within reach that we wanted to move up for, but we just didn’t have the ammunition to do it," Roseman said on Tuesday at the NFL Combine. "If we thought there was a guy who is extremely, incredibly valued, and we thought we could go up and go get him, we can’t take that off the table."

Roseman will have the ammo to move up this year, and I expect the Eagles to be aggressive on Day 1 of the draft, like they usually are.