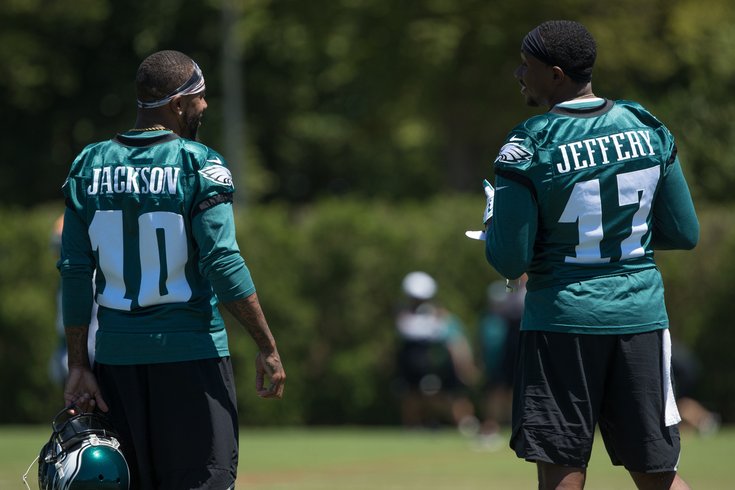 With the entire football world descending on Indianapolis this week for the NFL Scouting Combine, it feels like there's finally fresh Eagles news for the first time in weeks.

That's because on Tuesday, both Doug Pederson and Howie Roseman spoke to the media and answered questions on a variety of topics, from their offseason plans to the reshuffled coaching staff and everything in between. Before we take a look at what they're saying about the Eagles, here's a recap of some of our recent stories coming out of the back-and-forth with Philly's coach and general manager:

But that was only a small sample of what was discussed on Tuesday. Let's take a look around at some other takeaways from that media availability, as well as some other topics that have been dominating Eagles coverage recently...

There's been a lot of talk this offseason about whether or not the Eagles will try to move on from Alshon Jeffery — we previously covered all their options in depth — and it seems like new stories regarding the veteran wideout are coming out every couple of days. The latest round, however, unlike much of what's been written this offseason came from the Eagles top two decision makers: Roseman and Pederson.

Pederson told reporters on Tuesday that there was nothing to reports that Alshon and quarterback don't get along.

"There were no issues between those two," the Eagles coach said.

Still, that doesn't mean the Eagles will bring Jeffery back for another season following a disappointing 2019, both on and off the fiend. The team already publicly stated that they're trying to get younger and healthier, and those comments don't bode well for Jeffery, who is 30 years old and missed significant time this season with injuries, including a season-ending Lisfranc fracture that will keep him out for most of the offseason.

While much of the talk has been about Jeffery, DeSean Jackson finds himself in a similar situation, getting older and becoming more of an injury liability, which is hard to argue with after the 33-year-old receiver missed nearly all of the 2019 season. And, sure, he just signed a three-year deal in free agency last offseason, but his health alone — he's already fully recovered from his season-ending abdominal injury — makes him considerably easier to move.

On top of that, when Pederson was asked about their futures in Philly in contrast to Roseman's previous comments about getting younger, he didn't exactly give a ringing endorsement.

Jeffery and Jackson’s futures with the team also are uncertain, but both have contracts that make it difficult for the Eagles to trade or release them. ...

Roseman has said the Eagles want to get younger and faster and healthier. Jackson fits only one of those three criteria.

"We’re trying to balance," the Eagles GM said Tuesday. "We have good players who are not 23 and 24 years old. When you look at who’s winning, and even when we won [in 2017], you’re going to have players that are still in their prime that are 29 or 30 or 30-plus that can still contribute.

If the Eagles get rid of Jeffery, it would likely be a welcome move by the fan base at this point. Parting ways with DeSean (again) would be a bit more disappointing, especially after all the preseason hype last year and his explosive performance in the Birds' Week 1 win over Washington.

Press Taylor may not have gotten the offensive coordinator job this offseason, but with the Eagles opting not to go with a traditional offensive coaching structure and ditching that position all together, he got the next best thing. Taylor, 32, will be the Eagles passing game coordinator, a move that Pederson felt was necessary in order to help the up-and-coming coach continue to grow.

And just because he didn't get named coordinator this time around doesn't mean that Pederson doesn't see that path for him in the future. In fact, the Eagles head coach said he's trying to groom Taylor the same way Andy Reid groomed him in his early days as an NFL assistant.

“I really felt that in order for Press to grow, I’ve got to give him more as a coach,” Pederson said at the NFL Scouting Combine on Tuesday. “I’ve got to put more on his plate. I still want him in the QBs room. I still want him to be around Carson and the guys. He’s done an outstanding job there.”

While hiring Rich Scangarello as a senior offensive assistant was an undoubtedly important move this offseason, Pederson on Tuesday revealed that he’s leaning toward letting Taylor lead offensive meetings during the season, a sign of how much he thinks of the young assistant.

Taylor will still work extensively with Carson Wentz and the other quarterbacks on the team — he’s had pretty good success with Wentz and Nick Foles — but the promotion was made with the idea that Taylor will now have much more influence on game-planning. Previously, Taylor had been responsible for the red zone portion of planning but will now see his duties as a game-planner expanded to all other areas.

“I really feel like Press has a bright future as a coordinator, so I’m trying to groom him the way Andy (Reid) did with me and brought me along,” Pederson said.  [nbcsports.com]

On Tuesday, both Doug Pederson and Howie Roseman said they'd welcome Jason Peters back in the fold for another season. And while that's a nice vote of support for the future Hall-of-Fame left tackle, it's also a massive indictment of last year's first-round pick Andre Dillard, who struggled filling in in his rookie season.

Here's more from BGN's Brandon Lee Gowton, who thinks it's shortsighted to bring Peters back for another season rather than allowing Dillard to grow into the role he dominated in during his college days:

Even assuming Dillard is a downgrade from Peters, the equation shouldn’t be that simple for the Eagles. Roseman has admitted the team needs to get younger. He’s also talked about how his loyalty to the team’s veterans has been a “weakness.” Most recently, Roseman said the Eagles aren’t trying to go all in on the 2020 season as much as they’re trying to consider a three-year window from 2020 through 2022. If that’s truly the case, it doesn’t make sense for the Eagles to block Dillard from playing while paying a good chunk of cap space to bring Peters back.

It’ll be truly concerning if Dillard isn’t ready to be the Eagles’ starting left tackle in 2020. Otherwise, the Eagles will have traded up for a player in the first round who isn’t even at least a true swing tackle by Year 2 since he can’t play on the right side. And it’s not like Dillard’s this extremely raw and undeveloped prospect; he turns 25 in early October. By contrast, the projected first round tackles in this year’s NFL Draft are currently 20 years old.

There’s also no real precedent in recent history for a first round offensive tackle to sit on the bench for two entire seasons...

If Peters is re-signed, Dillard will join Sherrod and Andre Smith as the most recent first round tackles who didn’t serve as a full-time starter in at least one of their first two seasons. The very notable difference is that injury wouldn’t be the factor preventing Dillard from playing.  [bleedinggreennation.com]

Put in a good word

One of the better stories to come out of the combine interviews — aside from Laviska Shenault's Kobe Bryant story and DeAndre Swift's cheesesteak take — was Penn State receiver K.J. Hamler discussing the possibility of playing with the Eagles and former Nittany Lions teammate Miles Sanders next season.

He was scheduled to interview with the Eagles on Wednesday, but unfortunately a hamstring injury will prevent him from working out in Indianapolis.

Now, another dangerous offensive playmaker who plied his trade with the Nittany Lions could be on the radar for the Eagles. And he wouldn’t mind reuniting with his former teammate in Philadelphia.

Hamler entered the week with plenty of intrigue. The speedy wideout averaged 16.9 yards per catch and caught 13 touchdown passes during his career at Penn State, and he was expected to be among the fastest players in the 40-yard dash. But Hamler told reporters Tuesday that he tweaked his hamstring during training and would not participate in on-field drills.  [pennlive.com]

Following his media session at the NFL Combine, Roseman was a guest on SportsRadio 94 WIP with Angelo Cataldi and the Morning Team. The Eagles GM was asked about his reaction to Jadeveon Clowney's hit that knocked Carson Wentz out of the team's wild-card loss to the Seahawks. And while he was careful to avoid openly criticizing the NFL for not punishing Clowney, Roseman said the hit left him "sick," which is probably the same way every Eagles fan felt during that game.

"Angelo I saw that one episode of All Or Nothing and I think it's clear that I watch the games very similar to our fan base, because I can't control anything," Eagles executive vice president and general manager Howie Roseman said on Wednesday's 94WIP Morning Show. "I'm up there and I turn into the most passionate Eagles fan there possibly can be. I don't want to compete, there's a lot of them. I'm in that group.