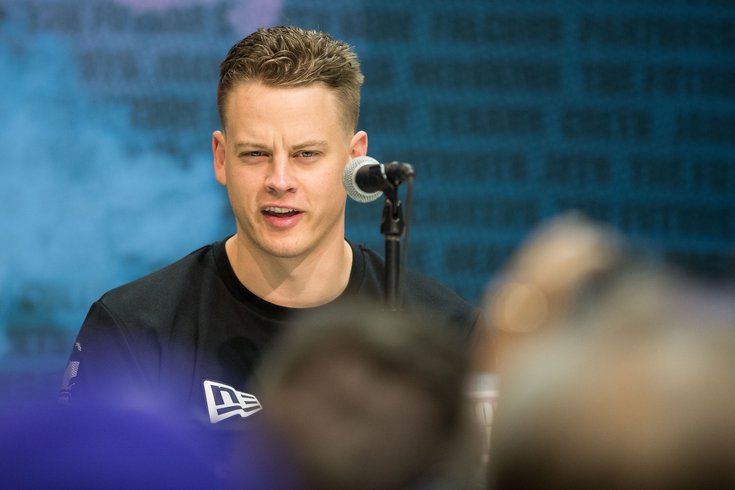 Louisiana State quarterback Joe Burrow speaks to the media during the 2020 NFL Combine.

ATLANTIC CITY, N.J. — Joe Burrow made history this past season by becoming the first player from LSU to win the prestigious Maxwell Club College Player of the Year Award.

This weekend, Burrow will continue to make history by being the first player in the 83-year history of the award not to show up for the annual Maxwell Club gala, which takes place this Friday night at the Tropicana Hotel Resort and Casino in Atlantic City.

Burrow, the 6-foot-4, 216-pound quarterback who led the Tigers to their first national championship since 2007, was LSU’s first Heisman Trophy winner since Billy Cannon won it in 1958.

He torched the NCAA, SEC and LSU record books in becoming the most decorated player in LSU football history, guiding the Tigers to a 15-0 record.

Burrow, who is expected to be the first pick in April’s NFL Draft, threw for 5,671 yards and 60 touchdowns against 6 interceptions.

Burrows’ representatives told the Maxwell Club on Tuesday that Burrow would not attend.

Two very significant past Maxwell winners even made attempts to reach Burrow about attending to no avail.

Numerous attempts by the Maxwell Football Club, according to a club spokesperson, were made over the past month to contact Burrow. This included LSU, his representation and his parents. Three weeks ago, in a conversation with his parents, a Maxwell spokesperson said that Burrow would attend.

That changed this week. Over the last few days, the club has tried to reach Burrow’s representatives to confirm Burrow would be showing up in Atlantic City this Friday for the annual awards gala and received no reply.

“I’m frustrated for our partners, for our host at the event and our associated partners with what we do at the Maxwell Football Club – they’re excited to see Joe Burrow. And rightfully so.

“Those things happen from time to time. I haven’t run across this type of decision making for a winner not to come and I really don’t know a viable explanation other than what we’ve been told.”

A phone request and email request for comment to the William Morris Agency, which represents Burrow, went unanswered.