The Sixers have an Al Horford problem 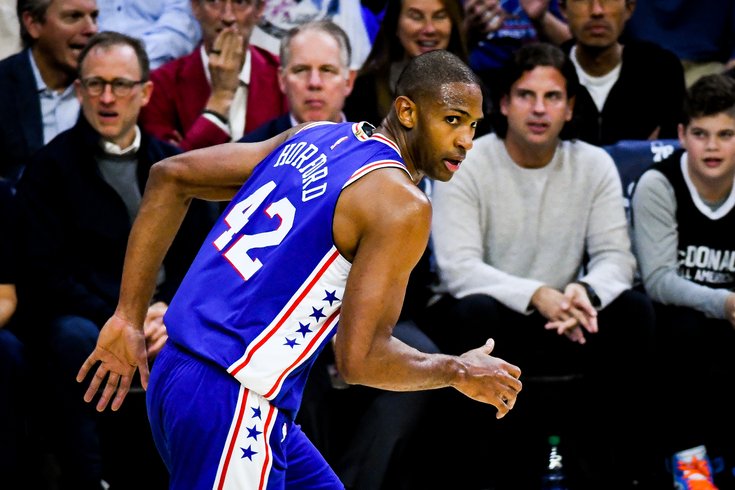 Philadelphia 76ers forward Al Horford during a game against the Boston Celtics.

It is hard to shake the feeling of dread watching Al Horford play basketball for the Sixers right now. Even if you were optimistic about his ability to fit alongside Joel Embiid and Ben Simmons in an oversized starting lineup, you have to wonder if Horford is in the process of joining a storied history of free-agent failures in Philadelphia sports.

When the fully healthy Sixers have been on the floor together, rare as the occasion has been, there was cover for Horford not looking like himself. Fingers have been pointed at the poor fit in the frontcourt, the system used by the head coach, and the dropping coverage on defense that allegedly didn't play to his strengths. All the while, Horford played the good soldier in public, offering the same professional musings he had throughout a productive and impactful career.

And while all of those factors may play a role in Horford's struggles to date, the excuses have been laid to rest in this stretch of time without Philadelphia's two best players. Freed from the poor fit with Embiid, thrust into the role he should allegedly thrive in, Horford has simply not been good enough.

It is how he has not been good enough that is shocking. Horford's decline on offense has been nothing short of a disaster this season: at every single measured distance, he has declined in effectiveness compared to last season, which all adds up to a 10.3 field-goal percentage drop:

The three-point number is the most significant, as that's where Horford's shot distribution has grown the most, but the declines elsewhere have been almost, if not more shocking. That mark from between 16 feet and the three-point line is the worst for Horford since the 2011-12 season, and his effectiveness from 3-10 feet would go down as his worst ever year from that area of the floor. It's simultaneously confusing and sensible — he no longer seems able to leverage his strength as well when he gets his low-post opportunities, and that compromises the quality (and thus, success rate) on his shots.

Defensively, Horford's drop-off is an even bigger story, as that is the area of the floor where he was expected to make his money. Sources with knowledge of the front office's thinking attributed the signing at least in part to the job the Sixers would have to do in the playoffs against Giannis Antetokounmpo, who is in the midst of what looks like another surefire MVP campaign. On Christmas Day, Horford looked capable of living up to that expectation, combining with Joel Embiid to stifle the Greek Freak and earn a statement win over Milwaukee.

The evidence suggests that performance is an outlier, rather than the proof of concept Sixers fans and staff hoped it was at the time. The Bucks have made quick work of the Sixers in their other meetings this season, and when Horford has been asked to help stop athletic bigs this season, the smarts and strength he has used to great effect over the years have not been enough to save him.

In Tuesday night's road loss against the Lakers and in Sunday's loss to the Clippers, Horford went against two bigs of different sorts and different skill levels in Anthony Davis and Montrezl Harrell. Functionally, there was no difference. Both men wildly outplayed Horford, who looks unable or unwilling to move at times.

Playing defense in the NBA comes with an acceptance that your best efforts may end up going unrewarded. Getting beat by good shotmaking is one thing, as is losing the occasional one-on-one battle to a guy like Davis, who has been one of the top-five players in the league this season.

These are not what I would consider "best efforts":

These are not the only examples of Horford's woeful start to the road trip, and if these plays were made by Jahlil Okafor during the year the Sixers went 10-72, they would have been presented as proof of Philadelphia's toxic losing culture and evidence that they were doomed to fail. These aren't failures in the scheme, this isn't Horford being hung out to dry by a third party, it's a veteran center who has historically made his money on defense getting his chain snatched.

As these plays mount this season, with the Sixers not coming close to meeting lofty preseason expectations, it doesn't seem like many people have grappled with the idea that perhaps this is just who Horford is now, a formerly productive player who has lost his fastball. There are two things stopping people from piling on Horford, as far as I can tell — trusting his track record over current form and believing there is perhaps a health issue no one is talking about. It would be unwise to completely dismiss either of those ideas. Horford has had midseason down stretches in the past and has always found a way to turn it back on when the playoffs get started, not to mention that he has looked much better even during this season.

But that's part of why I find it hard to buy that there has been an ominous health issue weighing him down. Horford missed a pair of games in mid-December with what the team called left knee soreness and hamstring tightness, and when he returned to play against the Brooklyn Nets on December 15, many assumed those issues were to blame for him looking glued to the floor in that meeting. We all seemed to bury the idea his struggles could be health-related during that Bucks blowout on Christmas, only for it to resurface whenever he has a bad shooting night or performance against the elite players he is supposed to help stop.

Health is not linear, and Horford's knee flare-ups could be bad enough to impact some of his issues with form. But if consistency is the mark of great players, age is their biggest enemy. We see Horford flash moments of athleticism from time-to-time, and his passing talent has bubbled to the surface with more opportunities to showcase it. But he, like many other players entering the back stretches of their careers, can only summon so many moments of explosion and bursts of energy on a nightly basis.

When that is the case for a transcendent talent, you can get away with and live with taking plays off. When that is the case for a 15-minute per night role player, you can avoid most of the downside. Horford is neither — he is a very good, sub-elite player for most of his career who is expected to play a significant role as he declines, both because of his $100+ million contract and the past production that inspired you to give him that deal in the first place.

If there is a gear he is allegedly saving, when exactly is he saving it for? The Sixers (37-25) are down three starters and sliding back down the Eastern Conference playoff standings without the services of their two best players. There has not been a better time for Horford to assert himself as a player and a leader, whether that means dialing up the defensive intensity or seizing more responsibility on offense. The offense has been simplified with this group, and Horford has been put into more actions where he feels comfortable and familiar, yet nothing has changed.

Time will tell us whether this is a blip or the new normal. With dreams of pairing him with Embiid up in smoke, they can ill-afford for his play as a lone big to fall off a cliff too.