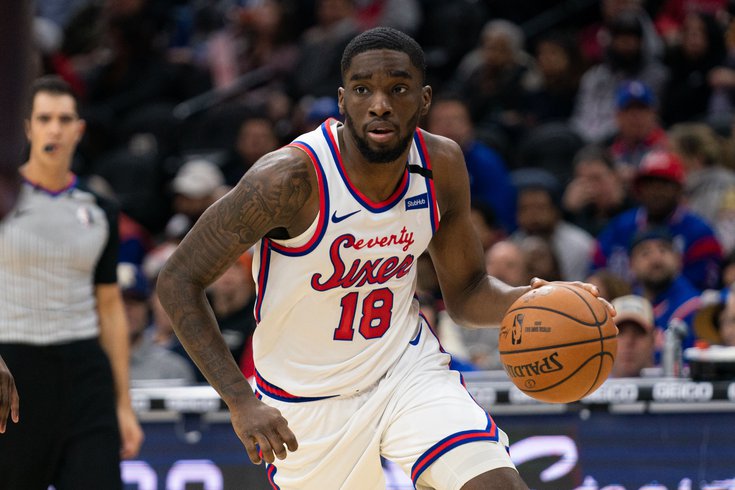 The hardest time to discuss a young player's success is as they're in the middle of having it. To state the obvious, it is fairly unlikely that Shake Milton is going to shoot 71 percent from three for his career, as he has since the All-Star break ended, and it's far from a lock that he will be a rotation player long-term, let alone a guy who can start and star against contenders like the L.A. Clippers.

It wasn't even clear to the Sixers, or Milton himself, that he was going to stick around in this rotation. As head coach Brett Brown told reporters in L.A. (per Ben Golliver of the Washington Post), his post-break plan for Milton was, well, to stick on the bench until his moment had arrived.

"You sit down and you speak to every single player and discuss very clearly, this is your role. My discussion with Shake is, you're not playing, you're not in the rotation. I'm going with Alec [Burks], I'm going with [Josh Richardson] and Ben Simmons, and you have to stay ready, this is your role," Brown said on Sunday in L.A. "For him to hear that and then you learn, life changes, things happen, and are you ready? And he clearly is."

The question moving forward is what role Milton is actually ready for, and what we may have learned about him since last summer's spectacular disappointment in Las Vegas. Are we trapped in the moment, has Milton arrived, or are we somewhere in between?

Beyond the top tier of professional athletes, all of these guys live by a two-word code: stay ready. You never know when your chance is going to come, who it'll come alongside, and the type of competition you'll face when you get it.

But it was even more difficult for Milton to figure all that out when you consider that his role has never really been nailed down in Philadelphia. A college point guard, Milton was viewed as a potential off-ball guy by most draft experts, with playmaking and his ability to separate the biggest question marks coming in. Shooting chops and ball skills were expected to help him make it work as a two, but for that to work, you are under pressure to fill it up, and Milton struggled to find his footing as a shooter/scorer at the pro level early in his career.

Milton's touch was poor in limited NBA minutes during his rookie year, and though he shined as a lead guy in the G-League, he had a miserable (albeit brief) run as a point guard in Vegas last summer after signing his four-year contract with Philly. The Sixers were banking on him lifting up a group that lacked creation on the wings, and in what should have been a dominant run for him, Milton looked over his head.

Even heading into that stint, the Sixers were non-committal on the role they envisioned for Milton, with their focus primarily on growing his game in any way possible.

Positional designation matters less than ever, but skill thresholds matter. Can you use your handle to separate enough? Are you creating enough for teammates? Is your shooting touch there? Those things determine how you can be used. And by the time they'd reached the preseason, the Sixers had shifted Milton into more of an off-ball role, where he played better and earned a spot in the rotation to start the year.

Without advanced ballhandling or the speed to set him apart, Milton looked overmatched as a self-creator as recently as the beginning of this season, struggling to beat even poor defenders off of the dribble. There's a noticeable difference between being a capable dribbler and a crafty one — attacking a closeout is not the same as having the tricks in the bag to break guys down.

We can all forgive Milton for losing his footing on the above play, but it's a slow, mechanical spin move doomed to fail in the first place. And plays like these are part of why Milton ended up competing for minutes with someone like Furkan Korkmaz rather than Raul Neto early in the year, and Korkmaz's breakout campaign (plus an early injury) helped to bury him.

How shooting changed the world for Shake

The work continued for Milton, spotlight on him or not. That took many forms: the odd appearance for the Blue Coats, pickup games with the "low minute group" in Philadelphia, and work with staffers like player development coach Tyler Lashbrook, who is assigned to Milton (among others).

Milton hasn't gotten any quicker, nor has he turned into Kyrie Irving with the ball in his hands. But his shooting splits are absolutely outrageous since the calendar turned to 2020. Milton is shooting 54.5 percent from three since the start of January on over four attempts per game, including a ridiculous 60 percent on pull-up threes.

Those numbers obviously won't hold, but as we have seen with Furkan Korkmaz, sustained runs of form change how teams defend you. Milton had 27 points and five made threes in a losing effort against Atlanta in late January, and if you compare how the Hawks defended him in an earlier loss compared to that game, there is a night and day difference.

In the first meeting, the Hawks preferred to go under the screen and simply wall off the paint on Milton. But with Milton rolling from deep in the latter meeting, DeAndre Hunter had to start selling out to get over screens, which made it easier for Milton to turn the corner and get downhill.

That's when you can see the craft in his game shining through. He has good touch around the rim, with good footwork and body control that can keep bigs (or even tailing perimeter players) off-balance — and on top of that, he's pretty good at finishing lefty for a right-handed shooter.

Another big positive is that he always seems to play at his speed, not anyone else's. In Sunday's breakout game, Montrezl Harrell nearly jumped out of his shoes when Milton attacked a blown Clippers switch, and the second-year guard calmly used the rim as a shield to pick up two of his 39 points on the day.

The hot streak isn't going to last forever for Milton. But putting that stretch on tape, and putting together a performance like the one he had on national television on Sunday, is enough to influence what an opponent's scouting report looks like. NBA people don't tend to care how good of a player or shooter you were in college, they need results to back up the promise. Those are finally here for Milton.

So what does this all mean for Milton now?

Even if there is an extreme drop in form for Milton as a pull-up shooter, and there will be unless he is suddenly the greatest pull-up shooter of all-time, he can absorb that and still be a useful player for Philadelphia. He has proven he has some scoring chops at this point, with sustained success in the G-League and flashes in the NBA. The decisive factor will be how he weaponizes the extra attention as a means to create shots for others.

Milton is not an especially advanced playmaker, with most of his assists coming off of simple swing passes or kick-outs. With his height and length, it's slightly disappointing he doesn't hit shooters over the top more often than he does, though some of that is a product of not being able to suck in enough attention with his drives in the first place.

The exception to that claim is on lobbed entry passes, where he has shown a knack next to teammates of all sorts. It was one of the areas where he looked good in Summer League, and in limited reps with Simmons or Embiid, Milton has shown good timing and touch.

Not being a high-level playmaker would hurt him more elsewhere. But Simmons needs players around him who are capable of taking only some responsibility off of him as a lead ballhandler, while also being able to cash in on the looks he creates with his penetration. Milton fits the bill nicely and has flashed plus instincts as an off-ball cutter in addition to his shooting.

The question, then, is more about his defense than it is a positional label. Milton struggles to track guys through switches and ends up botching rotations far more often than he should, and those mistakes lead to high-value shots for opponents. On-ball, he can be okay on a possession-to-possession basis, but opponents can use strength to go through him more often than not, which negates any advantages his length should provide him.

Those weaknesses are hard to account for with personnel or scheme since the issue is not really about avoiding specific matchups. His weaknesses are youthful traits and his buy-in suggests he should improve there, but unlike a lot of other young defenders, Milton isn't blowing assignments because he's hunting steals and playing a risky brand of basketball. Focus isn't always there moment-to-moment, and getting to neutral on that end would be a big step up from where he is today.

While that may cap his ceiling as a playoff guy this season, Milton has proven to be everything they've needed from a depth guard over the last two months. They will find a way to get stops with the group they have, but manufacturing points has been a problem from the very start this season. So long as that is the case, Milton figures to have a home in Philly.