Sixers' Joel Embiid has left shoulder sprain, to be re-evaluated in one week 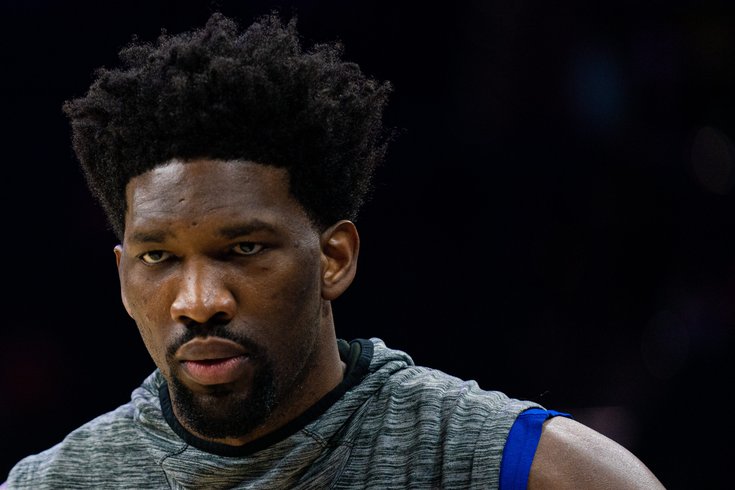 After Thursday's win over the New York Knicks, the Sixers announced that Joel Embiid had completed injury evaluation and learned there was no significant structural damage in his left shoulder.

Embiid's progress/return to play will be symptom-based, the team said, and he will be reevaluated in one week, putting his availability in jeopardy for most, if not all of the team's upcoming West Coast road trip, which includes games against the Clippers, Lakers, Kings, and Warriors.

PhillyVoice asked the Sixers for a more specific diagnosis of Embiid's shoulder issue, e.g. a grade of the sprain, and the Sixers declined to offer more than, "left shoulder sprain" at this time.

Embiid collided with Cavs big man Ante Zizic late in the first quarter of Wednesday's game in Cleveland, showing immediate discomfort in the left shoulder and upper pectoral area. The Sixers took a foul to get him off of the floor and back to the locker room on the ensuing possession, and after briefly emerging in visible pain, Embiid was whisked back to the locker room and ruled out for the rest of Philadelphia's road loss.

When asked whether or not Embiid received X-rays in Cleveland during Wednesday's game, Sixers spokesman Dave Sholler responded as follows:

"The initial testing he had at the arena yesterday did not show a fracture if that's what you're getting at," Sholler told reporters. "But as we go through the evaluation process, we will learn more."

Embiid told Keith Pompey of the Philadelphia Inquirer that he would be undergoing an MRI upon returning to Philadelphia on Thursday.

Without Embiid, suffice it to say the Sixers are left in a pretty dire situation. Their three best remaining players combined for 30 total points on the road against a bad Cleveland team on Wednesday night, and the other side of the ball wasn't a much more encouraging story. This will presumably allow Al Horford and Tobias Harris to play their optimal positions of center and power forward respectively, though that has not been enough to get proper value out of either player so far.

One might assume this would prompt a little reimagination of the offense for Philadelphia, even if it's temporary, to try to get Harris and Horford going in pick-and-rolls. Without Embiid and Ben Simmons trying to get touches in the paint, the Sixers can presumably play a spread style. I would caution against expecting wholesale changes as a result, but it is certainly in their best interest to try to jumpstart a struggling team by trying something different.