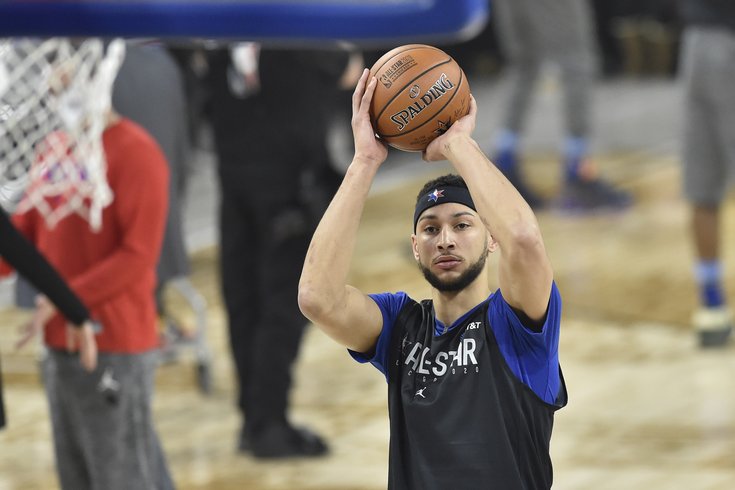 Ben Simmons and the rest of the Sixers are back in the gym together for the first time since their season ended this past summer.

Ben Simmons has a nerve impingement in his lower back and will be re-evaluated in two weeks, a team source confirmed to PhillyVoice on Tuesday afternoon. Shams Charania of The Athletic was the first to report the news.

After exiting Saturday's game against the Milwaukee Bucks, the Sixers say Simmons underwent imaging and evaluations that confirmed he suffered nerve impingement in his lower back.

That two-week guideline should not be taken as any sort of return-to-play timeline. Simmons will begin undergoing daily treatment and rehab over the next two weeks, but when asked if the Sixers had any expectation Simmons might be ready to return to play following the two-week timeframe, a team source replied that he will only be "re-evaluated in two weeks."

This will serve as a starting point for us to track Simmons' progress, but it does not actually tell us very much about the underlying cause of the issue, nor the severity of the situation facing Simmons and the Sixers moving forward. A nerve impingement explains to the public that his back is in pain, but not necessarily the cause, which could range from more severe issues (a herniated disc) to painful but nonconsequential issues (like falling on it a bit too hard).

On that front, when asked by PhillyVoice whether the impingement was the product of one of those larger, more severe issues, the Sixers said they had no further information to offer on the injury at this time.

A team source said to PhillyVoice that Simmons suffered the injury at the 8:25 mark of the first quarter on a layup attempt on Saturday. That claim, however, is preceded by Simmons missing the previous game against Brooklyn with lower back tightness, an issue Sixers head coach Brett Brown claimed popped up when they took the floor for practice on Wednesday, February 19th, and the coach initially dismissed the severity of the issue when addressing reporters prior to the Nets game.

"It was a long, hard practice and the guys came back great," Brown said last Thursday. "It was a play where he went up for a rebound and I looked over and he left the court, went and got treatment...we don't believe it's anything too significant."

Before Monday night's game against the Atlanta Hawks, following Simmons' removal from the Bucks game on Saturday, Brown's tone had changed.

"I don't know. It's really like, how long is a piece of string?" Brown said of the timeline to return for Simmons. "Who knows?"