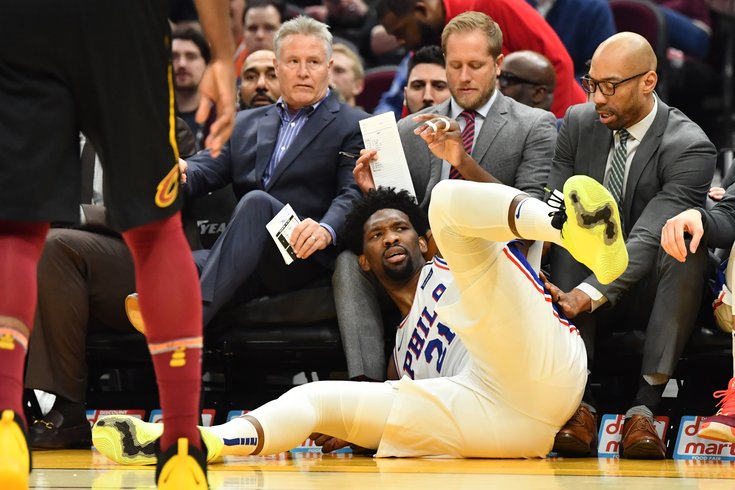 The Sixers lost Joel Embiid to a shoulder injury against the Cavaliers and then eventually lost the game, 108-94. It's another horrific road loss in a season filled with them, though most people will obviously care more about the big fella than the spectacular failure of the guys left on the court.

Here's what I saw on Wednesday evening.

• He has been relegated to towel-waving duty for most of the last couple of months, with Norvel Pelle emerging as the preferred third big, but Kyle O'Quinn was back in the rotation for emergency purposes on Wednesday night and did well for himself.

It started with one very simple fact — O'Quinn played as hard or harder than anyone on the floor, and his passing ability helped open things up for an offense that was otherwise stagnant. On his very first play on Wednesday night, O'Quinn played excellent defense at the rim, came up with a tightly-contested rebound, and everything just sort of flowed from there. With the game in danger of slipping out of reach in the second half, it was the veteran center who set the tone on the defensive end, propping up the guys who tried to shoot them back into it.

I'm not going to sit here and advocate for more O'Quinn, but the Sixers might have any other choice, depending on how things go with Embiid (who we'll get to below). And if you want my honest opinion, on merit he deserved the crunch-time minutes on Wednesday.

I was bullish on Milton's chances to stick in the rotation early in the year, and while I'm still skeptical he will be able to defend at a playoff-caliber level, he is a good fit in the fully-healthy version of this team. He doesn't have quite enough in the bag to be a full-time one despite playing point guard as an amateur, but he can handle enough to attack closeouts and run the odd pick-and-roll, which is a nice thing to have on top of his shooting touch.

His development may be one of the only enjoyable things to track down the stretch.

• Alec Burks shot and scored a decent amount, but I am still not totally convinced that was a "good" night. I'll be charitable to him since he at least looks like he knows what he is doing half of the time.

• There is absolutely no excuse to lose to this Cleveland Cavaliers team, with or without Ben Simmons, with or without Embiid. Even before Embiid retreated to the locker room, the Sixers were looking like their usual lackadaisical selves on the road, and it certainly didn't get any better once he was done for the night. You know who we're going to focus our attention on.

There was no excuse for Al Horford to find himself out of rhythm on this night. He got his second straight start, he was force-fed the ball early (five shot attempts in the first five minutes alone), and once Embiid hit the locker room, he was able to play all of his minutes as a lone center with all the perks that come along with that.

Yet there Horford was, missing wide-open layup attempts in transition, looking stuck to the floor on defense, and failing to step up in a moment where the Sixers needed him more than ever. This isn't a standard backup center who is or should be limited by the personnel around him, it's the guy you paid a truckload of money to for situations just like these. And while Horford has had the odd good game with Embiid out, more often he has looked like he is drowning, unable to lift the team up the way you'd expect.

Ditto for Tobias Harris, who has had a less obviously bad season but whose limitations really become clear when he is asked to do more in the absence of Embiid and Simmons. With little-to-no pressure from Cleveland's perimeter defenders — and those guys aren't exactly world beaters, Harris still couldn't find a way to get going. He had some pretty embarrassing gaffes, including a play where he dribbled the ball off of his own foot, springing the Cavs for a fast break the other way.

The ability to go to an extra level has never really proven itself to be there for Harris, who volume scores consistently but very rarely proves capable of shouldering the load when he needs to. If he were getting paid Richardson money, that's something you could probably live with. But this is the guy who was allegedly going to fight for the closer role, take a larger share of the offense, and break out during his first full season in Philly. It hasn't happened.

They need these two now more than ever. The early returns aren't promising.

• It is fair to point out that other coaches have managed to get much more out of the above two players than Brett Brown has this season. I think Horford is a little tougher to blame Brown for, since the initial starting lineup fit was a disaster, but Harris has plenty in his toolkit that he's not really able to feature within the confines of Philadelphia's offense.

Do I think Harris is a good enough player to build the offense around him in pick-and-rolls? Certainly not. But he succeeded at a high level when put into those sets by Doc Rivers in L.A., and the Sixers can kill two birds with one stone by putting Harris and Horford in those looks if they're without Simmons and Embiid for any period of time. They'll have more shooters (or at least spacers, let's not overvalue their abilities) around them at all times, and there's no reason not to lean into what they do best.

We can have the same discussion we've been having all year about how the personnel doesn't make sense, of course, but the offense lacks a certain zip that all good NBA teams have on that end. Horford has always been a guy who looks like he is playing instinctually, and now it's as though you can see each individual gear turn in his head before he makes a play. It seems hard to believe that a guy revered for his basketball intelligence suddenly looks like he's trying to do math problems in his head to make the right pass.

(To play devil's advocate, O'Quinn doesn't seem to have that same level of hesitation, and he's not supposed to be anywhere near as good as Horford, so figure that one out.)

The Sixers need Brown to step up every bit as much as they need Horford and Harris to if Embiid and Simmons are both out for any games. Maybe he has been dealt a weird and/or bad hand, but he's not making the best of it even with that caveat. It's time to break from the norm and do what it takes to keep this season from going totally off the rails.

• I'll say this about Richardson — the guy always competes hard, and he was one of the few guys who seemed like he was interested in trying to seize a game they needed in tough circumstances. Unfortunately, all of the same limitations we have discussed all year were even more glaring with Richardson in a featured role, and the Sixers never got over the hump as a result.

I don't know how many times I can say it, but he is not a point guard and can't be used as such for any extended period of time. He doesn't have the pull-up shooting ability, finishing ability, handle, or craft to consistently make teams pay when you run the offense through him, and despite the ball being in his hands a lot, he has stopped getting to the free-throw line, which has made an already terrible offense look worse.

On a team with a normal distribution of guard talent, perhaps these issues wouldn't be as pronounced. Unfortunately, the Sixers are built for the 1971 NBA finals, not the 2020 edition.

• Let me reiterate something — it is absolutely unacceptable to lose this game, even without their two best starters. I don't care if it's on the road, I don't care how jarring it is to lose Embiid, I don't care that you probably could have predicted this one in advance. This team has to come up with ways to get wins, and not only could they not do that, but they also didn't even really come close. Cleveland, a team that has no business beating anyone in convincing fashion, outpaced the Sixers fairly easily. Enough is enough with this garbage.

• Every year in the NBA, there's a team that comes in with big expectations and has every possible thing go wrong. Last year, it was the Boston Celtics, who had all the talent they could have asked for and collapsed in part due to a toxic locker room. The Sixers may not have the internal turmoil those Celtics did, but they appear to be the cursed team of the season.

After learning Simmons was going to have to sit for at least a couple of weeks with a back issue, everyone was gearing up for what looked like a dominant Embiid run. Between a couple of big nights following the All-Star break and the need to step up without Simmons, all signs were pointing to us getting to watch the Embiid of the past. At least that was the case, right up until he collided with Ante Zizic late in the first quarter of Wednesday's game.

Are you kidding me? Damn.
Philly keeps gettin hit with injuries

It was clear almost immediately that something was wrong with Embiid. Standing at the free-throw line, he kept rotating his shoulder and grabbing at his upper pectoral area, and after missing both free throws, the Sixers took a foul to get him off of the floor and back to the locker room. He would emerge early in the second to sit on the bench, but after doing nothing but looking like he was in pain, the Sixers yanked him to the back and he was not seen again for the rest of the night.

There is no word yet on how serious the issue is or even what it is, but needless to say they are in big, big trouble if this guy misses time. We'll have more whenever information is available.