But prior to Thursday night's game against the Knicks, Brett Brown told reporters 'that is not true' 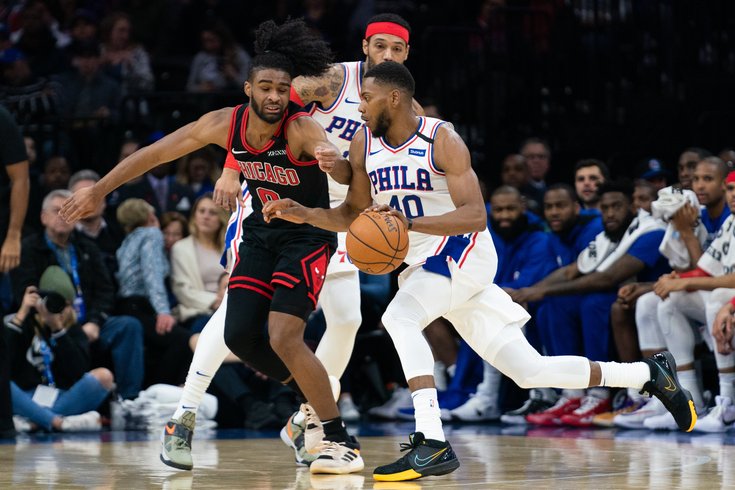 The Sixers are in one of the worst positions you can be in as an NBA team. Their best players are hurt, their long-term pieces are ineffective, and their midseason acquisitions are on expiring contracts, jostling for as many touches and opportunities as they can get. And in the case of forward Glenn Robinson III, it appears to be that he is fighting for those reps on a team that didn't prepare him for the role they wanted him to play.

That's what Robinson III told Spencer Davies of Basketball Insiders on Thursday, and the veteran wing claims he arrived on the scene without an understanding of what he was supposed to do for Philly:

“Even when (Golden State) played Philly, I showed them what I could do,” Robinson told Basketball Insiders. “So to play those consistent minutes a night and perform well… that’s the most disappointing part about coming here is that — both of us (are) coming off career years where we’re looking at hopefully big numbers after the season. I know I’ve got a family to feed. So you think about all those things."

“All those things play a role, and then when you come here and your role’s not really explained or you don’t know what’s going on with the trade — it’s not like it was a trade where you come in and immediately have an impact. It’s a little different, so… this team is full of wings, full of guys who can play. So really, I don’t really understand it. But it’s a business, you’ve got to make it happen and go out and try to do your best every night.”

There is an obvious level of posturing going on here. Robinson III is coming from a situation where he was playing 30+ minutes a night, checking the best perimeter player on the opponent night after night, and shooting a career-best mark from three, with plenty of momentum building toward a nice payday this summer. To say he doesn't understand why a playoff team would want another ostensibly good player is a bit silly.

Getting increased visibility on a playoff team* would be a good thing for him, but the opportunities were never going to be the same. The trick for Robinson III was always going to be translating that production and proving he could do it on a team with expectations, rather than on a lottery-bound team with a need for anyone to step in and take opportunities. As of this writing, he has made exactly zero of his three-point attempts in a Sixers uniform, which is also hilarious in its predictability.

About six seconds before I came out here, we spoke, and I did see that quote. I do what I do all the time, I go to my media manager right here, and I say you tell me what's going on and [Sixers VP of Communications Patrick Rees] tells me.

That is not true. With all of our players, you sit down and go through, after All-Star break, every single one of them got a road map, this is your role, this is what we expect, one. Two, I get when you have a career year on a poor team, and it's a contract year, I understand it, I coached those years myself. In the middle of all of it, he's good people, he's a good person, and he's trying to figure out what his next step is while coexisting in a team framework.

I've coached him before. I think he has an important role to play here, we hope to see more of it. But as I said to him, and I'll say it again, this is a show-me league, and here it is, this is what we expect and hope to see. From time to time, we have seen that, I think he is a league keeper.

But before anyone goes pinning this on "Greedy Contract Year Player X" — and Robinson would go on to say he believes in the Sixers' talent — consider the day-to-day life of Robinson III since arriving here. He has been pulled in and out of the starting lineup, sometimes within the same game (as was the case against the Clippers), and the team construct has been total chaos since he has arrived. Ben Simmons was healthy, and then he wasn't. Horford was the sixth man, and then he wasn't. They were building the offense around Joel Embiid, and then they couldn't.

That does not make for an easy adjustment period, and with the bigger parts being moved around at such a rapid pace over the last few weeks, it doesn't seem farfetched to believe Robinson III could have been lost in the shuffle a little bit. If true, that's an indictment of the process that brought him here, and certainly on the current regime for not laying out a clear plan for him once they had him in the fold.

The truth is probably somewhere in the middle here. Given the struggles the Sixers have had integrating other key pieces this season, it would be silly to dump all fault at the feet of Robinson III, who has played hard and looked decent enough in small stretches here. Helping him understand what it is that he does here doesn't seem like a huge ask. But as Shake Milton has proven recently, if you can simply knock down the easy looks you're going to get from the perimeter, your role is not really going to be up for debate.

Local frustration is at an all-time high over the jobs Brett Brown and Elton Brand have done, and comments like these aren't likely to help ease any of those concerns, I can tell you that.