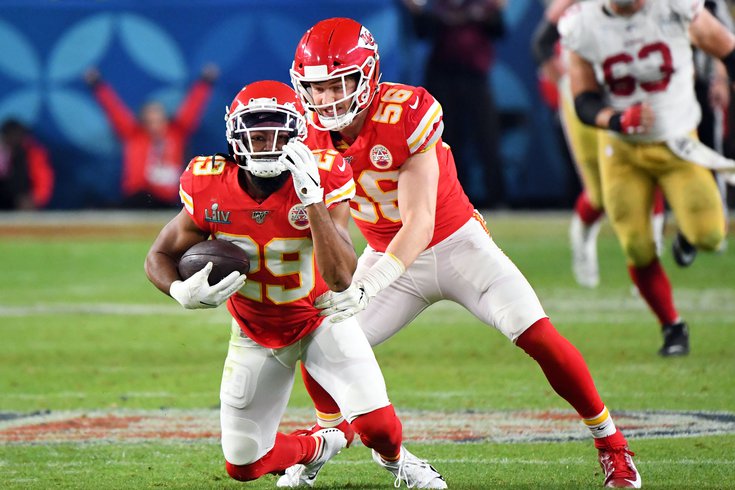 After reviewing the Dallas Cowboys' and New York Giants' free agency hauls the last two days, today we'll turn our attention to the Washington team. Here's what they have done so far.

If Washington can't work out a long-term deal with Scherff, then he will play on the tag this season at over $15 million, which will make him the most expensive guard in the league.

Still, Washington's OL needs a lot of work, and they absolutely could not afford to lose Scherff.

Bostic started all 16 games for Washington last year. His contract should tell you what teams around the league think of him as a starter.

Orchard is a former second-round pick who has bounced around the league a bit. He had 14 tackles and a sack last year.

Backup defensvie lineman, spent almost all of 2019 on IR.

Fuller was included in the trade that brought Alex Smith to Washington. Two seasons and a Super Bowl-sealing INT later, he's back. Fuller is a versatile defensive back who is best suited for the slot, but can also play outside corner or safety. His two-year tenure (learning a new scheme each year) in KC received mixed reviews, but he was excellent in the Super Bowl when it mattered most. He's smart, he gets hands on footballs, and he is the kind of good, young player any team should be looking to build with, because of how much he can do.

Davis has good size and athleticism, and for $4 million on a one-year deal, I like him a lot more than some of the other safeties on the open market who got more lucrative deals. He'll play more of the free safety role alongside Landon Collins.

Davis played under Ron Rivera for eight years in Carolina, and he just turned 37 years old. Every time a a team hires a new head coach, it feels like that coach has to bring in one of "their guys." I guess that's Davis here. For a team going nowhere in 2020 that should be focused on bringing in young talent, I don't love when coaches do this, but whatever.

Allen won his first four starts with Carolina last year, mostly with smoke and mirrors, before losing 7 of his next 8 starts. This is another "Rivera guy," but at least he's still only 24, he's got some experience, he'll cost next to nothing on the cap, and since he only has one accrued season he won't become an unrestricted free agent until 2023. That is a perfectly reasonable trade acquisition.

Schweitzer was a tackle in college who played both guard and center for the Falcons. He should compete for a starting job at LG, and also gives Washington an added option at center, should they need him there. With the absurd number of injuries that Washington has suffered over the last few seasons, it makes sense for them to prioritize finding depth along the line, with Schweitzer here, and a swing tackle in Cornelius Lucas.

If Lucas has to start at left tackle this season, that's not ideal, but he's an experienced swing tackle that Washington got for almost nothing. Compare this signing to the Lions' five-year, $50 million contract for Halapoulivaati Vaitai, and this looks like a steal.

Pierre-Louis is a six-year vet who played for his fourth NFL team last year (the Bears), and started competently down the stretch for them in three games. He has excellent athletic measurables, so at a minimum he'll be a good special teamer, and he'll provide good linebacker depth.

Latimer was a second-round disappointment for the Broncos, but at least became a useful special teams guy and No. 4 receiver for the Giants the last two years.

McKissic is listed as a wide receiver, but he was more of a running back in previous stops with the Seahawks and Lions. He averages 4.6 yards per carry on 88 career rushes, and he has 70 career receptions. He's sort of like a poor man's Chris Thompson.

Thomas is probably best known for starting at quarterback for Virginia Tech back in the day. As a tight end, he had his best year last year, catching 16 passes for 173 yards and a TD.

This dude started all 16 games for the Colts in 2017. I won't pretend that I know a thing about him otherwise.

Dunbar only had one year left on his contract, and he wanted an extension. Those talks stalled, and so Washington traded their best cornerback in 2019 to the Seahawks for a late fifth-round pick. While Dunbar did come with some injury concerns, that's pretty weak compensation for a 27-year old legitimate starting corner.

The once very promising Reed has suffered seven known concussions, and should have probably retired a few concussions ago. The team released him in February.

Davis is going form Washington tight end to the next Denzel Washington.

Dwayne Haskins wasn't super impressive as a rookie, and I have questions about him becoming a good starting quarterback in the NFL, but that's for another debate. With the situation being what it is (Haskins getting a chance to prove himself in 2020), the combo of Haskins-Allen makes more sense to me than Haskins and either Keenum or McCoy.

Jay Gruden starting Keenum last year made sense for a coach trying to save his job, but did not benefit the long-term interests of the team in any way. It's better for Washington that Keenum is gone, and I like Allen a lot better as a player worth developing than the aging McCoy.

When Washington signed Flowers last offseason, they were met with a lot of lol's, but Flowers actually played pretty well, and got wildly overpaid on a three-year, $30 million deal in Miami.

Fullback Michael Burton is a fullback.

And then there's Trent Williams...

The previous regime botched the Williams situation to an extreme degree when they were more content to just let Williams rot during the 2019 season instead of receiving a high pick for him in return.

Here's an update on Williams' relationship with the new regime, via John Keim of ESPN.

Williams held out last season, upset over what he said was inadequate medical treatment involving a cancerous growth on his scalp. Williams' side does not want a situation where he's forced to return in 2020, saying the relationship is not salvageable. They were tweaked that Redskins coach Ron Rivera met with free-agent tight end Greg Olsen before doing so with Williams. They have long felt the organization has treated Williams "like a possession." But the Redskins did not want to extend anyone's contract before Rivera got a chance to know them better and how they fit with what he wanted.

I'm certainly with Williams in the sense that many team-player relationships feel possessive at times, but being "tweaked" by Rivera for meeting with a player in Olsen that he has a long relationship with, before Williams, is crybaby stuff.

Williams' agent has also used national reporters to get his message out:

Washington has no plans to release Williams, per Keim.

The Redskins have discussed trade compensation for Williams with multiple teams. The Redskins, who have yet to be tempted, continue to ask for second-round value for Williams, though there is flexibility to achieve a deal.

Some teams appear to think Washington will cut Williams, and his side has pushed for it, but a source said that won't happen. Other teams have shown interest, but the cost of signing him and surrendering picks remains prohibitive.

Washington's new regime should have no reason to just outright release Williams. There isn't going to be football this spring, or possibly even the summer or (gasp) the fall. So what's the rush?

That said, holding out for a second-round pick is a pipe dream. They better lower that asking price, or they run the risk of watching his value fall, like it did last year under fake hardass Bruce Allen.

Washington's free agency looks a little bit like the Giants' free agency, in that both teams added a lot of players, a few of whom have past connections with the new head coach in town. I gave the Giants a C-, but I like what Washington did a little more.

They signed a pair of defensive back starters in Fuller and Davis, they added some offensive line depth, they (mostly) added younger, athletic players who should, at a minimum, improve their special teams, and they did it without shelling out a ton of money.

On the downside, what was the rush in trading Dunbar for less than he's worth? Yes, the Williams situation did not play out well when Washington held onto him too long, but his situation and Dunbar's are completely different. Williams' beef was largely with the medical staff. Dunbar's was financial.

Yeah yeah, the players have to prove themselves to Ron Rivera and buy in and want to win and all that rah rah nonsense. But at the end of the day, Washington parted with a good starting corner who will only count for $3,421,875 on Seattle's cap in 2020, and all they got in return was a late 5.