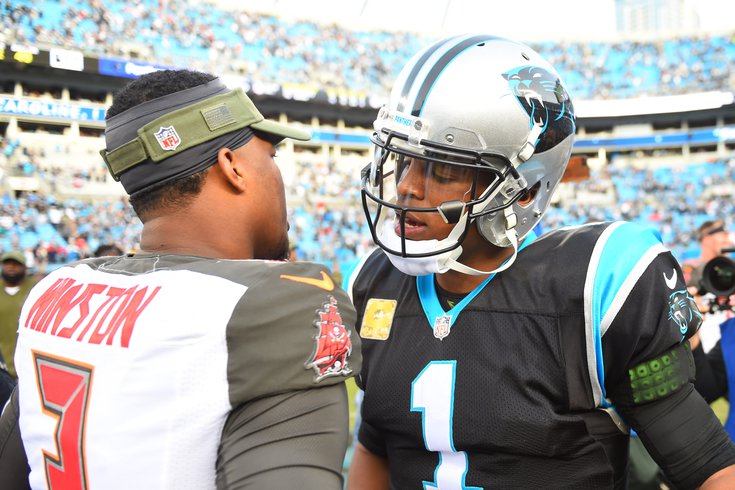 For a team that signed it's starting quarterback to a monster contract just a year ago — and has done everything since he's arrived to make it clear that Carson Wentz is the guy moving forward — the Eagles certainly have had a lot of intrigue around the position in recent years.

Naturally, the Eagles are looking to avoid that in 2020, right?

Enter Cam Newton, who was released by the Panthers earlier this offseason, and Jameis Winston, who was not re-signed by the Bucs. Both quarterbacks have spent their entire NFL careers with one team, but that's going to change next season — and with so many quarterbacks on the market and more set to become available in this month's draft — there's a chance both could be relegated to backup roles next season.

But, the Eagles as a potential landing spot for someone like Newton? Jason La Canfora of CBS Sports seems to think it makes sense...

The Eagles should be thinking in these terms, too. No way they can go into the season with Nate Sudfeld behind Carson Wentz. Not with Wentz's proclivity to miss games. Not with the stakes being this high for Philadelphia. Joe Flacco would make a helluva lot of sense, too, here. But if I can get Newton for, who knows, $7M a year? $10M? I'm doing it. Add in a voidable year or two to lower the cap hit. What am I missing here? Why wouldn't a good team jump all over this? I can recall, not that long ago, faux starters like Brock Osweiler getting $18M a year guaranteed for two years, and the Broncos and Texans in a bidding war for his services. And now no one would trade a seventh-round pick for Newton with one year and $19M left on his deal? I get there may be some medical concerns, but the trade would always be incumbent on him passing a physical, anyway. If pretend QB1s were going for $18M BEFORE the cap started exploding, what Super Bowl contender wouldn't try to get in on this now?  [cbssports.com]

And he's not the only person I've seen mention the Eagles as a possible landing spot, especially for Newton.

But would the Eagles really bring in a player that could leave Wentz looking over his shoulder all season?

Obviously, what happened in 2017 during the run up to their first Super Bowl title in franchise history doesn't need to be recounted here, but it's worth mentioning because the re-emergence of Nick Foles in that miraculous postseason didn't do any favors to the starting quarterback. Nor did it help people get over their belief that the grass is always greener on the other side, leading to a shorter leash than deserved for a quarterback who, when healthy, has been among the best in the NFL.

In fact, that dynamic is part of the reason the Eagles were so willing to let Foles walk in free agency after winning the Super Bowl. Sure, they were never going to match the contract he was given by Jacksonville, but even before that deal came down, it seemed like Foles' time in Philly was nearing an end as the team needed to remove Wentz from Foles' Lombardi trophy-sized shadow. Had he stayed, every time Wentz had a bad game, Foles would've been right there waiting, allowing for a quarterback controversy and outside noise to complicate life in the NovaCare locker room. Instead, they opted to roll with Nate Sudfeld as the backup, and ultimately added Josh McCown after Sudfeld got hurt.

Like Foles, McCown was a vet who could quickly learn the system and, as we saw, capably fill in for Wentz when needed. Unlike Foles, however, McCown was not going to be looked at as a potential savior every time Wentz threw a few bad passes.

This is not a slight on Wentz, but rather common practice around the NFL. Just look at who some of the other top starters have backing them up and you'll see what I'm talking about.

This offseason, the Eagles brought back Sudfeld, but with so many veteran quarterbacks with starting experience available, could the Eagles look to bring in a more well-known quarterback to back up Wentz and be ready to fill in should the injury bug bite again?

There's been the talk about Flacco being a possible fit, and given where he is at this stage of his career, that's about as well-known of a name as I could envision the Eagles bringing in — and even that may be a stretch. This is Carson Wentz' team, for better or worse, which was why I was so surprised to see La Canfora mention the Eagles as a potential landing spot for two of the more polarizing players available, both of whom could cause the very controversy the Eagles would be smart to avoid.