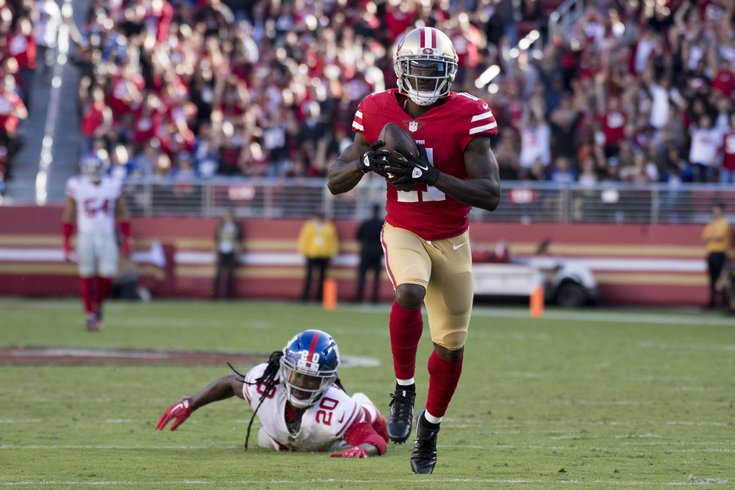 Goodwin is one of the fastest players in the NFL, or at least he was, so his skill set fits the Eagles' biggest need. He ran a 4.27 at the 2013 NFL Combine.

The cost to acquire him wasn't much. Basically the Eagles swapped sixth round picks with the Niners, moving back 19 spots, and then they were able to get him to agree to lower his salary from $3,950,000 to $1,350,000 (with the potential for incentives), per Mike Kaye of NJ.com.

So why so cheap? Injuries. Goodwin began each of the last two seasons as a starter, but did not finish as one, missing 12 games along the way.

To begin, Niners head coach Kyle Shanahan described knee and ankle injuries that Goodwin suffered as "chronic," when they placed him on IR in December of last season. So that's not good.

But even more alarming is Goodwin's history of head injuries. In the sixth game of the season in 2019, his last as a starter, Goodwin was knocked out of the game on the following hit, and he sat out of the Niners' next two games. (You'll see him taking a shot while running a crosser from the left side of the formation to the right, and then remaining face down on the field.)

Goodwin had previously suffered five concussions in a 17-month span in 2016 and 2017, as compiled by SportsInjuryPredictor.com:

The concussion that occurred in Week 17 in 2017 was a scary one.

After that five-concussion run, Goodwin has not been able to find the same level of success that he had in his breakout season in 2017.

As you can see, Goodwin played only 33 snaps the rest of the season after getting knocked out in Week 6, and he only had 1 catch for 5 yards on 5 targets, with multiple drops.

Before the head injury sustained against Washington, Goodwin was a low-target receiver, but still somewhat valuable because opposing defenses had to respect his speed. The Niners used play action to set up shot plays to him, though his lone big play down the field was on a busted coverage by the Bengals.

Here are all of Goodwin's targets in 2019. As you'll see, you could ding him for four or five drops on just 21 targets:

Goodwin's days as a starting NFL receiver are very likely over. However, he does make some sense in something of a "DeSean Jackson short-term insurance" role.

Should the oft-injured Jackson go down for a game here or there, or should he need some in-game rest, Goodwin's speed is well-known around the league, and could fill Jackson's role.

He could serve in short spurts as a low-target speed receiver, who could force opposing defenses to continue to respect the threat of getting beaten over the top, thus keeping the short-to-intermediate areas of the field unclogged for the likes of Zach Ertz, Dallas Goedert, and Miles Sanders.

Normally, allocating a roster spot to such a player who wouldn't contribute on special teams might not be prudent, but with the addition of two in-week roster spots in the new collective bargaining agreement, his inclusion on the roster as little more than Jackson's backup could be more feasible.