The rumor mill continues to churn as Devonta Freeman, Carlos Hyde and LeSean McCoy are again linked to Philly. 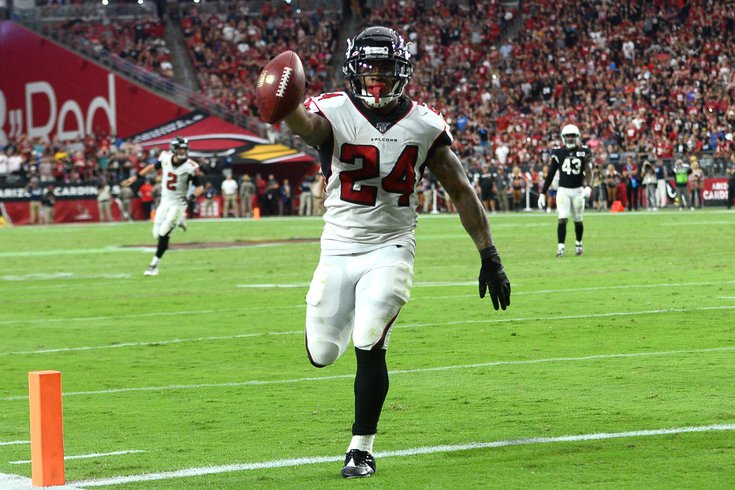 The Eagles have reportedly been in touch with free agent running back Devonta Freeman.

Over the last few weeks, we've wrote several times about the Eagles' need for a veteran running back to not only help spell starter Miles Sanders, but also to provide an experienced voice inside the meeting room who can possibly serve as a mentor to the second-year running back out of Penn State.

The three names that seem to keep coming up are: LeSean McCoy, Carlos Hyde and Devonta Freeman, each of whom make sense for the Eagles for different reasons.

On Thursday, ESPN's Tim McManus added some fuel to that rumor mill fire by not only confirming that the Eagles have their sights set on one of the aforementioned backs, but that they've been actively working on bringing one in and plan on making a signing in the "near future."

The Philadelphia Eagles are looking to add a veteran running back in the near future and have narrowed their focus to three players, according to sources: Devonta Freeman, Carlos Hyde and LeSean McCoy.

The Eagles are bullish on second-year back Miles Sanders, believing he has the makings of a Pro Bowl-caliber player, and envision a role for Boston Scott that is at least similar to last season's, but want to add depth and talent to a group that also features Super Bowl LII standout Corey Clement.

The Eagles have already reached out and expressed interest in Freeman, according to a league source. He has fans in the Eagles' building, including running backs coach Duce Staley, whose relationship with Freeman dates to Freeman's playing days at Florida State.  [espn.com]

Perhaps some of the impetus for this story to come out when it did has to do with the fact that the Seahawks reportedly made a one-year offer worth up to $4 million to Freeman earlier this week and have also been in touch with Hyde.

Last year Freeman, 28, had one of his worst seasons as a rusher, finishing with just 656 yards on 184 carries (3.6 yards per carry) and two touchdowns. However, he remained a dangerous threat as a receiver out of the backfield, hauling in 59 receptions for 410 yards (6.9 yards per reception) and four touchdowns. So, when you look at his total numbers — 243 touches for 1,066 yards and six touchdowns — it looks considerably better. Still, while he brings a versatility the Eagles covet in their players, he's also undersized at just 5-foot-8 and 206 pounds, and given what the Eagles already have at the position (smaller, versatile running backs) and what they are lacking (a bigger, bruising rusher), they might be best suited looking elsewhere.

That could wind up being Carlos Hyde, who was first linked to the Eagles a few weeks back by Adam Caplan on his Inside the Birds podcast with Geoff Mosher.

Hyde will turn 30 in December, an age typically looked at as the end of the line for most running backs, although more and more players are playing successfully beyond that age as teams run less and opt for running-back-by-committee over a single workhorse in the backfield. And, with just three seasons of over 200 touches, Hyde likely still has some tread on his tires.

Last season in Houston, Hyde showed that by having one of the best seasons of his career. The six-year vet totaled 255 touches, the second-most in his career, but also finished with the second highest yards-per-touch number of his career. Hyde set a new personal high for rushing yards in a season with 1,070 in 2019, and although his receiving numbers were low, that was likely more of a product of his environment than a knock on his abilities. After all, Hyde had 59 receptions back in 2017 with the 49ers, so he's more than capable of being a receiving threat out of the backfield.

And, finally, that leaves Eagles all-time leading rusher LeSean McCoy, who has not been shy in his desires to possibly return to Philly and retire with the team for which he grew up rooting.

McCoy, who would bring some of those same size concerns as Freeman, along with worries about his age and ability to stay healthy, won a Super Bowl with the Chiefs, even though he was inactive for the big game, and finished the season with just over 100 carries. However, as he said on Good Morning Football last Wednesday, he has his sights set on one more season in the NFL.

Last year, after being released by the Bills, McCoy said he didn't have enough time to test the market and find the right team, so instead opted for a familiar face in Andy Reid. This time around, he's had several months to evaluate his options, and isn't ruling out a possible return to Philadelphia.

"I could see that. On another note, since I left, you haven't seen the 25 active in green, so you never know," McCoy said with a bit of a smirk on his face. "I'ma keep my options open, though. I could see myself there in Philly. Like I said, that's home, so you never know."   [nfl.com]

That, of course, wasn't the first time this offseason that McCoy has hinted at rejoining with his old team. Previously, he and wide receiver DeSean Jackson talked about it being time the two reunited again when McCoy posted "PHILADELPHIA=home ❤️❤️" on Instagram. And shortly after that, he said that he wanted to join a team where he could help a young running back (like Sanders, perhaps) learn and grown.

No matter how badly McCoy wants to return, however, there are some things working against him. For starters, he will be 32 by the time training camps open, whenever that is. In recent years, the Harrisburg native has seen his production trail off as he's found it harder to stay on the field. Over the last two seasons, McCoy has fewer than 1,000 rushing yards total after finishing six of his previous eight seasons with over 1,000 yards each. That, however, had more to do with the veteran back taking on a lesser role as his age and health became a factor.

Last season in Kansas City, Shady looked slightly more like his old self. In 2019, he averaged 4.6 yards per rush (on 101 carries) in a shared role, his highest average since 2016, and finished with 646 yards from scrimmage and five touchdowns. So, for the Eagles, what it really comes down to what exactly they are looking for in a veteran backup running back and whether or not his asking price is reflective of the role they need him to fill.

No matter what way the Eagles opt to go, they have some options, each of whom would bring a slightly different skill set to Doug Pederson's offense. Now, it becomes about how much they're willing to pay for what could very well be a one-and-done deal.

MORE: Three free agents who make sense for Eagles — and one who no longer does