Pederson said the two will compete for the No. 2 job, but the veteran already has a significant advantage 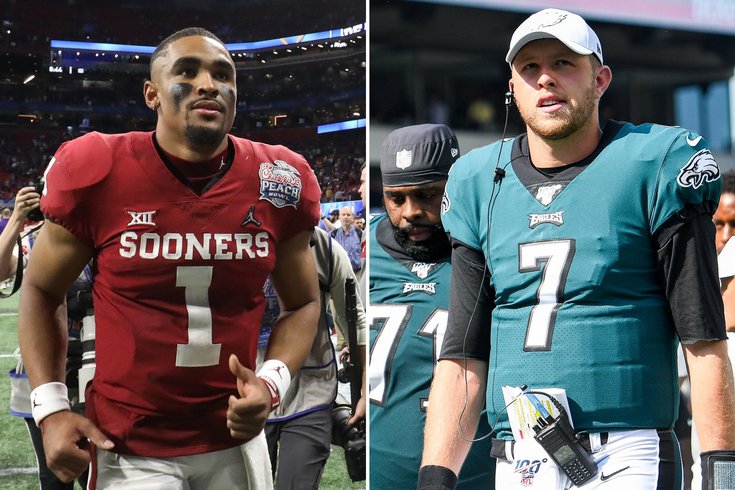 The biggest story surrounding the Eagles this offseason has been the team's surprising decision to take quarterback Jalen Hurts in the second round of the NFL Draft, a decision made even more complicated by the fact that they inked starting quarterback Carson Wentz to a lucrative — and longterm — contract just last year.

The move sent shockwaves through the fan base as many in Philadelphia tried to decide if this was a potential threat to Wentz' status as the franchise QB, a way to add some wrinkles to their offense by bringing two-quarterback sets to their playbook, or simply a way of locking down a cheap backup option for the foreseeable future.

In the weeks since the Eagles took Hurts, we've wondered ourselves, and keep coming to the conclusion that the answer likely a combination of those last two options, with Hurts having the ability to both add another dimension to the offense and grow as a professional quarterback and learn the offense as he settles in as Wentz' longterm backup.

With a shortened offseason, however, there's a legitimate question as to whether or not Hurts would be ready to take over as the backup from Day 1. It's tough enough for a rookie quarterback to get up to speed in his first offseason, so there's a chance he might not have been ready either way, but the COVID-19 pandemic forcing teams into virtual offseasons so far in 2020, the learning curve for rookies will be even steeper than normal.

And while navigating a pandemic might be new waters for the NFL, it's not like the league doesn't have experience dealing with shortened offseasons, as was the case coming out of the 2011 NFL lockout. Doug Pederson was an Eagles assistant at the time, and remembers how much more difficult it was to get rookies up to speed due to all the meetings and on-field work they missed.

"I think 2011 is a good comp to where we are for the young players," Pederson said during a conference call with reporters on Tuesday. "Obviously, this would be the time of year where we're right in the middle of Phase 2 and kind of preparing for Phase 3, the OTA aspect of our offseason. We'd be in the building, a lot of meeting time, a lot of extra meeting time with our rookies trying to get them caught up with our playbook. So we're making due obviously with the virtual setup and the coaches have done a great job of meeting, and preparing, and getting the guys as close to ready as possible. But we do need the grass time to see what these guys can do and see what they have taken away from the offseason from a mental standpoint."

The Eagles coach also remembers how important veterans were during that year, something he thinks will be the case again in 2020, especially at the quarterback position.

Luckily for the Eagles, if they don't feel that Hurts will be ready to take over if Wentz goes down, they have a veteran, albeit one with little on-field experience and a much lower ceiling than the rookie, who is familiar with the system and could be plugged in at a moments notice.

"Having played in this league for so long and seeing this pandemic and thinking back to when we came out of the lockout year, I think early on in this season, this becomes a veteran-laden football season." —Pederson

And to hear Pederson tell it, it sounds like there's a good chance Nate Sudfeld, not Hurts, will start the season as the No. 2.

"Having played in this league for so long and seeing this pandemic and thinking back to when we came out of the lockout year, I think early on in this season, this becomes a veteran-laden football season," Pederson said. "Football teams are going to have to rely on their veteran players, and Nate [Sudfeld] is one of those guys for us. He's been on our roster now for the last couple of seasons and he knows exactly what we're doing. I have a ton of confidence in Nate to become the backup quarterback. Nothing is ever handed to anybody, and we always try to create competition at every position, and quarterback — as you guys know — is not exempt from that. But I fully expect Nate to come in and be aggressive and do the things that he's capable of doing and become the backup to Carson [Wentz]."

That's not necessarily a shot at Hurts, who unlike in past seasons will likely still be able to dress as the No. 3 quarterback and possibly see the field when Pederson wants to get tricky given a rule change that will increase the number of active players on game days.

So far, Hurts has been doing all the right things according to Pederson. The biggest issue is the inability to see him put what he's learning from studying the playbook into practice on the fields at NovaCare. And because of this lack of preparation, the Eagles may ease Hurts along slower than they would in a typical offseason. (Remember, it's not like they're opposed to plugging in a rookie. Wentz started Week 1 as a rookie, and that seemed to work out just fine.)

Still, with Wentz already in place, there's no reason to rush Hurts along, even if they did spend a valuable to acquire him.

"And then with Jalen— Jalen's about right now just learning our system. And he's another one, another young player that we've drafted who, there's a lot to learn from the quarterback position," Pederson added. "Are we going to take it a little bit slower with him until he grasps the offense? You might have to. What I like about it is that there's always the unknown. And the unknown is how well a guy, I think, can progress. And then once we get them on the grass, put them through the drills, put them through practices, and then we see exactly what these guys are all about. But right now, Jalen is doing an outstanding job of picking up the offense, spitting it back to Press [Taylor] and understanding what we're trying to get done. And we go that route with him right now at this time."

Pandemic-shortened offseason or not, easing Hurts into that backup role might not be the worst thing in the world for the rookie, especially since the Eagles have the luxury of doing so.