What they're saying: Three free agents who make sense for Eagles — and one who no longer does 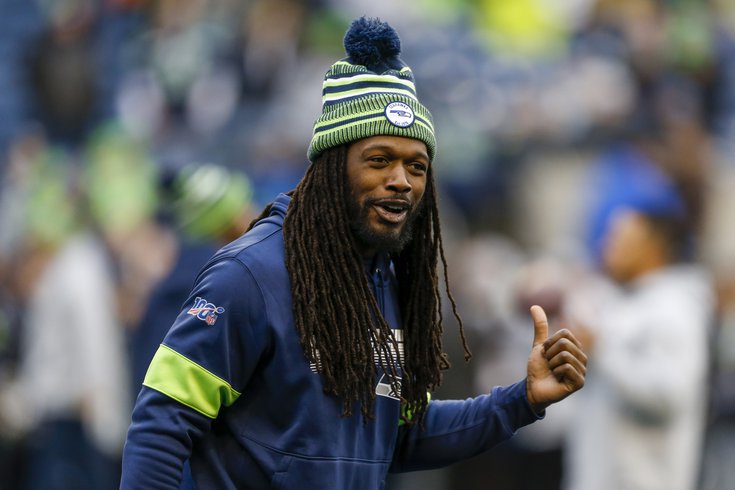 As we've mentioned several times over the last few weeks, the Eagles are almost certainly not done adding players to their roster, despite the majority of this year's free agent class already having found new homes. The Birds still have holes to address on both sides of the ball, including running back, defensive end and linebacker, to name a few.

But just because the names and resume aren't top-of-the-pile quality, that doesn't mean that the Eagles can't make an impactful addition this late in the offseason. They've done it in the not-so-distant past, including at one of their current positions of need, when they went out and signed LeGarrette Blount prior to their Super Bowl-winning season back in 2017.

So does Howie Roseman have any tricks left up his sleeves this time around? Or will the Eagles' patience — and salary cap inflexibility — force them to miss the opportunity to make a meaningful addition between now and the start of the season? For starters, it helps knowing who is out there, and whether or not they'd even make sense in Philly. With that in mind, let's kick off today's edition of What They're Saying with a look at three free agents who make sense for the Birds, followed by one who likely no longer does...

The best of what's around

Over at ESPN, three of their national NFL experts took a look at the current free agent landscape and tried to predict where it would make the most sense for the top remaining players to sign. And three of those players were linked to the Eagles.

First up is a familiar one for Eagles fans, as anyone following the team should know of their reported interest in a possible reunion with the future Hall of Fame offensive tackle. The other teams listed for Peters were the Redskins (Bowen) and the Chargers (Fowler). But Yates seems to think it makes the most sense for Peters to return to the Eagles, possibly to finish his career although he said recently he could see himself playing into his 40s.

The only way that would happen in Philly is if the team totally gives up on last year's first-round pick, Andre Dillard. And while they don't seem ready to call him a bit just yet, there is concern after he struggled when called upon during his rookie campaign. Still, if Peters can still play at a high level, it might not be the worst idea to get your franchise quarterback a little extra protection...

Peters spent 11 seasons in Philadelphia, starting 140 games. The Eagles re-signed him to a one-year contract last year, and he started 13 games in 2019.

Yates: Eagles. There seems to be some buzz surrounding a return to Philly for Peters, who will immediately take back over at the left tackle spot. Andre Dillard, a first-round pick in 2019, has plenty of promise, but his rookie season came with hurdles. Peters back to the Eagles adds up.  [espn.com]

Another name that may look familiar to Eagles fans, at least those who read this site regularly, is Mark Barron, who we covered recently in our look at which linebackers the Eagles could target to fill that specific name. Although he's not likely an every-down player, he brings the kind of versatility (he started as a safety before transitioning to linebacker) Jim Schwartz and the Eagles like.

After letting Nigel Bradham go — he still remains available, however — the Eagles likely need to add some depth at the position, and they could certainly do worse than Barron.

Barron, a 2012 first-round pick, had 82 tackles, three sacks and an interception with the Steelers last season. He enters his ninth NFL season looking for his fourth team. [...]

Fowler: Eagles. Barron doesn't have elite speed but is still capable in coverage. The Eagles can add a situational linebacker to help with their third-down defense, and linebacker is an area in which Philly could add depth.  [espn.com]

And finally, there's was quite a surprise among the trio of names suggested for the Eagles, mainly because of the position he plays. The Eagles already have a lot invested at defensive tackle — and seem to have a bigger need for depth at defensive end — but it wouldn't be totally shocking to see the Eagles bulk up even more at what has become one of the most important positions in Jim Schwartz' defense.

Daniels was picked up last season by the Lions after spending his first seven seasons with the Packers. He was limited to nine games because of a foot injury and went on injured reserve in Week 15 with an arm injury. [...]

Bowen: Eagles. When the Eagles made their championship run in 2018, the defensive line was deep. Adding a veteran such as Daniels gives them another interior tackle who can log reps -- especially in the postseason.  [espn.com]

Another free agent we've covered quite a bit on this site is defensive end Jadeveon Clowney, who entered the offseason as one of the top pass rushers on the market but remains unsigned, largely because of his sky-high asking price, which was around $20 million when free agency began and has reportedly only dipped a little bit in the months since, despite the demand seeming to dry up considerably.

In a recent interview on 97.3 ESPN Radio in Atlantic City, Eagles insider and co-host of the Inside the Birds podcast Adam Caplan said that the Eagles are all but out on Jadeveon Clowney and would need the free agent's asking price to be almost cut in half before they'd seriously consider bringing him in. And that just doesn't seem realistic.

Two months after hitting NFL free agency, one of the league's most recognized pass rushers remains without a team. And unless he's willing to basically cut his initial salary demands in half, Jadeveon Clowney has little chance of coaxing an offer out of the Philadelphia Eagles. Or at least that's according to SiriusXM's Adam Caplan, who reported recently on ESPN Radio that the Eagles would likely only consider the former Seattle Seahawks starter for $10 million or less.

"They're not interested in the player," Caplan told New Jersey's 97.3 ESPN. "Unless he's willing to take a one-year deal at a significantly reduced price -- probably under $10 million or no more than $10 million, I don't even think they make the call. And even then, they're done ... bringing guys in with an injury history."

The Eagles checked in on Clowney's asking price early in the process, Caplan indicated, but once they got an initial idea of his desires, "that was a nonstarter, and that was it."  [cbssports.com]

The good news for Eagles fans is that they still have some other options...

RELATED: Ten DEs the Eagles could still add via free agency or trade

ESPN's Mike Clay took a look at some of the biggest moves made in the NFL this offseason and put together a list of which team's had the biggest improvements at any one position. And the Eagles found themselves checking in fairly high on the list as Clay seems to think the team's upgrade from Ronal Darby to Darius Slay is the fifth biggest upgrade in the entire league.

The Eagles traded for Slay following seven consecutive seasons of finishing ninth or worse in yardage allowed to opposing wide receivers. Philadelphia has allowed the most targets, receptions and yardage to the position during the span, and it's not close. Meanwhile, Slay quickly emerged as one of the league's premier shadow corners after being selected in the second round of the 2013 draft. He has at least a pair of interceptions and 13-plus passes defensed each of the past six seasons. In fact, Slay's 99 passes defensed since 2014 are easily most in the NFL. He joins fellow newcomer and slot man Nickell Robey-Coleman in Philadelphia's overhauled secondary.  [espn.com]

After the NFL schedule came out, we took a look at all the local experts' picks for each game of the 2020 season. But as we all know, the final results only tell part of the story of a team's seasons. And over at NBC Sports Philadelphia, Roob offered up some interesting predictions on different players and stats for the year. And while the first one was arguably the most eye-popping, some of the ones listed under his "quickie predictions" — like Jason Peters returning or Jalen Mills being moved back to cornerback — were just as interesting and likely have as big of an impact on the team as which wideout has the most receptions.

1. The surprise leading WR: Greg Ward began last year on the practice squad and didn’t play on offense until Week 11. But he caught 31 passes the last seven games, which was only 12 off the team lead by a WR for the entire season. Despite him not playing until Week 11. Ward was really the Eagles’ only reliable WR the last month and a half of the season, and that won’t be the case this coming season. But he runs such good routes out of the slot and has such good hands and knows how to get open, and Carson Wentz clearly likes throwing to him.

Nelson Agholor doesn’t make it to opening day with the Raiders … Dallas Goedert leads the Eagles with nine TD catches … Derek Barnett has a career-high 7 ½ sacks … Fletcher Cox joins Reggie White and Pete Pihos as the third Eagle to make six straight Pro Bowls … Undrafted rookie Raequan Williams out of Michigan State makes the team as the fourth defensive tackle … Jason Peters signs with the Eagles … DeSean Jackson plays 11 games and catches 37 passes for 592 yards and four TDs … JJ Arcega-Whiteside is a little better but only catches 29-for-493 … Jalen Mills winds up back at corner and rookie K’Von Wallace starts the last seven games of the season … The Eagles sign and release Jordan Matthews at least twice.  [nbcsports.com]