Eagles may be interested in Jadeveon Clowney, but that doesn't mean they can afford him 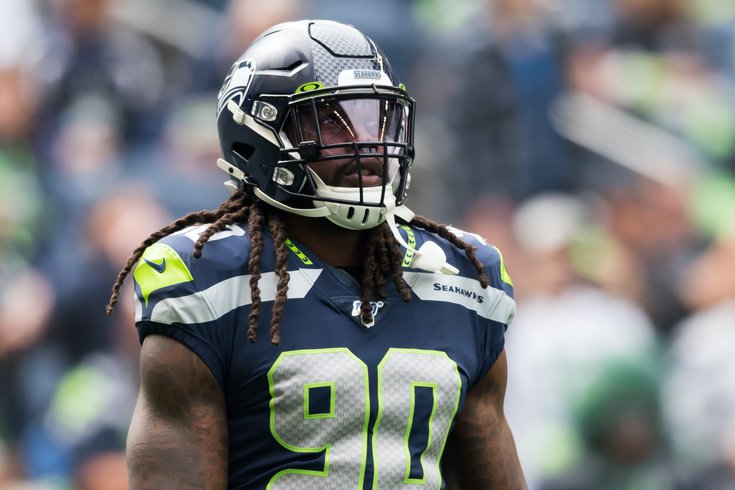 It may be getting late in the NFL offseason, but free agency is technically still open, and the Eagles still have some holes to fill.

One of those holes is at defensive end, where the Eagles seem set with their two starters, Brandon Graham and Derek Barnett, but lack depth at the position, one where it's important given defensive coordinator Jim Schwartz' penchant for rotating his ends in and out of games. Typically, the Eagles have at least three or four defensive ends they can plug in on any given play, and will sometimes use three on the field at once on obvious passing downs. Right now, their third and fourth defensive ends are Josh Sweat and Genard Avery.

We've already looked at 10 or so names for Eagles fans to keep on their radar, and late Tuesday night, a report surfaced linking the Birds to one of the players on that list, a guy who Eagles fans are likely familiar with for all the wrong reasons: Jadeveon Clowney.

Clowney, who knocked Carson Wentz out of the Birds' playoff loss to Seattle with a dirty hit that the NFL decided not fine, recorded just three sacks in 13 games last season with the Seahawks after spending the first five years of his career in Houston, where he averaged 8.5 sacks per year over his last three seasons.

And after a down year in 2019 that included a core injury, Clowney says he's ready to return. But he's not in any rush.

"I've got a few [offers], but the process for me is really just weighing my options and taking my time," he told Fox 26. "I ain't in no rush right now. I know with what's going on right now in the world, with the coronavirus and everything, it's a slow process until teams really can see me and see what I got and give me physicals and everything.

"So I ain't in no rush. I'm just waiting on the right opportunity and the right timing for me."  [espn.com]

But are the Eagles one of the teams really showing interest? According to one of the most reliable sources out there, that may not be the case.

“if his price was something the Eagles thought was fair, he’s already signed. No one is all in on anybody this time of the year, it’s May 6th.” - @AdamSchefter

“again, it’s May 6th, do you know the Eagles to be passive & not aggressive with players they want?” - @AdamSchefter

One of the things Clowney has working against him, other than his history against the Eagles — this wasn't the first time or even the second time he went after an Eagles QB — is his likely price tag. Clowney entered free agency seeking somewhere in the $20 million per year range, and clearly hasn't gotten that yet. Last month, reports suggested that Clowney had lowered his asking price by a few million dollars. Additionally, the Seahawks failed to extend an UFA tender, which would've been for $16.5 million, but they reportedly haven't ruled out a possible return.

Obviously, the market has dipped some for the 27-year-old defensive end, it's likely not going to drop enough to interest the Eagles in any real way. Even though they appear on the surface to have enough money to sign him...

At first glance, the Eagles do have money to spend on Clowney with $23,547,404 in cap space to work with. That’s actually good for seventh most in the league. But the Eagles won’t be looking to spend that entire amount given that they’re currently projected to be $50.7 million OVER the cap in 2021.  [BleedingGreenNation.com]

Moreover, the Eagles have to worry about signing all their rookies, which Howie Roseman typically likes to set aside about $9 million for. Beyond that, the same report from earlier this offseason details how Roseman and the Eagles like to maintain in-season flexibility by saving around $15 million in cap space heading into the season. If you do the math, they don't have anything left to spend, unless Roseman suddenly changes his spending philosophy.

Long story short, it appears that the Eagles are going to be much more conservative when it comes to adding another defensive end, and perhaps someone like Vinny Curry, who our own Jimmy Kempski had on his latest 53-man roster projection — even though he remains a free agent.

That deserves a serious [eyeball emoji] if you ask me...