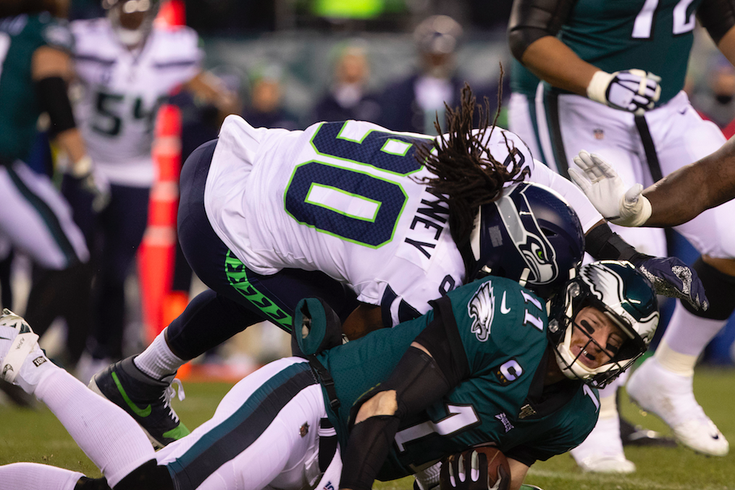 With the Philadelphia Eagles and Seattle Seahawks both eliminated from the NFC playoffs, some might say it's beating a dead horse to gripe any further about Jadeveon Clowney's controversial hit on Carson Wentz in the Wildcard round.

From the standpoint of that particular game, it's time to accept it and move on.

From the perspective of the league's handling of such hits in the future, it's a question that should be reviewed carefully by the NFL in the offseason. The decision not to penalize or fine Clowney impacts player safety and everything the league claims to take seriously about concussions.

One key figure in any such review will be former Eagles offensive lineman Jon Runyan, who now serves as the NFL's vice president of rules and policy.

Runyan was responsible for reviewing Clowney's hit on Wentz and reaching the determination that no fine or disciplinary action was warranted.

During an appearance Thursday morning on SportsRadio 94WIP, Runyan faced off with Angelo Cataldi to explain why he reached his conclusion. Runyan described the play as "right on the line," but ultimately one that didn't demand further action.

Here's the most relevant portion from Runyan:

Here’s the thing about it when you go through the whole process, Angelo. He’s not a defenseless player because he’s not catching a pass. He’s a runner, so he doesn’t have the roughing the passer protection. So you go down the list of stuff in unnecessary roughness. It wasn’t a leg whip, it’s not out of bounds. He’s not blocking someone out of bounds. His forward progress had not been stopped and he had not slid feet first. He was not on the ground. The next one is unnecessary running, diving, swinging your body against a player who is not anticipating contact...

The only one that you can get in there is using any part of the player’s helmet or facemask, to ram, butt or spear an opponent. Note, this provision does not prohibit incidental contact by the facemask or helmet in the course of a conventional tackle. So when you go back and look back at this play, it is really, really close. Carson’s elbow is still off the ground as Clowney’s arm – the first thing that contacts Wentz is Clowney’s arm, to his hip and lower back area. Then his shoulder rolls in and the helmet goes in ...The continuation of the play is deemed incidental at that point.

There may not be anything technically wrong with the explanation Runyan provided here, at least based on the letter of the NFL rulebook. If anything, it's more the focus of the review process that seems to lose the forest for the trees. Justifying a decision based on a slow-motion replay review of exactly which body parts created contact in which sequence doesn't really address the decision-making of the tackler.

Anyone watching that hit could see that Wentz was grabbed around the ankles and about to go down as Clowney followed through on his decision to strike him. The outcome of the play would not have changed at all had he pulled back or jumped over the tackle, with the exception of Wentz's game-ending concussion. That's kind of a big deal.

Runyan went on to explain that he does not review intent in cases like this one, partly because Clowney could exercise his collectively bargained rights as a player and simply deny that he intended to hit Wentz's helmet. The fact that Clowney wasn't flagged on the play would further support his case, and there's also the valid argument that Wentz was free to slide or throw the ball away for self-protection.

Still, the league ought to try using more common sense when reaching conclusions about hits of this nature. While you could argue that Clowney was just playing hard-nosed football — and plenty of people have — Runyan and the league should review how to minimize the likelihood of players making the tackle Clowney did in such a minimal gain situation. It knocked Wentz out of the biggest game of his career and inflicted the injury that poses the single biggest risk to the future of the sport.

You can call the whole thing "bang-bang," as Clowney did, or you can work to teach players situational safety that doesn't weaken competitive instinct or water down the game. Injuries will always be a part of football, but if the NFL wants another 100 years to celebrate, eliminating the plays that lead to needless concussions would go a long way.