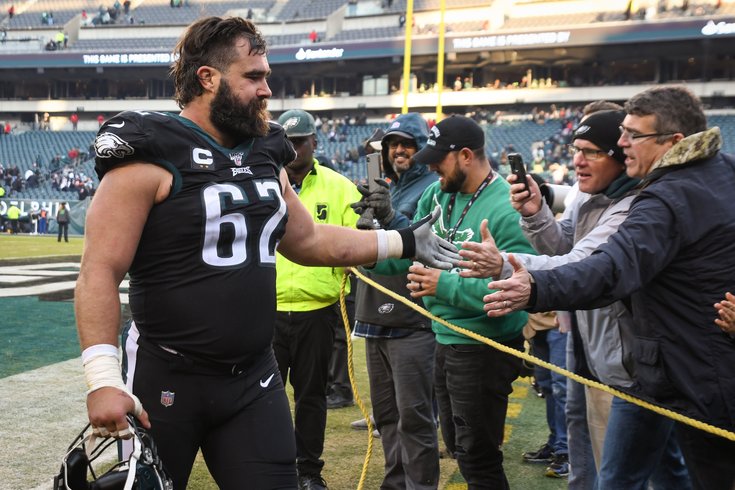 Jason Kelce during the Philadelphia Eagles game against the Chicago Bears at Lincoln Financial Field in Philadelphia on November 3, 2019.

In our Eagles chat last Friday, there were a lot of questions that we could not get to in time or other questions we did answer but could use more color. And so, let's do a mailbag post to answer some of the overflow.

Question from Mike: How many WRs do you see the Eagles adding this offseason, through free agency and the draft?

I think they absolutely have to add a veteran or two in free agency (or via trade, or whatever), because they have next to nothing in the way of players they can rely on, and you can't trust rookies to produce immediately. And then in the draft, because it is so loaded with talent, I think it would be a major opportunity wasted not to pick a couple more.

Question from Frank Gradia: Can this team still be a Super Bowl contender next year?

Of course they can. They have a franchise quarterback, in my opinion a top 5 offensive line, some really nice pieces elsewhere, and money to spend in free agency. Also, it's not as if there are a bunch of juggernauts in their way in the NFC, and they play in an absolutely awful division.

Question from SM: With the talk of big contract veterans potentially on the move, how can they honestly bring a guy like Alshon Jeffery back and let guys like Malcolm Jenkins walk. How would that go over?

I don't see a way that the team can bring Jeffery back. You can't have a guy repeatedly trashing his quarterback behind the scenes and keep him around, especially when he isn't even that good in the first place.

As for Jenkins, they won't just let him walk. If the two sides can't come to an agreement on a new deal, the team isn't just going to say, "OK, Malcolm, here's your release. Please don't sign with a team that plays us this year." I imagine they would be able to deal him to a team more willing to pay him. But yes, I believe they should work earnestly toward bringing him back in way that both sides can be happy. If Jenkins' asking price is simply unreasonable, then he could choose to hold out.

Question from Doug's Waterbottle: Has the team soured on Nate Sudfeld? Assuming Josh McCown is gone next year, do they look to add a back up or hand the job back to Sudfeld?

Doug Pederson said during the season-ending press conference the team viewed Sudfeld as the No. 2 last year.

"With Nate, it was unfortunate with the injury that happened at the end of camp," Pederson said. "I felt like Nate was poised and ready to be the No. 2 here for us. We'll see what happens this offseason with him."

Of course, Doug also said Mike Groh and Carson Walch would be back and the team fired them the next day.

I do believe they think Sudfeld can be the No. 2, and personally, I liked enough of what I saw of him in training camp and the preseason to think he was ready. The guess here is that the team brings Sud back on a reasonable deal, he becomes the No. 2, and the team attempts to draft another Day 3 guy to develop behind the scenes.

Question from Angry Man: Given that we've now learned the McCown tore his hamstring against the Seahawks, was that 46th guy really more important than having Sudfeld active? I'm going with no.

By my count, 18 teams don't even carry a third quarterback on their 53.

If the Eagles suffered an inordinate number of injuries at some other position, then the gripe would be, "Why was the third quarterback active just to sit on the bench the entire game?"

I actually spoke with my friend Tommy Lawlor about this issue a week or so ago, and he made the point that the league should expand the number of available players on game day.

Question from Rainbows over Darby: They have to keep some players. I would retain Jalen Mills before Ronald Darby. Thoughts?

We'll get to this in a little more depth when we publish our "stay or go" post on the corners, but yes, I would say that Jim Schwartz and the Eagles are going to value Mills more than any other team out there, and the guess here is that he'll return.

Question from Matt: Any idea what the conditions were on the Jordan Howard trade? Since he didn't play much, should be a 6, right?

Without knowing the exact conditions of the trade, I was told a while back that the "conditions are rough to move it up," so yes, it will very likely be a 6. I have this on my info-gathering to-do list when I go to Mobile for the Senior Bowl next week.

Question from MFlick: Which team will be the easiest Dumpster Fire target?

Last year, the easiest team to pick on, by far, was the Giants, which actually made them difficult to write in a way. I ended up writing like 4,000 words on them last year, solely focusing on Dave Gettleman, lol. So in terms of easiest team to make fun of, it'll be the Giants again this year, but they'll take the longest to write, because there's so much to get to.

Are you asking me where Young will line up? At OSU, he lined up more on the left side than the right side, but he played both sides. Washington has the No. 2 overall pick, and they’re almost certainly going to take Young after the Bengals take Joe Burrow with the No. 1 overall pick.

In the past, Ryan Kerrigan has always lined up on the left side of the defense, and faced off against Johnson. However, he’s in the final year of his deal and will count for $11,703,125 on their cap. Since they drafted Montez Sweat in the first round last year, and Ryan Anderson in the second round in 2017, it would maybe make sense for Washington to trade Kerrigan. If they go that route, You will probably see Young line up opposite Johnson.

Question from Rules: The PI challenge rule was more bad than good and should get tossed. Agree?

I think that you should be able to challenge just about anything. However, I HATE the idea of “not enough to overturn,” which was the biggest problem with the PI rule. They simply weren’t overturning obvious calls on the field. As I have stated repeatedly, I support Adam Carolla’s “unbiased gimp” solution.

Question from Fool me once: We have repeatedly heard that other teams called out the Eagles' offensive plays before the snap. Is it a formation giveaway, predictable calls in certain situations, lack of innovation, personnel group giveaways, or not varying audibles enough?

I think it was just K.J. Wright, right? Anyway, I usually disregard that stuff, unless there’s evidence on film that players are clearly keyed in on what offenses are doing. Those kinds of comments are more often than not self-serving nonsense from players trying to pump themselves up.

Question from kimmy jempski: Next stop for Peters is Canton? Aside from him, who do you think has a shot of making it to the hall?

I think JP is going to play for another team this year, and then his next stop will be Canton. As for the best shots of reaching the Hall of Fame among current players, I'd rank them like so:

• Jason Kelce: Three straight First-Team All-Pro nods, Super Bowl champion, fun personality, iconic speech, and he is arguably the most athletic center ever, which makes him less boring than your typical interior offensive lineman candidate. Pile one more First-Team All-Pro on the pile, and he's got a real argument.

• Zach Ertz: I think Ertz's chances depend on his longevity. The average Hall of Fame tight end has 580 catches for 7,540 yards and 52 TDs. Ertz will blow by those numbers in the next few seasons, but the standard is going to be raised with so many more tight ends raising the bar in the modern NFL. If he plays another six years and averages around 900 yards per season, I think that will solidify his chances, which is obviously a lot easier said than done.

• Carson Wentz: It's way too early to get into Wentz's Hall of Fame chances, but if I'm ranking who will be in Canton if I go to visit, in, sayyyy, 2060 (assuming the president doesn't completely destroy the planet), this is where I'd rank Wentz among his current teammates. He has the ability. Two more Super Bowls will easily get him in, maybe one if he starts putting up monster numbers consistently every year.

• Lane Johnson: His chance are getting ruined by the moronic Pro Bowl / All-Pro voters who have a senseless left tackle bias, but if he plays in the league for the next 5-7 years at the level he has played at for the last three, he would be deserving.

• Darren Sproles: Great career as a utility player, but he's a long shot.

• Fletcher Cox: He doesn't have the stats necessary to persuade voters.

• DeSean Jackson: Jackson will go down as one of the best deep threats in NFL history, but there are no shortage of receivers from his era that will have far better career numbers overall.