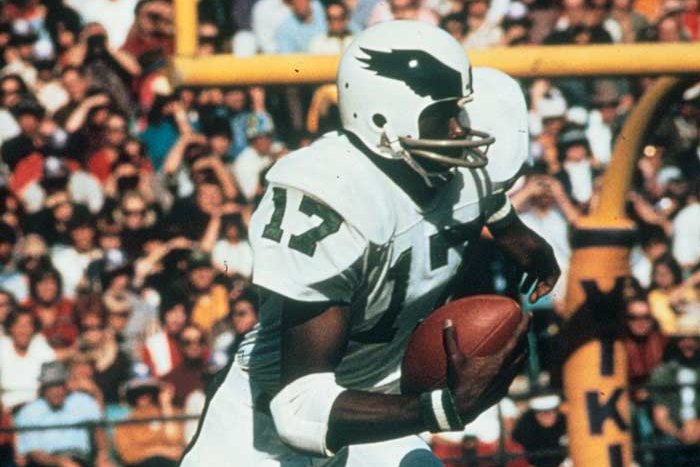 It may have taken longer than it should have, but Eagles legend Harold Carmichael has been selected to the Pro Football Hall of Fame in Canton, where he will be enshrined later this year along with the 19 other members of the centennial class of 2020.

Carmichael, who caught his last pass for the Eagles in 1983, was one of 10 senior players who got the call on Wednesday morning as part of an expanded class to celebrate the NFL's 100th anniversary. In 13 seasons with the Eagles, Carmichael caught 589 passes for 8,985 yards and 79 touchdowns, and despite the shift to a more passing-oriented league, he still holds the Eagles franchise record in each of those three categories (although Zach Ertz is coming for some of those numbers).

"Congratulations to Harold Carmichael on being selected to the Pro Football Hall of Fame," Chairman and CEO Jeffrey Lurie said. "Our entire organization is so proud to see Harold earn this well-deserved honor. Harold revolutionized the wide receiver position and became one of the most productive players of his era and in the history of our franchise. He was inducted into the Eagles Hall of Fame in 1987 and his records will always rank among the all-time greats, but Harold's true contributions to our game extend far beyond his on-field accomplishments.

"Harold has served as a role model, mentor, and friend to so many during his four-plus decades in Philadelphia as a player, executive, and ambassador. He is a one-of-a-kind person who loves this organization, who loves this city and its fans, and who treats everyone with dignity and respect. We are excited to celebrate this honor with Harold and his family."  [philadelphiaeagles.com]

Here's the moment Carmichael found out he was headed to Canton:

Exclusive Look: HOF President David Baker calls @lookitin to inform him that he has been elected to the Hall of Fame.#PFHOF20 | @Eagles pic.twitter.com/qYH2ZfwvNs

Carmichael was a beast during his time in the NFL, leading the NFL in catches, receiving yards and touchdowns for an entire decade, from 1973-83, and changed the receiver position with his superior size and catching ability. Unfortunately, this writer wasn't around to see Carmichael play live — only on highlight videos — so we'll let someone who actually saw him on the field describe what he was like as a player. Here's Paul Domowitch of The Daily News on Carmichael:

At 6-foot-8 and 225 pounds, the 1971 seventh-round pick out of Southern was nothing like the NFL had ever seen before at wide receiver.

His superior size and catch radius made it difficult for defensive backs to defend him. In his third season with the Eagles in 1973, he led the league in receptions (67) and receiving yards (1,116). It was the first of nine straight seasons with 40 or more catches and five or more touchdowns. From 1973 through 1983, no receiver in the NFL caught more passes for more yards or more touchdowns than Carmichael.

“What quarterback wouldn’t want to have a guy like that to throw to,’’ said Ron Jaworski, who spent seven seasons with Carmichael. “Not only was he 6-8, but his hands touched the ground. He had a wingspan that was amazing.’’ [inquirer.com]

A four-time Pro Bowler, Carmichael was a fan favorite during his playing career in Philly, and has spent the last two-plus decades working for the organization in various roles from mentoring younger players to partaking in community engagement with those same fans who came to love him on the field.

And that love was for good reason after seeing what he was able to accomplish as a six-foot-eight receiver.

“He introduced me to the concept that no ball was uncatchable,’’ former Eagles coach Dick Vermeil, who was one of the finalist for the two coaching spots in the 2020 HOF class, told Domowitch and the Daily News. “I saw him make catches that, if I was really bright, I would’ve given him more opportunities to do it.

“You saw him do things that you hadn’t seen anybody else do. On a daily basis, watching him do what he did as well as he did it, you just pretty quickly realized that this guy was a freak of nature out there at his position.’’

Bill Cowher and Jimmy Johnson, who both made it over Vermeil, are the two coaches getting enshrined. Also joining this class will be late NFL Films president Steve Sabol, former Giants general manager George Young, and former commissioner Paul Tagliabue, who will go in as contributors. The final five modern-era inductees will be announced on February 1 in Miami, the night before the Super Bowl.