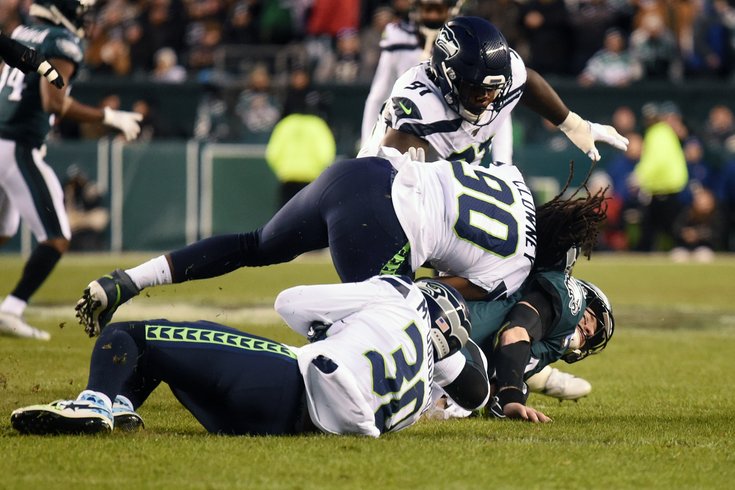 Eagles quarterback Carson Wentz’s decision to report his concussion, suffered on the play above, and remove himself from Sunday's playoff game was praised NFL’s chief medical officer Dr. Allen Sills. The physician said he applauded the Eagles quarterback for understanding the potential severity of football head injuries.

Philadelphia Eagles’ quarterback Carson Wentz suffered a concussion following a helmet-to-helmet hit from behind by Seattle Seahawks defensive end Jadeveon Clowney during the first quarter of the Eagles’ 17-9 loss to the Seahawks on Sunday at home in the NFC Wild Card round, and it forced the fourth-year QB to exit the game.

Now the 27-year-old Wentz’s decision to report his concussion is drawing praise and admiration from the NFL’s chief medical officer.

On Thursday, Dr. Allen Sills told Rob Maaddi, of the Associated Press, he applauded the Eagles quarterback for understanding the potential severity of football head injuries:

"I think what Carson Wentz did is heroic and should be highlighted as an example of how an unbelievably skilled and competitive athlete understands the seriousness of concussion injury and is willing to honestly report it and receive the care that he needs independent of his desire and drive to continue to participate in the game. Having a concussion and playing through it is not about toughness. That’s demonstrating a lack of understanding of the severity of the injury."

Wentz did stay in the game following the hit, but after reporting his concussion sypmtoms on the sideline, he was examined in the pop-up blue medical tent and ultimately taken to the locker room for further testing. After failing the concussion protocol, Wentz was ruled out for the remainder of the contest.

Sills called Wentz a role model for players of all ages and at all levels.

"Brain injuries are different than other injuries. Anytime someone has a sprained ankle, you can see their ankle swell up, or they dislocate a finger and you can see the finger pointing in the wrong direction," the doctor said the AP. "You can’t see a brain injury from the outside, but that does not make it any less severe or any less dangerous to the recipient than any of those other injuries."

Sunday was Wentz’s first career playoff start after missing out on the Eagles’ previous two playoff runs due to injury. While former Eagles quarterback Nick Foles stepped in for Wentz the last two years, it was 40-year-old backup Josh McCown who filled the void this past week when Wentz went down.

The NFL announced earlier this week that it will review the hit, but it is likely to result in nothing more than a fine for Clowney. In case you haven’t seen it already, here’s the hit levied by Clowney on Wentz, which many have dubbed "dirty." We'll let you watch and decide for yourself.

"He was a runner and he did not give himself up," NFL official Shawn Smith said after the game. "We saw incidental helmet contact, and in our judgement, we didn't rule that to be a foul. From what we saw on the field it was incidental."

On SportsRadio 94WIP on Friday, coach Doug Pederson confirmed the team has sent video of Clowney's hit on Wentz to the NFL offices to be reviewed, but he did not condemn the hit.

"It's a part of our game that we know happens, right or wrong," Pederson said to host Angelo Cataldi. "I'm not here to point the finger or point blame at anybody. It's something that we're trying to continue to educate our players, educate our officials, educate coaches, and the entire NFL to keep these types of plays out of our league."

Pederson said on Wednesday that Wentz had been doing "great" and "extremely well" since the injury.