Eagles' Doug Pederson insists he (not Lurie) made call to fire Groh, Walch 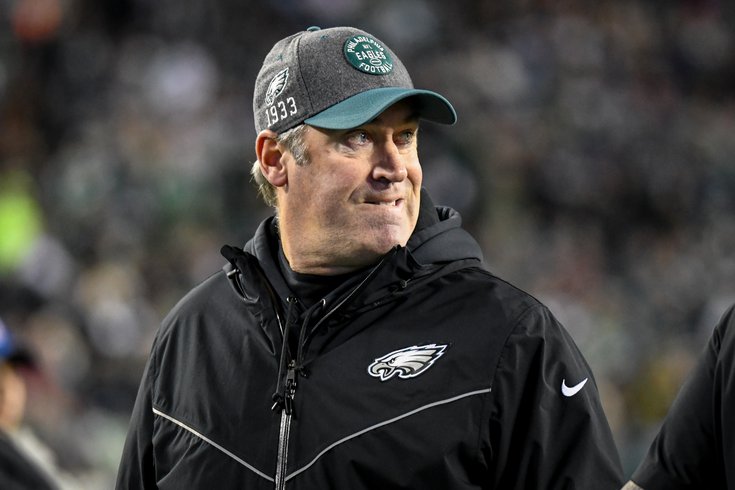 "By no means was there any influence there," Pederson told Angelo Cataldi. "Ultimately, it's my decision through the whole evaluation process. I have a bunch of conversations, but ultimately it's my decision."

Pederson created confusion on Wednesday during an end-of-season press conference with general manager Howie Roseman. When asked about the status of his offensive coordinator and wide receivers coaches, he initially said they would both be back with the staff.

The next day, both Groh and Walch were fired, as many fans had clamored for prior to the team's playoff push. Some took this reversal as a sign Lurie had intervened, overriding Pederson's power to determine his staff.

Pederson apologized in a statement for misspeaking about his coaching evaluations at Wednesday's press conference. He said Friday that he welcomes and relies on the input of Lurie and Roseman.

"Part of my evaluation, me personally, is with the owner, Mr. Lurie," Pederson said Friday. "I think it's important that he and I continue to stay on the same page, along with Howie. We do have some tough conversations, and I think from my standpoint, it's very beneficial to me, personally. It helps me lead the football team."

As the search for a new offensive coordinator begins, Pederson said he's looking for a coach who can "lead a room of men" and who possesses a sharp football mind. Asked specifically about running backs coach Duce Staley, Pederson said he could be a candidate.

"Duce is an important part of my staff. Duce has done an excellent job for me," Pederson said. "Everything is on the table. Everything is open for me, and he could be part of that conversation."

The team is still awaiting the outcome of a head coaching decision by the Cleveland Browns, who interviewed Eagles defensive coordinator Jim Schwartz earlier in the week. Schwartz will retain his position in Philadelphia if he does not end up in Cleveland.

Pederson described the 2019 season as "exhausting" and "exhilarating," noting both the attrition from injury and his team's 4-0 finish to reach the playoffs. He confirmed the Eagles have sent film of Jadeveon Clowney's knockout hit on Carson Wentz to the league office for review, but stopped short of calling the play unfair.

"It's a part of our game that we know happens, right or wrong," Pederson said. "I'm not here to point the finger or point blame at anybody. It's something that we're trying to continue to educate our players, educate our officials, educate coaches, and the entire NFL to keep these types of plays out of our league."

Wentz, who left his first playoff start with a concussion, was praised on Thursday by NFL chief medical officer Dr. Allen Sills.

"I think what Carson Wentz did is heroic and should be highlighted as an example of how an unbelievably skilled and competitive athlete understands the seriousness of concussion injury and is willing to honestly report it and receive the care that he needs independent of his desire and drive to continue to participate in the game," Sill said.

Pederson looked ahead to free agency and the draft with optimism after a disappointing end to 2019.