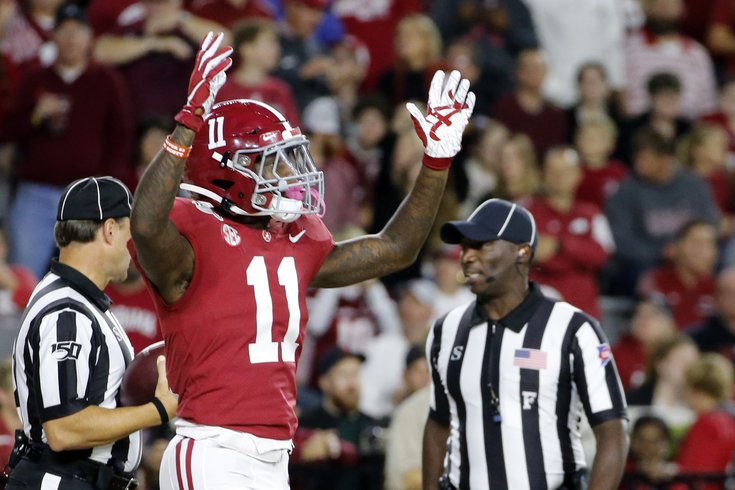 On Thursday, we published our first Philadelphia Eagles-only mock draft of the offseason. Today we'll take a peek around at some of the national guys and see who they have going to the Birds at 21st overall. Because the season hasn't ended yet, the Kipers and the Jeremiahs of the world have not yet published one.

Brandon Graham and Vinny Curry were the Eagles' two most efficient pass rushers, according to PFF, but Graham is 31 and Curry appears headed for free agency. Okwara's season ended in November, and while he wasn't quite as productive as a year ago, he's a high-upside prospect who explodes off the ball. He's listed at 240 but plays much stronger than that, and he'll likely add weight in the weeks leading up to the combine.

#JimmySays: There are significant concerns about Okwara's ability against the run. That, coupled with the fact that he is only 240 pounds, almost immediately disqualifies him as a possibility for the Eagles in the first round, at least as long as Jim Schwartz is the defensive coordinator.

Higgins gives the Eagles the best of both worlds at receiver -- he's tall and speedy down the field. Carson Wentz rejoices.

#JimmySays: I have Higgins going to the Eagles in my first Eagles-only mock draft, so I obviously agree with the fit here. Also, Chris and I seem to be on the same page in terms of Higgins giving the Eagles "the best of both worlds" at receiver. The Eagles need wide receiver talent in all forms — not just a burner — and Higgins can win in every area of the field.

Philadelphia clearly needs some improvement at the wide receiver position. Jefferson displays great body control and is capable of making plays downfield in that offense. It is a start for the Eagles, but they should probably address the position even further.

#JimmySays: The position is fine, obviously, and I like Jefferson. I just don't know if I like him this high. Yes, the Eagles should draft WRs. No, they shouldn't reach for them.

Throughout much of this season, it was obvious the Eagles need talent at wide receiver. Lamb has No. 1 potential and averaged an incredible 21.4 yards per reception this season.

#JimmySays: Unless he's some sort of awful person or is missing a kidney or something, Lamb ain't making it to pick 21.

The Eagles are in desperate need of a big-play threat in Carson Wentz's receiving corps given DeSean Jackson's age and a breaking-down Alshon Jeffery. Ruggs (6-0, 190 pounds) fits the bill as a field-stretcher who can also use his route-running skills to win on shorter routes.

#JimmySays: I know Ruggs is going to be popular among Eagles fans leading up to the draft, and while I don't think production is the end-all be-all in prospect evaluation, my concern would be about Ruggs' last eight games this season, when he averaged just under 50 receiving yards per game. That said, he's fast as hell, and even if he doesn't have great production in the pros, opposing defenses will have to at least respect the threat of him taking the top off the defense.

The Philadelphia Eagles appeared poised to draft Henry Ruggs III earlier this season when the team was floundering behind the Cowboys in the NFC East. But to get him here? The Eagles should be thrilled. Carson Wentz’s pass catchers are sorely missing speed, especially in the absence of DeSean Jackson, for the bulk of 2019. Ruggs is not just the fastest receiver in the draft, he may be the fastest player period. The upgrade here for the Eagles should help bring the big plays back to the offense.

If you watched the Philadelphia Eagles this year, you know their Achilles heel was the inability to stop big plays in the passing game. Injuries and a lack of consistency at the cornerback position was a major reason why, which means an upgrade or two will be in order this offseason. Alabama’s Trevon Diggs is one of the best playmaking perimeter defenders in this draft, and his man coverage upside is through the roof. This would be a steal if it happens.

#JimmySays: If the Eagles don't go wide receiver in the first round, I could absolutely see them going corner, though I'm not sure I like Diggs in the first round. I probably shouldn't put too much stock into a game in which he good cooked repeatedly by a great receiver in Ja'Marr Chase, but at the same time, I can't unsee it.

The Eagles are jumping for joy as they had one of the best cover corners in the draft fall to their pick. Hailing from "DBU", Fulton is the next in line of many impressive cornerbacks to come out of LSU. The Eagles secondary was in shambles during the final stages of the season and clearly their Achilles heal. Adding Fulton gives them a supremely talented option and one that contains much more upside than any other option on the roster.

#JimmySays: I love the idea of a team jumping for joy that a player fell to them in a mock draft.

Johnson has been one of the biggest movers up the PFF draft board this season. He allowed only nine completions from 22 targets for 112 yards over his last seven games in Pac-12 play.

#JimmySays: I really like Johnson and his fit with the Eagles... in round 2.