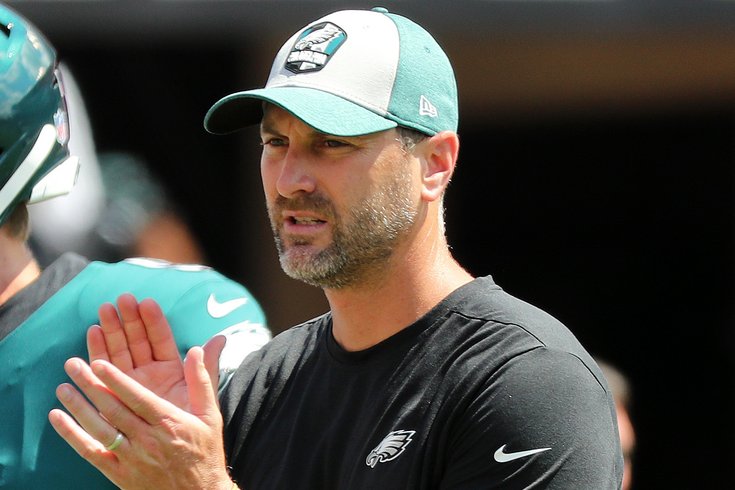 A day after Doug Pederson said that offensive coordinator Mike Groh and wide receivers coach Carson Walch would be back with the team in 2020, Pederson has announced, via the team's Twitter account, that both Groh and Walch have been fired:

Uh, alright. Based on the events of the last two days, it seems that this is very much a Jeffrey Lurie decision, and not a Doug Pederson decision.

As I noted yesterday, Doug Pederson had yet to meet with owner Jeffery Lurie when he gave Groh and Walch a vote of confidence. He did today. Lurie had pretty much decided by December that he didn’t want either back, an NFL source said. https://t.co/yldY0riZwW

The contributions from Frank Reich and John DeFilippo during the Eagles' Super Bowl season in 2017 are well documented, as the Eagles were dominant in the first quarter, on third down, and in the red zone that year. The Eagles' DVOA rankings the last three years:

After Reich and DeFilippo left after the 2017 season, Groh was promoted from wide receivers coach to offensive coordinator. The Eagles did not game plan for opponents the last two seasons as well as they had in 2017, as first quarter scoring was WAAAAAY down in 2018, and the the 2019 version of the offense failed to scheme receivers open, though certainly personnel factored in heavily there.

In Groh's defense, the Eagles' offense came alive down the stretch, as they put up at least 400 yards of offense in their final four regular season games, while operating with a skeleton crew at the skill positions. That was apparently not enough to save Groh's job, and his firing is probably the right move.

• DeSean Jackson got hurt Week 1, and was pretty much done for the season. Obviously that is not Walch's fault.

• Alshon Jeffery led all Eagles wide receivers with 490 receiving yards, which was good for 88th in the NFL. He was also accused of criticizing the starting quarterback for the second season in a row.

• Nelson Agholor regressed to his first- and second-year bust-like form.

• J.J. Arcega-Whiteside had a disastrous rookie season, in which he was afforded plenty of opportunities to contribute, but ended up as the fourth receiver in the playoffs behind three practice squad guys.

• Mack Hollins went eight games without making a reception before the team finally released him.

At the end of the season, the Eagles were forced to roll with guys yanked off of the practice squad, like Greg Ward, Robert Davis, and Deontay Burnett, and they were able to at least run their offense with those guys, but ultimately, the damage had already been done.

The Eagles will now be looking for their fifth wide receivers coach in five seasons.