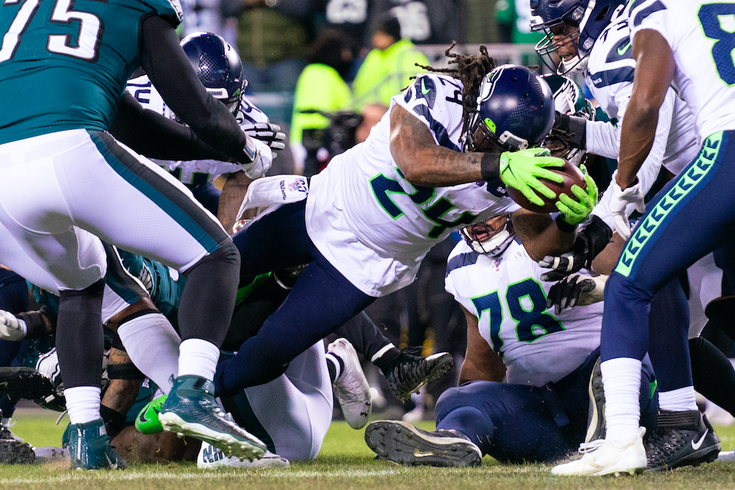 Seattle Seahawks running back Marshawn Lynch is best known for his powerful running style. He's second-best known for stonewalling members of the media in postgame interviews. He had one of those moments after the Seahawks beat the Eagles 17-9 in the Wildcard round of the NFL Playoffs.

Most of the conversation about the Philadelphia Eagles' season-ending loss to the Seahawks last Sunday has centered on Jadeveon Clowney's hit on Carson Wentz, the brilliance of Russell Wilson and the offseason priorities Howie Roseman will be tasked with addressing.

It would have been easy enough to forget that Marshawn Lynch, who returned to Seattle after a slew of backfield injuries, can always be counted on for poignant insight into the performance of his team.

With the exception of a vintage Beast Mode touchdown, Lynch was largely contained in Philadelphia. He ran the ball six times for just seven yards and caught two passes for 25 yards.

Five years ago, Lynch became famous for his media antics when he repeatedly stated that he was only speaking to reporters so that he wouldn't get fined. He's also had plenty of other shining moments in front of the camera.

After Sunday's game, Lynch was asked why the Seahawks had so much trouble moving the ball on the ground. His interviewer walked right into the deadpan literalism Lynch has perfected, giving him the opportunity to serve up this beauty.

Seahawks head coach Pete Carroll said he plans to get Lynch more carries in Sunday's divisional round game against the Green Bay Packers. Few in Philadelphia would want to see Seattle win this game, but if there's any bright side to that outcome, it's more of this flavor of comedy from Lynch.