What they're saying: Expert predictions for every game on Eagles' 2020 schedule 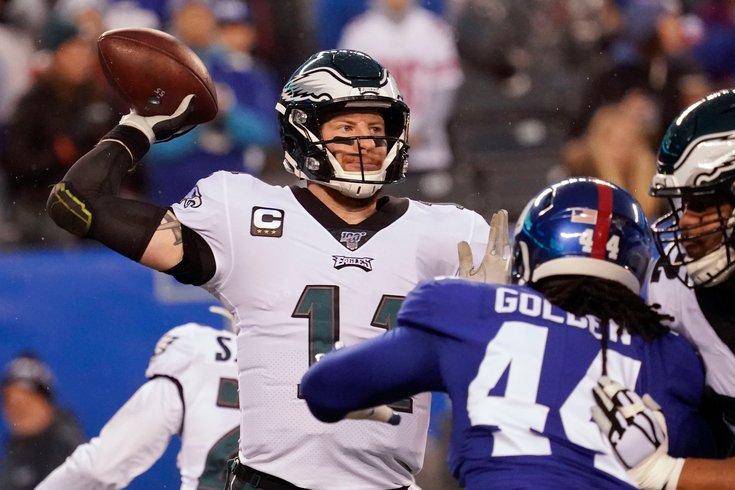 The NFL schedule came out for the 2020 season a few days ago, and if you are a true Eagles fans, you've already gone through all 16 games with your friends, debating whether the Eagles will go 10-6 or 9-7.

We've already broken down some of the biggest strengths and weaknesses for the Eagles' upcoming slate of games, and Jimmy Kempski himself went through the age old exercise of predicting each game's outcome immediately after the schedule came out.

We've decided to compile his, as well as the other prominent Eagles writers in the city's predictions in one place in our latest "what they're saying about the Eagles." Here's your one-stop look at most of the predictions from the experts:

Everyone but Tim McManus picked the Eagles to win in Week 1, and of course, he is one of the few who did not offer game-by-game explanations.

The Eagles open the season at Washington as they did in 2017, when they went on to win the Super Bowl. It’s the third time in four seasons they’ll open against Washington. This will be one of the best defensive lines they face all season, and it’ll be Ron Rivera’s head coaching debut with his new team. But the Washington offense still doesn’t have enough to threaten the Eagles, and Doug Pederson remains undefeated in season openers.  [The Athletic]

I guess the Eagles at home against the Rams is more of a sure thing than facing the lowly Redskins in Washington. This one was unanimous.

Here's how Shorr-Parks concisely summed up the Birds' second game:

Some matchups are pretty simple. Carson Wentz is a better quarterback than Jared Goff and Doug Pederson is a better head coach than Sean McVay. The fact this is in Philadelphia makes it an easy win for the Eagles.   [94WIP]

This is the biggest cupcake game of the year for Philly. Also, 11 of 12 Eagles writers have the team 3-0.

Joe Burrow may eventually become a good NFL quarterback, but that's going to take some time, and he won't have much help with this trash Bengals roster. If there's one game on this schedule that I'd call a lock, it's this one. Of course, I probably felt the same way about Detroit and Miami this time last year. Still, the Eagles are in a good position to start 3-0.  [PhillyVoice]

The first big test for the Birds in 2020 will come when they travel out west to face the defending NFC champions. And while (at least during a normal non-pandemic year) the below writers would be ecstatic about getting to travel to beautiful San Francisco, they aren't as excited about Philly's chances to win the game:

Here's a brief write up from McLane:

San Francisco could take a step back after last season’s run to the Super Bowl because of, well, its quarterback, Jimmy Garoppolo. But Kyle Shanahan is as innovative as coaches come and the 49ers should still have an elite defense. Winning on the West Coast is also never a sure thing.  [Inquirer.com]

This is where we finally start to see some major disagreements. Five of 12 Eagles writers are picking the Eagles to win across the state in Pittsburgh. Here's the breakdown:

With a split decision, let's look at one of the "win" takes from Smith:

The Steelers defense, led by Minkah Fitzpatrick and T.J. Watt, could give the Eagles fits. That said, I have real questions about the Steelers offense, primarily its quarterback situation. I’m not going to count on 38-year-old Ben Roethlisberger or Mason Rudolph to outplay Wentz.  [Inquirer.com]

The Eagles defense will be tested big time against the run-happy Ravens in what might be the best home game on the schedule. Doesn't look like there is a lot of confidence in the run defense:

I would have expected all losses, as I think the Ravens are better than the 49ers, who were a unanimous pick to win a few weeks earlier. Is home field that big an advantage? Here's why BGN's Gowton thinks Philly will win:

Lamar Jackson will probably regress to some extent following his MVP season. But he’s still going to be pretty challenging to defend. Baltimore’s defense is tough, too. Ultimately, Schwartz’s defense will step and Wentz will outshine Jackson in a win.  [Bleeding Green Nation]

After three brutal games against teams expected to contend, the Eagles get an easy win against a division rival at home on Thursday Night Football. The picks:

Martin Frank on why the Eagles will prevail in Week 7:

It's interesting to have Dallas Week come to Philly so soon in the season. Will the Eagles' secondary rise to the task to handling the Cowboys' high-powered aerial attack?

After last week’s Thursday night game, the Eagles get extra rest to prepare for Dallas. DeSean Jackson catches a bomb from Wentz in the second quarter, but he chucks the ball into the stands before crossing the goal line, resulting in a touchback. It doesn’t matter. He catches another bomb on the Eagles’ next possession, and they go into their bye with a second straight win.  [The Athletic]

A week off before the Giants is a recipe for success. Here's yet another clean sweep for the Birds over a division rival. Well, almost...

Bowen had to be the downer here didn't he?

The Eagles have won six of their last seven on the Giants’ field. Let’s switch things up. Figure the Eagles come off the bye lethargically, pencil this in for the infuriating, nonsensical loss that gets the fans frothing at the mouth.  [Inquirer.com]

There's no telling what the Browns will actually look like this coming season. Still, the Eagles writers don't see them as much of a threat.

All four writers at Inquirer.com picked the Eagles in Cleveland. Here's Domo's take:

Baker Mayfield badly needed a dose of humility last year and got one. He threw 21 picks and was sacked 40 times. New GM Andrew Berry upgraded Mayfield’s protection, signing Jack Conklin and drafting Jedrick Willis. But it won’t be enough.  [Inquirer.com]

In a rematch, at home again, of the Eagles' season-ending playoff loss last year, the writers are totally split on whether it will go differently this time.

It's another exact rematch from 2019. The Eagles had one of their best wins of the year at Lambeau last year.

Wulf tries to be funny — and succeeds — in predicting an Eagles win over an apparently injury-plagued Packers team:

The Eagles hold A.J. Dillon to 24 yards on 20 carries and intercept Love three times in an easy victory. On the flight home, Pederson thanks Brett Favre for playing middleman for Rodgers in passing along the Packers’ entire playbook.  [The Athletic]

We said the Ravens game was the best home game (the weather will be nicer...) but the Saints game is the other candidate. They will surely be underdogs at home for this one:

Above I wrote that I couldn't pick the Eagles to beat the Seahawks until I see the Eagles beat the Seahawks. That same premise could apply here to the Saints, but this game will be the third of three straight road games for New Orleans, a huge disadvantage. Couple that with crappy December weather, and this will be the Eagles' best chance of beating Drew Brees.  [PhillyVoice]

Even though they only won five games last season, the Cardinals are expected to be a difficult road test.

On paper you'd expect the Eagles to be more favored in Arizona. Gowton explains why they weren't:

As a Sean McVay protege, I’m wont to be skeptical of Kliff Kingsbury. But the Cards’ offense finished seventh in weighted DVOA last year after being dead last in 2018. Kyler Murray is bound to take a leap after showing promise as a rookie, especially now that he has DeAndre Hopkins to work with. Oh, and I’m sure even the 37-year-old version of Larry Fitzgerald will find a way to annoy the Eagles. The desert is a tougher place to play than it gets credit for.  [Bleeding Green Nation]

With the first Dallas game coming early, this second and likely more consequential one comes in the season's penultimate week, a 4:25 p.m. game that will surely be flexed if both teams are contending for the NFC East crown.

The Eagles will definitely have a chance to win this game, but ESP (like so many others), sees the Birds splitting the series:

This is easily the most exciting matchup on the schedule. Wentz vs. Dak, Reagor vs. CeeDee Lamb, Doug Pederson vs. Mike McCarthy. On paper, the Cowboys are better than the Eagles are right now, but this should be a close one — and not the blowout it was last season in Dallas. This very well could be for the division title.  [94WIP]

The Eagles get a pretty easy scheduling assist here. If this game matters for a playoff spot, Philly will likely be playing a bad team with little to play for.

We'll wrap things up with Bowen:

Washington bookends the schedule. It will be interesting to look back at Week 1 from the perspective of Week 17 and see what we were right and wrong about. I see the Eagles giving Dwayne Haskins a hard time.  [Inquirer.com]

The Eagles look like they'll have a winning record, and will be playing in the postseason: