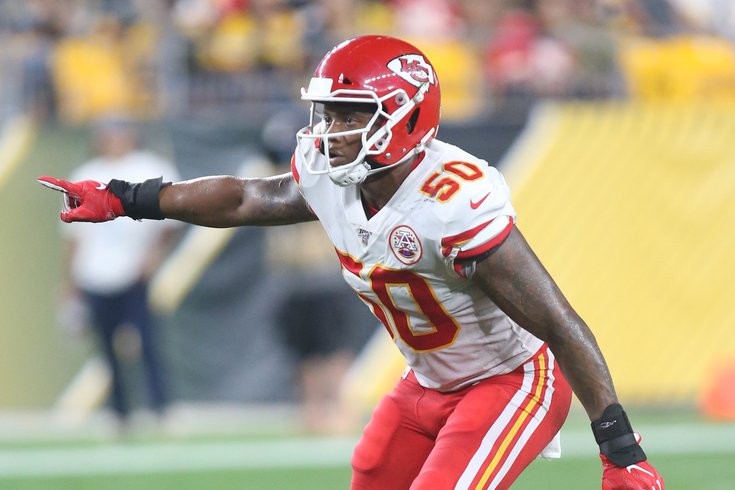 Inside linebacker Darron Lee won a Super Bowl with the Chiefs last season, but he's currently looking for a new home.

Coming out of free agency, the Eagles still have some holes to fill on their roster as they continue to prepare for a 2020 season that may or may not start on time.

The obvious No. 1 need is at wide receiver, a position they addressed early and often in the NFL Draft. Other top needs include defensive end and running back, and we've already taken a look at a few players at each position who could make sense as the offseason rolls on. Cornerback, as is seemingly always the case here in Philly, also remains a need, and we'll take a look at some options there before too long.

But today, we're going to look at a position at which the Eagles don't typically heavily invest: linebacker.

Heading into the draft, our own Jimmy Kempski ranked linebacker as the Eagles' third-most urgent need. And while they did go out and get Davion Taylor in the third round and local product Shaun Bradley in the sixth — and signed Jatavis Brown in free agency — their depth chart still seems to be lacking. Currently, it's T.J. Edwards in the middle with Nate Gerry and Duke Riley on the outside. Behind them are the three new additions mentioned above.

Needless to say, that's not going to inspire a ton of confidence. So, who are some linebackers the Eagles could still add via free agency? Let's take a look at some names...

This might be one of the names who makes the most sense for the Eagles. Lee, a speedy linebacker who is still just 25 years old and is fresh off his rookie contract. He struggled in Kansas City last season, making just two starts and playing just 14% of the Chiefs' defensive snap, after being traded from the Jets, where he was a regular starter on the defense.

But there's reason to believe the Eagles could be interested, as there were rumors linking him to the Birds as a possible trade candidate last offseason before he was dealt to the Chiefs. Our own Jimmy Kempski even wrote that the Eagles should go after him at the time. Here's his analysis of Lee, who he felt was a possible candidate to take the then-vacant starting middle linebacker job:

While not a traditional MIKE linebacker...Lee fits in the Eagles defense. He is known for his coverage ability, which is what Jim Schwartz values in linebackers. In fact, Lee was a CB in high school, and he ran a 4.47 at the Combine.

We all know that Schwartz loves versatile defenders and with Nigel Bradham out of the picture maybe the Birds make up for lost time by going out and getting Lee this time around.

A safety-turned-linebacker? Schwartz has to be licking his chops. The Alabama product started as a safety before he was traded to the Rams and converted to a linebacker, where he played well for a few years before signing a two-year deal with the Steelers. However, despite him finishing the season second among Pittsburgh linebackers in terms of snaps played, the team cut the versatile Barron earlier this offseason.

Here's more on what Barron can do from SB Nation's Behind The Steel Curtain blog:

Pittsburgh cut Barron loose in March when they decided his $5 million contract would be better spent signing impending free agents and the upcoming draft class. It didn’t move the needle much in either direction with the fan base. Many perceived Barron to be an average-at-best pass defender and, as an undersized linebacker, a liability against the run. But Barron had a sneaky-productive season in 2019, if not for the numbers he put up then for the things he allowed the Steelers to do defensively.

As far as the numbers go, Barron was solid. He registered 82 tackles, three sacks, three passes defended, an interception and a fumble recovery while playing nearly 70% of the team’s total defensive snaps. He was decent in man coverage against bigger tight ends and above average against running backs, helping the Steelers improve decidedly against each. His biggest contributions did not necessarily show up in box scores, however, as Barron’s ability to play multiple roles let the Steelers shore up existing weaknesses in coverage while adding speed and complexity to their sub packages. This article examines the myriad ways the Steelers employed Barron and looks at why finding someone who can replicate his versatility may be tricky.  [behindthesteelcurtain.com]

We've talked about the idea of position-less defense and we know that Schwartz likes moving his players around the field, so perhaps there's a fit here for Barron.

After being released by the Giants earlier this offseason, Ogletree, 28, is looking for a new home. The former team captain in New York was set to become one of the highest-paid inside linebackers in the league (at $10 million per year) but after somewhat of a down year in 2019 combined with struggles in pass coverage, the Giants decided it was time to move on. Luckily for them, none of the money for this season was guaranteed.

The fact that Ogletree saw his tackles and interceptions take a hit in 2019 might give a team like the Eagles, who value coverage ability in their linebackers, second thought, but he's young enough that there should still be some miles left in the tank, and if the Eagles can make the price work, then they could definitely do worse than prying a former team captain away from a rival, especially at a discount (and especially after it cost Dave Gettleman two draft picks to land him).

As a six-time Pro Bowler, Matthews is the most accomplished name on this list. But he hasn't made one since 2015 and might not be the best fit for the Eagles, as he's more of an edge rusher at this point than a traditional linebacker. Still, with pass rush (read: defensive end) still a need for the Eagles, perhaps the 33-year-old with a penchant for getting after opposing quarterbacks can bring something the Eagles need. But given his age and relative lack of fit, this one seems like a long shot for the Birds.

The Eagles know Bradham well, but that works both ways. After all, there was a reason they let him walk in free agency this offseason. Bradham, 30, was a solid player for the Birds over the last four seasons, starting in 58 of 64 possible games and playing at least 89% of the defensive snaps over his first three seasons. An ankle injury limited him to just 12 games (and 71% of snaps) last season, as he finished with his fewest tackles as an Eagle and failed to record a sack for the first time since 2013. Given that they just let him go — and Howie Roseman saying the team is looking to move past its Super Bowl squad — it would be surprising to see Bradham back in Philly next season. Then again, they did just welcome back Corey Clement and many seem to think Jason Peters and Vinny Curry could be next. Maybe they've decided to get the band back together after all.

While we're on the subject of former Eagles, let's not forget Najee Goode, who was good enough to spend five years with the Birds, but not quite good enough to ever break through and earn a regular role, starting just three regular season games (all during the Eagles Super Bowl season) and one playoff game (the NFC title game against the Vikings). Goode, 30, has been a career special teamer but played a career-high 28% of the defensive snaps in Jacksonville last season, so maybe the Eagles add him back in a slightly elevated role than the one he played during his last stint in Philly. At the very least, they know they'd be getting a quality special teams guy who can also fill in at linebacker when needed. Obviously they lack depth at the position, so maybe two smaller signings would serve them better than one larger signing.

How about one more former Eagle on the list? After spending the first six years of his career in Philadelphia, the former second-round pick spent the last two seasons playing in Seattle and was part of the team that knocked the Birds out of the playoffs last season — although he didn't play after suffering a torn ACL in Week 17. Like Goode and Bradham, Kendricks was also a part of the Eagles Super Bowl team. After a rough first season in Seattle in which he played just four games while serving a suspension after pleading guilty to insider trading charges, Kendricks bounced back to post a solid season in 2019 before getting injured. With Kendricks still rehabbing from surgery for the foreseeable future — and his sentencing for those insider trading charges still hanging over his head — if Kendricks does join a team, it might not be until closer to the start of the season, or later.