Have you ever walked down the street and seen someone wearing a jersey so hideous you can't help but turn your head? Ever receive a present from grandma you had to smile and pretend to like while thinking, "Why didn't you just buy me a normal one?" Then this list, a selection of the worst jerseys for each major team in Philadelphia sports, is for you.

The Philadelphia sports fan has been fortunate during my lifetime in that most of the uniforms worn by the local teams have at least been passable, if not good. As a city, there isn't a unifying color scheme a la Pittsburgh's black and yellow uniforms, but each has done well to find their niche and move merchandise. Hell, the Flyers have even made people act as if their mascot is a real entity and not a human being in a hairy suit, which is quite the accomplishment in branding.

Not every attempt to change things up has worked so well, so as part of our week honoring the worst parts of Philly sports history, let's take a gander at some of the worst attempts at sports fashion in Philly history. 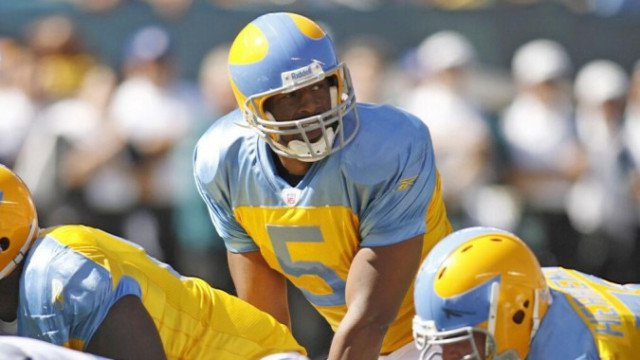 In any list of ugly Philadelphia sports jerseys, this one has to rank at the very top. The Eagles took the field wearing these bad boys in an absolute thumping of the 2007 Detroit Lions, the standout game of Kevin Curtis' run in Philadelphia. Fun fact: Curtis scored just eight times in 28 career appearances for Philadelphia, and three of those came while wearing these monstrosities. Sometimes the clothes make the man, I guess.

Results of the day aside, these are terrible in every single way. Powder blue and yellow are great jersey colors when paired with the right complementary colors (blue and white and black and yellow almost always work), but together they are a monstrosity. Nobody looks cool in these, and when I see someone at, around, or thinking about attending an Eagles game in one of these, I wonder if they made the choice themselves or are just trying to make someone who gifted them a jersey feel okay about the purchase.

I am not a believer in burning jerseys when athletes leave town, but I support taking every single one of these jerseys that are out in the wild and turning them into the Philadelphia version of the Springfield tire fire on The Simpsons. Nuke them from orbit if you have to, don't make me look at them ever again.

These jerseys stand alone with no real competition from other entries. While fans are partial to different color combinations of the jerseys, pants, and helmets, the base colors are strong enough that even their worst pairings are fine enough. Bring back kelly green though. 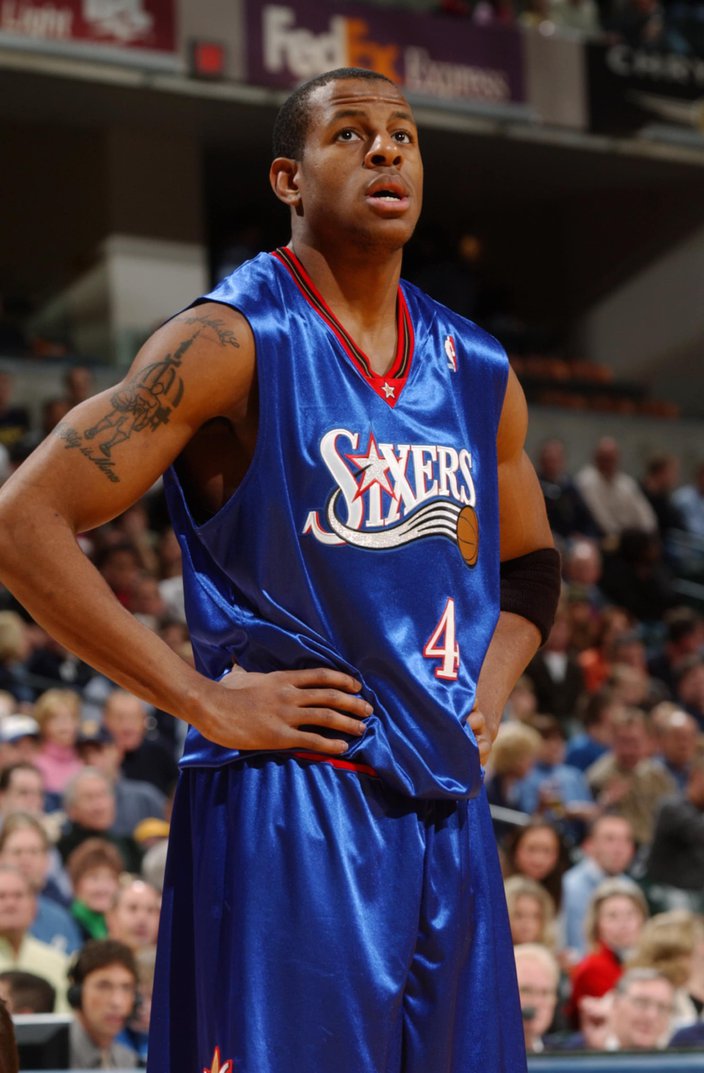 This will be a controversial choice, as there are some other jerseys in team history that are hated more. But this was the worst version of an otherwise overrated jersey that distinguishes itself from the pack.

The black jerseys from that time period are a nostalgic favorite for many who came of age during the Allen Iverson era, but those jerseys mostly only look cool because Allen Iverson is one of the coolest athletes of all-time. They could have worn garbage bags and he would have had people putting the No. 3 on the back of a Hefty. But the qualities of those uniforms — ultra baggy, the shiny material, the logo — were all tacky as hell and aged terribly.

At least the black edition has the benefit of, well, being a black jersey, which are hard to screw up on a base level. The blue jersey tried to mash the worst parts of their standard jersey from the time period with a color that looks terrible in that shiny satin. It's a jersey that would look more appropriate as the pillowcase on the houseboat of Tim Meadows' character from The Ladies Man.

The worst thing I can say about the jerseys from this time period is that they went away from a red, white, and blue color scheme that both looks good on jerseys and means something to city and theme of the team. Some people think their standard jerseys now are "boring," but you can give me standard red, white, and blue any day. 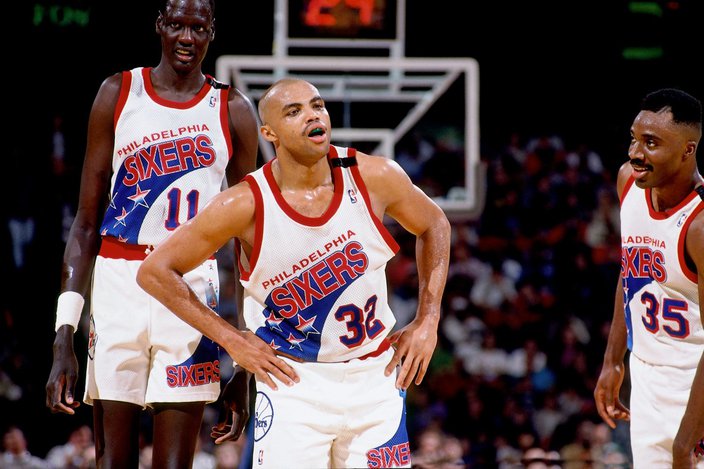 These have a strong case as the worst jerseys in team history and placing them in the honorable mention category does not diminish how bad they are. It does not help their case that the Sixers were horrific during the time period they wore these jerseys, trading away franchise player Charles Barkley and wandering around aimlessly until Mr. Iverson showed up.

Here's my thought here — these relics from a bad era of Sixers basketball are so tacky that they almost transcend being bad. They look like something you might see a 20-something white dude show up in to a music festival in 2025 (or whenever we can go in public again). Eventually, someone is going to pretend these are actually kind of cool.

There is no such chance for the shiny monstrosities up top. If you think the shooting star jerseys are the bottom of the barrel, I think you have a point, but they're running second place in my personal race. Get that silk robe look out of my damn face. 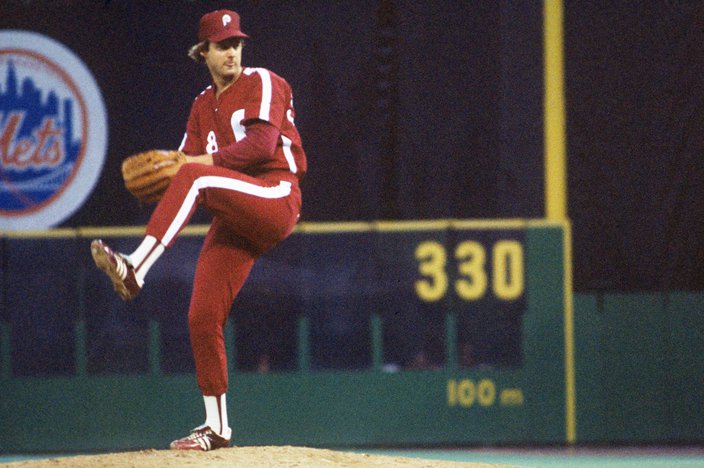 I'm going to go out on a limb here — I don't think these are as bad as they're made out to be. If you look up broader lists of the worst jerseys ever, these often rank near the very top, they're really not quite that bad. The logo is good, the maroon and white combo is a decent baseline, and the makings of a strong jersey are there.

Unfortunately, there is simply too much of that maroon for these to work. If the Phillies would have simply inverted the colors on the pants, these probably would have worked well enough, but they chose a monochromatic look that inspired nothing but groans from fans. Some younger fans enjoyed this look when the Phillies brought it back as a special occasion recently, but similar to the Iverson effect, I think Bryce Harper being handsome probably just made people think they look better than they actually do.

Please leave this look to members of the military. Yes, that includes you, man who goes out in the woods and shoots deer for fun. You're attending a sporting event, not participating in Operation Iraqi Freedom. 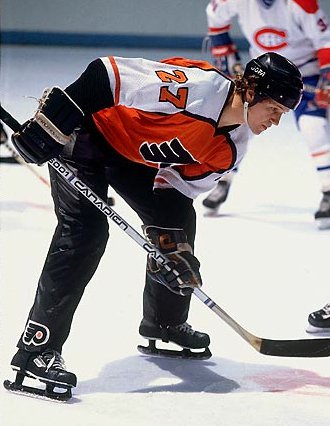 I'll admit, coming into this exercise, I didn't have any strong opinions one way or another about Flyers jerseys. They've had a consistent theme for decades, albeit with some slight experimenting within that theme, and they are neither standout uniforms or worth hating. Flyers jerseys are sort of representative of the franchise over the last few decades, almost always solid, almost never at the top of the pack.

After some cursory research, I stumbled upon this photo of the Flyers wearing long pants during a game and never quite realized how absurd they look without the contrasting colors from the knee down. This didn't change the color scheme or the tops, but it made the Flyers look like they were wearing warm-up pants for an actual game. It looks absolutely ridiculous.

Thankfully, the Flyers (along with some other hockey teams from that period) abandoned this look quite quickly, so the proof that this happened in the first place has faded from view.

These jerseys look like they were designed by a kid sitting in a computer lab who was just figuring out how to use WordArt on Windows 95. The instinct to make more things in 3D has gone poorly in many different mediums (forcing it into video games and movies has dated some recent properties beyond belief), and these jerseys are not an exception to the rule.

Opinions will vary on this one, but I would also give a shout to the recent anniversary jerseys with gold accents. You can use gold effectively when it's one of the primary colors, otherwise, it just looks like you're trying to add luster to an inherently dim product.

Hmm. On second thought, maybe the Flyers were onto something...