What they're saying: Eagles' biggest hole to fill, Pederson a Top 5 NFL coach and more 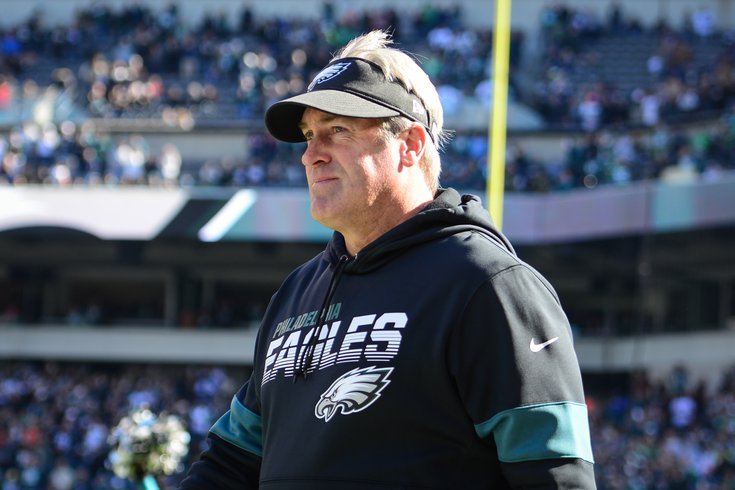 With no sports currently being played, the Philadelphia Eagles, fresh off the NFL Draft that took place just two weeks ago, are currently dominating headlines in Philly. But who are we kidding, the Eagles have been dominating the headlines in this city long before a pandemic shut down sports for what has been nearly two months at this point.

Late Tuesday night, another report dropped linking the Eagles to free agent defensive end Jadeveon Clowney, and we've already examined that. We've also already taken a look at the offensive side of the ball and where the Eagles are deep (and not so deep) following the draft.

But there's plenty of other things to talk about when it comes to the Birds, so let's take a look at another round of What They're Saying...

As mentioned above, we've already taken a look at the team's rumored interest in Clowney, and last week we broke down defensive ends who might make sense for the Eagles, as Jimmy Kempski listed linebacker as the Eagles' third biggest need coming out of free agency (behind wide receiver and cornerback).

Over at ESPN+, the staff from Football Outsiders took a look at each team's biggest need coming out of the draft, and after the Eagles addressed the wide receiver position (but not so much cornerback), they believe the Birds' biggest need is at linebacker. That very well may be the case, but it's not really a position the Eagles have prioritized.

Given that it remains a need, it appears the Eagles aren't all that interested in addressing it, although they did add linebacker Davion Taylor in the third round of the draft.

Quarterback Jalen Hurts opens the door for some creative offensive playcalling, but with Carson Wentz on the roster, the Eagles' selection of Hurts tends toward luxury. The team will likely feel the effects of that indulgence the most at linebacker in 2020. The Eagles addressed the position with their next pick in the third round, but in between, second-tier linebackers who could be immediate every-down players, Zack Baun and Logan Wilson, went off the board. The Eagles' subsequent pick, Davion Taylor, has the athleticism to become a three-down player in time, but he is inexperienced. He did not play football before he turned 18 and played just two years in the FBS at Colorado. Presumed starters Nathan Gerry and T.J. Edwards have just 19 starts between them, the lion's share by Gerry in 2019, when, according to Sports Info Solutions, he missed an alarming 29% of his attempted tackles, the highest rate among linebackers with 50 or more attempts. Should either Gerry or Edwards falter, Taylor likely will not be ready to fill in during his rookie season.  [espn.com]

One of the NFL's best coaches

Last season, Eagles head coach Doug Pederson was ranked by Rotoworld as the fourth best coach in the NFL. This year, after a somewhat disappointing 9-7 season for his team that was largely not his fault (he doesn't control injuries), Pederson has fallen. But not that far.

This time around, he checks in as the fifth best, behind Bill Belichick, Andy Reid, Sean Payton and Jim Harbaugh, respectively. That's not too shabby...

Doug Pederson quickly gained a reputation as the league’s analytics prince, but his recent seasons have been more MacGyver than mathematics. If you need to win a playoff game with your backup quarterback, Pederson is your man. A 4-0 finish to steal the division after starting 5-7? Pederson will get it done. Craving normalcy? Pederson hasn’t really had it since Carson Wentz’s 2017 ACL tear. That’s when things got weird and have stayed so. A huge part of it has been personnel. The Eagles routinely don’t have it in the secondary, while the injuries got so bad on offense last year that “Greg Ward” spent time as the No. 1 receiver. Pederson continues to make lemonade out of lemons, which can obscure his continued devotion to cold, hard logic. Even at 9-7, the Eagles remained one of the league’s most efficient offenses last season, as well as one of the most aggressive on fourth down. Pederson knows what he’s doing, and it will look even better if his team can get just a little bit healthier with a little bit better roster.  [rotoworld.com]

Over at NBC Sports Philadelphia, Rueben Frank checked in with NFL.com draft expert Lance Zierlein, who had some positive words for Eagles fans regarding two of their Day 3 picks: wide receivers John Hightower and Quez Watkins.

Both are very fast, and Zierlein believes both could make an impact on the Eagles offense.

Hightower, a 6-foot-2, 175-pound JUCO transfer played just 23 games for Boise State, but hauled in 82 passes for 1,447 yards and 14 touchdowns. Watkins, meanwhile, ran the third-fastest 40 of any wide receiver at this years combine and compiled nearly 1,200 yards last season.

“John Hightower is a big-time traits player,” Zierlein said. “He’s got height, weight, speed, he had a very good workout when he worked out, he’s a player that I can see from a trait standpoint outplaying his fifth-round selection. And I know John Hightower was a player some scouts were high on as a Day 3 sleeper in this draft. So I think John Hightower in the fifth is one of those really sneaky value selections where you could end up plugging him in as a wide reciever 6 and keep him around, keep him alive on your roster, until he continues to find his way as a route runner and learn the NFL game.”

“Quez Watkins, blazing speed,” Zierlein said. “I didn’t love his tape, but there were some teams that had a fourth-round grade on him when I was going through the process of figuring out my draft slotting. I know at least two teams that had fourth-round grades on him and that was based primarily on their projections of him as a player as opposed to just what they saw on tape.”  [nbcsports.com]

Then there's undrafted free agent defensive Matt Leo. The 28-year-old Australian, who played collegiately at Iowa State, isn't anywhere close to playing an NFL snap for the Eagles. But his story is a good one.

But he’s considerably closer [to playing in the NFL] than he was in February 2013, when Leo sat down for lunch at the trade school in Australia where he was learning to be a plumber.

The Ravens and the 49ers were playing in Super Bowl XLVII on the lunchroom TV, and Leo remembers thinking, “If only I had grown up in the U.S., I would have had the opportunity to play such a, you know, a ‘movie icon’ sport. You watch it and you see these incredible athletes play and it’s almost like a movie scene.”

Seven years later, including two spent playing defensive end at Iowa State, Leo is an Eagle, signed with an extra roster spot the team got for taking on a player from the NFL’s International Player Pathway Program.

The spark that lit the path from Adelaide, Australia, to signing with the Eagles might have been ignited in the trade school lunchroom, but at the time, Leo just saw the NFL as something to daydream about. He continued to learn to plumb.  [inquirer.com]

And finally, we missed this one last week but figured it's an everGREEN story. See what I did there?

Over at The Athletic, they ranked all 32 uniforms in the NFL, and the Eagles didn't fare so well, finishing 22nd overall and third in the NFC East, ahead of the Giants (25th) but behind Washington (21st) and the Cowboys (6th). While many in Philly are probably thinking, "Well, if they kept the Kelly green they'd be a lot higher."

Not so fast, according to Barrows and Brown.

22. Eagles. In 1996, the Eagles moved from happy Kelly green to a deeper, what-are-you-looking-at-pal green that better suits this fine city. That they won a Super Bowl in those duds likely means they’ll never go back. You got a problem with that?

For the record, we disagree that the current uniforms are better.