Where are the Eagles deep, and not so deep, after the 2020 NFL Draft: Offense edition 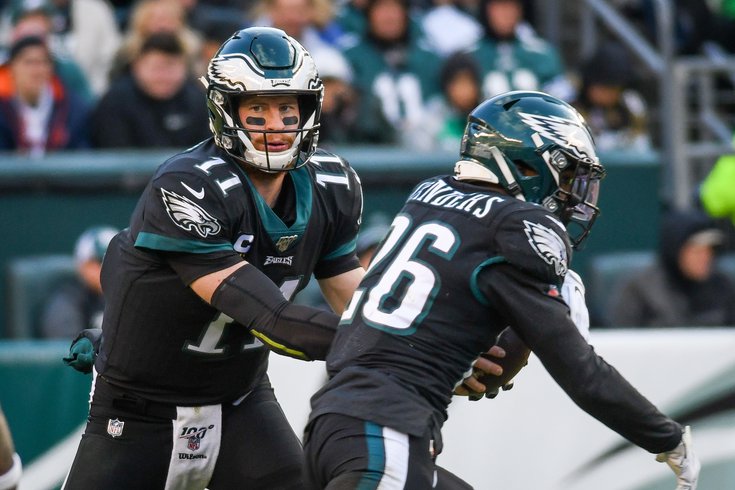 While the Philadelphia Eagles could still add a veteran here or there to their roster before the start of the season, it is still probably somewhere around 90-to-95 percent set. Here we'll take a look at each of their positions, and determine where they are strong, and where they still need help, starting with the offense.

Quarterback: Even with a hefty draft resource thrown at it, are the Eagles that much deeper?

Each year, Mike Sando of The Athletic is able to get commentary from team executives around the NFL, who speak freely about other teams' drafts. Within the Eagles' section, I think one comment in particular is fair to ask.

“If Carson goes down, are you really going to win a lot of games with Jalen?” an exec said. “Would he win you more games than just a regular veteran backup would? I don’t know.”

That's a fair question. Just because the Eagles spent a second-round pick on a quarterback doesn't exactly mean that they are instantaneously deep there, especially since, as we've mentioned repeatedly here already, a severely altered offseason program is going to inhibit Hurts' ability to learn a pro playbook and get adequate practice reps.

By my count, only three No. 2 quarterbacks (using Ourlads.com's depth charts) have been with their team longer than Sudfeld has been with the Eagles. They are Matt Schaub (Falcons), Nick Mullens (49ers), and Jacoby Brissett (Colts). Sudfield knows the offense inside and out by now, whereas a rookie will be way behind.

Are the Eagles in good shape here relative to the rest of the league? Yes, I suppose you could make an argument for Hurts' upside and Sudfeld's tenure with the team both being positives, but specifically in 2020, there are plenty of other teams around the league with good veteran backups who are probably better equipped to continue to win games if their starter goes down.

Obviously, we'll get a better sense of how ready Hurts is during the preseason.

Running back: Probably still some work to do

The Eagles had eight running backs on their 2019 training camp roster, so they are likely to add at least one more veteran. To be determined if that will be a player worth having on the regular season roster, or just a body.

As is, it's a group that is led by Sanders, who had a legitimate argument for Offensive Rookie of the Year honors in 2019. That award went to the Cardinals' Kyler Murray, because he plays quarterback, and because he was the No. 1 overall pick, when guys like Sanders, Oakland's Josh Jacobs, and Tennessee's A.J. Brown (take your pick) all had better seasons. But whatever.

Anyway, Sanders' future is bright. He's talented, he works hard, and he's a good kid. He also put to bed any concerns about his ability in pass protection and as a receiver. Beyond Sanders, Scott turned in one of the most pleasantly surprising seasons on the team a year ago, and the Eagles hope he can build on that.

Clement was great as a UDFA in 2017, but injuries have stalled his career, and the fourth spot would currently occupied by a one of a handful of lottery tickets in Holyfield, Warren, and Killins.

Ideally, the Eagles could find a reliable No. 3 RB on the open market, and there are plenty of options.

Are the Eagles in good shape here relative to the rest of the league? Sanders has the chance to be special, but I would say that most teams around the league have better running back depth.

The "No. 1 receiver" right now is Jackson. Like, even if we're wrong about Jeffery, and he returns to the team this season, he likely won't be ready for Week 1, and even if he is, is he even good anymore? He certainly wasn't in 2019. So we can all agree on the premise that Jackson is the No. 1 receiver, right?

If so, that's not great. As is, the Eagles are in a position in which they will have to count on some combination of the following:

Those don't exactly feel like great bets. None of them are sure things, or even close. The feeling here remains that the team should have done something in free agency to help fix the position.

Are the Eagles in good shape here relative to the rest of the league? No.

Ertz and Goedert form the best 1-2 TE combo in the NFL, though there isn't much behind them.

For a team that plans on running a 2-TE set as their base offense, it's at least somewhat surprising the team didn't do more to add a third tight end that is better than Perkins.

Togiai is a nice receiver, but he has a long way to go as a blocker. It's worth noting that Justin Peelle has done a nice job developing his tight ends.

Are the Eagles in good shape here relative to the rest of the league? Obviously, yes.

For years, the Eagles have had an offensive line that the vast majority of the league would be envious of. The right side of the line is particularly great, with the best RT in the NFL in Johnson, and arguably a top 3 RG in Brooks. At center, Kelce has been named first team All-Pro in each of the last three seasons.

On the left side, after a dreadful game against the Falcons Week 2, Seumalo turned in a good season, and his arrow seems to be pointing up.

At LT, we won't rehash the whole "Should the Eagles bring Peters back" debate here. We did that in depth last week. But whether it's the 38-year old Peters, or the highly questionable Dillard, the Eagles should have concerns.

But overall, in a league where most teams can't even start a competent full starting five, the Eagles are in good shape, both in terms of talent, and continuity.

There are depth concerns, especially with the loss of Halapoulivaati Vaitai this offseason, but the Eagles have also put some new bodies into the OL pipeline, in Driscoll (4th-round pick), Wanogho (6th-round pick), and Juriga, who the Eagles had a draftable grade on.

And then there's Pryor and Mailata, who will both have yet another offseason to refine their games.

Are the Eagles in good shape here relative to the rest of the league? Even with the LT drama, definitively yes.