Where are the Eagles deep, and not so deep, after the 2020 NFL Draft: Defense edition 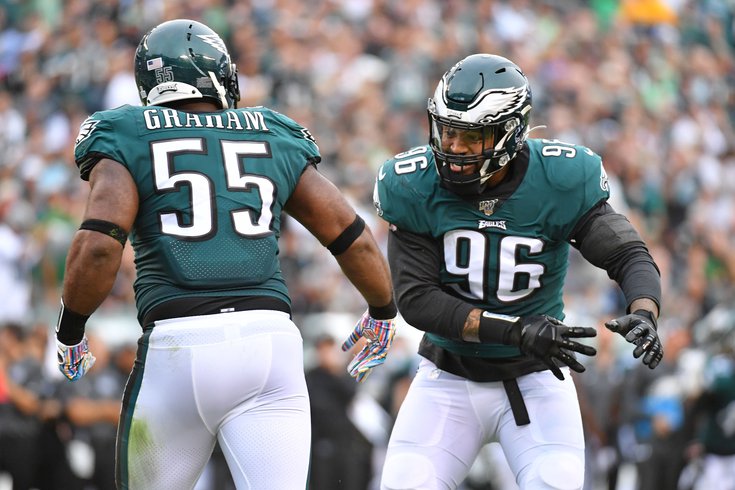 While the Philadelphia Eagles could still add a veteran here or there to their roster before the start of the season, it is still probably somewhere around 90-to-95 percent set. Here we'll take a look at each of their positions, and determine where they are strong, and where they still need help.

On Wednesday we started with the offense. Today we'll look at the defense.

The Eagles have three defensive ends who will be expected to produce in Graham, Barnett, and Sweat. Thereafter, it's sort of a mishmash of guys with unclear roles:

• Avery's best usage, in our view, would be as a hybrid linebacker / pass rusher. I don't think he can play DE at his size on normal down-distances, because he'll be a major liability against the run. And then even in obvious pass rush situations, I don't think you can line him up on the edge and expect him to get a high percentage of one-on-one wins, because his size will always limit his pass rush repertoire. His explosiveness is pretty clear, but it'll be a challenge to find ways to get him into games in that rush Joker role, without telegraphing to the offense what's coming, unless he can develop as a linebacker who can also cover and play the run.

• Ostman is similar to Avery in some ways, in that he's undersized, and the Eagles tried to use him in a Joker role before he tore his ACL during 2019 training camp. I do believe that Ostman has a better chance of becoming a traditional DE than Avery does, because of Ostman's strength, but it'll be hard to fit two specialty players like them on the roster. I think it's one or the other, and Avery has the unfair advantage of costing a fourth round pick to acquire.

• Hall has been productive when he has gotten opportunities, but he tore an ACL on a meaningless play at the end of the Eagles' NFC East clinching win over the Giants.

• Miller didn't play a single snap last season, despite a banged up defensive line. That's not a great sign.

• Toohill is a hyper athletic seventh round pick, but again, an undersized one like Avery and Ostman. He'll probably need a year to get bigger, and is a good practice squad candidate.

Are the Eagles in good shape here relative to the rest of the league? Graham is who he is, which is a good starting defensive end who isn't going to get big-time sack numbers, but will be consistently disruptive against the pass, and outstanding against the run. Some will appreciate that, some won't.

As for whether the Eagles have better ends than most, Barnett is the real key here. He has shown glimpses of a player ready to break out, however, durability has been an issue, and as an extension of that, so has productivity. He's still only 23 years old, younger than some guys who were selected in the 2020 NFL Draft, and he has made his share of huge plays in big moments. If he can take a big step forward in 2020, which I don't think is unrealistic, then the Eagles will have a really good defensive line that can carry a defense.

As is, I would say that no, the Eagles' defensive ends should not be viewed as better than the average 4-3 team. Should Barnett stay healthy and become something closer to a 10-sack kind of guy, then yes, they are.

Cox had a down year in 2019, which was at least partly caused by recovery from foot surgery performed during the 2019 offseason. Now fully healthy, the expectation will be that he will get back to being the elite DT that he was in 2018, when he had 10.5 sacks and 34 QB hits. We'll see.

Cox, Hargrave, and Jackson are the second-, seventh-, and tenth-highest paid 4-3 defensive tackles in the NFL, per OverTheCap.

Are the Eagles in good shape here relative to the rest of the league? They better be! But yes, the Eagles have invested heavily in the interior of their defensive line, and have a chance to be special there, assuming they don't suffer another major injury.

Throughout April, anyone who watches the team closely sort of knew that it was highly unlikely that the Eagles would address the linebacker position in the first round, given the team's draft history. Non-locally, linebackers like Kenneth Murray and Patrick Queen were commonly given to the Eagles in mock drafts, and it's easy to see why. Draft analysts simply looked at the Eagles' LB depth chart, and probably went, "Ew."

In my view, it probably looks worse on paper than it actually is. While Gerry isn't an ideal three-down linebacker, he did make significant improvements in 2019.

Edwards was a tackling machine against the run in his limited action in 2019, but he mostly only played on traditional run downs, and was largely untested in the passing game. At a minimum, he can play in a Joe Walker / Dannell Ellerbe type of role as a third linebacker on run downs, and be way better than either Walker or Ellerbe. That's his floor. To be determined if the Eagles will allow him to play more on passing downs in 2020, and how he will respond if given that opportunity.

Are the Eagles in good shape here relative to the rest of the league? Obviously, no.

The Eagles' corner situation should be greatly improved in 2020 with the addition of Slay, who is a legit No. 1 NFL corner. If he goes down... 😬

Opposite Slay on the outside will likely be the 5'9 Maddox, who is better suited for slot duty, but appears to be playing outside corner, for now, out of necessity.

The Eagles are in good shape in the slot, with Robey-Coleman and LeBlanc, and while Jones has been a disappointment three years into his NFL career, he should at least be a good backup, either inside or outside.

Are the Eagles in good shape here relative to the rest of the league? We've been fooled by the corner position looking good on paper in the past, but, oh hell, I'll trick myself again... I think they might actually be good here, overall, at least if Slay can stay healthy for 16 games?

The starting safeties will be Mills and McLeod, pending further movement of Mills. While the corner spot got better with the additional of Slay, the safety position objectively got worse with the team no longer feeling the need to employ Malcolm Jenkins. We'll see how that goes.

On the bright side, the selection of Wallace in the fourth round is potentially great value, and Schwartz has a history of letting defensive backs play important roles as rookies. The feeling here is that he'll have an early, notable role.

Are the Eagles in good shape here relative to the rest of the league? For the first time in a while, no.