Analyzing the advantages and disadvantages of the Eagles' 2020 schedule 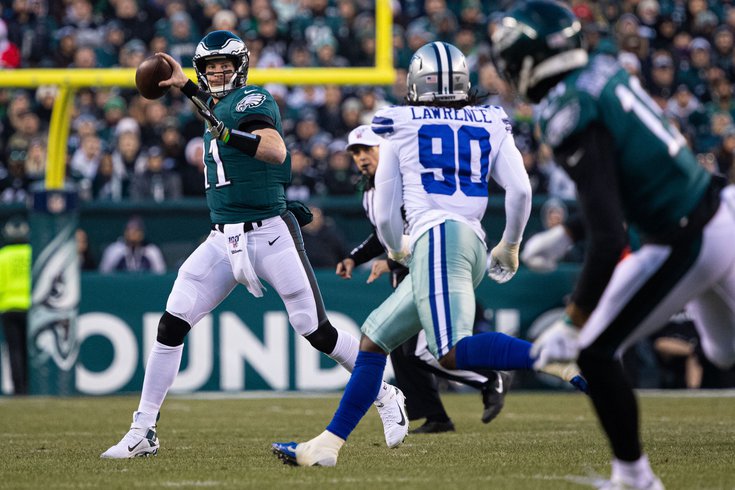 The Eagles will have a mini-bye before they face the Cowboys Week 8.

The Philadelphia Eagles' 2020 schedule is set (well, maybe), so now we'll take a deeper look at the advantages and disadvantages of this year's slate of games. For quick reference, here's a snapshot of the Eagles' schedule, via the Eagles' Twitter account:

• Overall, it's really not a tough schedule from an opponents' winning percentage perspective. Yes, the out of division games look difficult, but getting four games per year during this current run of Giants and Washington ineptitude is a huge advantage over the rest of the NFC, where divisional play is more competitive.

Of course, because the Eagles play a first-place schedule, they'll have, in theory, a more difficult schedule than the other teams in the NFC East, but we'll get to that in the disadvantages sections.

• Week 9 is a nice spot for the Eagles' bye. It's also symmetrical, in that it'll cut the Eagles' regular season in half. That should be pleasing for any of you who have OCD issues, like me.

• Opening up against Washington is ideal. The Eagles have beaten the Washington team six straight times, with an average margin of victory of 12.8 points during that span.

Additionally, Washington has a new coaching staff, and it should be difficult for them to get where they need to be by Week 1, with what is going to be a drastically shortened offseason. There's perhaps an argument to be made that a new head coach will be difficult to prepare for, but Doug Pederson has prepared for Ron Rivera-led teams in 2017 and 2018. There shouldn't be any major surprises.

• My logic is that you would prefer to get your weaker opponents early in the season. Or perhaps better stated, you would prefer to get your stronger opponents later in the season. Why? Well, because the NFL is a league that depends so much on injury luck, early-season good teams becoming late-season bad teams is a more common occurrence than early-season bad teams becoming late-season good teams. And so, you may as well get the bad teams early and the good teams late, since the good teams might lose a quarterback or something. Does that make sense? Good? Good.

As noted above, the Eagles open with the Washington team. In Week 3, they'll face the only team in 2019 that had a worse record than Washington, the Bengals.

• Hey look! The Eagles' Thursday game is at home for a change. It's Week 7, against the Giants, who will only have to make a short trip down the NJ Turnpike to Philly, but the Eagles will still view that as a welcomed change.

• And then after that Thursday game, the Eagles will get a mini-bye before facing the Cowboys at home Week 8. It's worth noting that the Cowboys have a road game in Washington Week 7. That's a nice advantage.

• In Week 14, the Eagles will be the Saints' third straight road opponent. Playing three straight road games in the NFL is not easy.

• Oh, their opponent in Week 17 is... drumroll... Washington! So they open with Washington, which is ideal for the reasons noted above, and they'll close with them as well, which is also ideal since a bad team like that may be in quit mode by Week 17, and the franchise may not mind losing so much to help draft positioning.

• As noted above, the Eagles have the advantage of playing in the craptastic NFC East, which is really the No. 1 reason they made the playoffs in 2019.

As the NFC East champs a year ago, the Eagles have to face the NFC South and NFC North champs. Those two teams are the Saints and Packers, who both went 13-3 in 2019. Here's who the NFC East teams have to face in those two floating games:

The Vikings are probably pretty close to the Packers, but there's no doubt that the Saints are better than the Falcons.

• The Eagles have two tough stretches. The first comes early in the season:

The Niners and Ravens combined for a 27-5 record in 2019, and the Steelers' roster was good enough to somehow win 8 games with two horrendous backup quarterbacks who filled in for Ben Roethlisberger for almost the entirety of the season.

• This is perhaps the most favorable schedule structure that I've seen the Eagles get in my time covering them, and of course, it comes in the year that the season might get wiped out or altered by a global pandemic.