A look at the Eagles' players over 30, and their succession plan for each 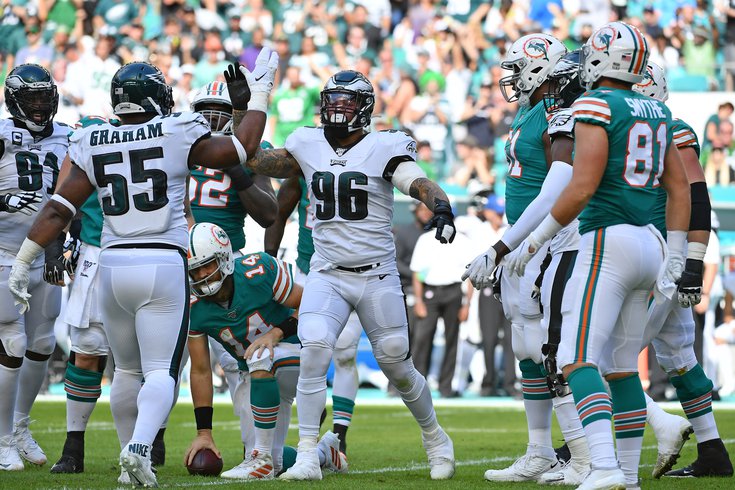 The Eagles really need Derek Barnett to prove that he can be a long-term answer at DE.

That's not a terribly high number relative to the rest of the league, however, they also have an additional five players who will turn 30 by the time the Eagles will participate in a playoff game, should they make it to one in 2020. They are Fletcher Cox, Zach Ertz, Darius Slay, Rodney McLeod, and Marquise Goodwin.

Having 12 players at 30 years of age or older would be a high number. To be determined if they'll bring back guys like Jason Peters, Vinny Curry, LeSean McCoy, etc., which would raise that total even higher.

Of those 12 30-somethings, nine are projected starters, and we're not even including Alshon Jeffery or Malik Jackson among them. Only two of the 12 -- McLeod and Goodwin -- have never made a Pro Bowl or been named to an All-Pro team.

Of course, that's not completely out of the ordinary. The oldest players on teams are often also the best players, seeing as they've been able to stick in the league long enough to become among the oldest. In the Eagles' case, however, the balance of talent is clearly shifted heavily toward the older players.

• WR DeSean Jackson (33): The Eagles added three young burners in the draft in Jalen Reagor, John Hightower, and Quez Watkins. Adding more speed to the offense was clearly the No. 1 priority for them in the 2020 NFL Draft.

• C Jason Kelce (32): Kelce is nearly irreplaceable. By that I mean, the Eagles aren't super likely to find a player who possesses Kelce's blend of skill and leadership. Whenever he retires, it is almost certain to be a downgrade to the next guy up. If Kelce retired tomorrow (he won't), Isaac Seumalo would likely slide in at center, and he might be OK there, however, Seumalo has become a quality starting LG, so the Eagles might be best served to just leave him there.

On the current roster, the Eagles have some lottery tickets as potential Kelce successors:

If none of those guys give the Eagles a legitimate reason to make the Eagles believe they take over for Kelce, which is the likeliest scenario, then we'll be talking about interior OL being one of the Eagles' biggest needs in the 2021 NFL Draft.

• DE Brandon Graham (32): In Graham's first five years in the league, his snap counts were fairly low. Over the last five years, he has put more mileage on the odometer. The Eagles can probably only expect two more starting seasons out of Graham, and because pass rushers tend to take a while to develop into good starters, the sooner the better on filling that pipeline with more talent.

The Eagles badly need for Derek Barnett to show that they can rely on him to be a long-term answer opposite Graham, or they're going to be in a situation in which they're overpaying for pass rush talent in free agency.

• RT Lane Johnson (30): Johnson remains a freak athlete, and should be a player who can remain a quality starter into his mid-30's, should he continue to want to play football, which feels likely.

• RG Brandon Brooks (30): Brooks is in his prime, but two straight offseasons recovering from surgery has to suck, from a mentality standpoint. Amazingly, Brooks got himself ready to play Week 1 in 2019, fewer than nine months from rupturing his Achilles. He should be ready to play in time for whenever Week 1 happens after undergoing shoulder surgery in January.

• DT Malik Jackson (30): Jackson's succession plan is already in place in the form of Javon Hargrave.

• WR Alshon Jeffery (30): We won't re-litigate Jeffery's status on the 2020 team (I'll reiterate that I'll be stunned if he ever plays another snap for the Eagles again), but the Eagles hope Jeffery's successor is already in place, in the form of J.J. Arcega-Whiteside, who possessed many of the same traits as Jeffery at Stanford, but had a very disappointing rookie season.

• DT Fletcher Cox (turns 30 in December): The bet here is that Cox returns to form after he was hindered by an injury during a down 2019 season. If he doesn't, which isn't out of the question, adding young talent to the defnsive tackle position should become a priority.

• TE Zach Ertz (turns 30 in November): We've previously covered the "trade / extend / do nothing" topic on Ertz. Spoiler: The Eagles should do nothing, for now. But certainly, the Eagles' No. 2 tight end, Dallas Goedert, is already an NFL starter, with the potential to become a really good player.

• CB Darius Slay (turns 30 on January 1, 2021): After the Eagles traded for Slay, the two sides worked out a reported three year, $50.05 million contract extension. In reality, it's more like a two-year deal worth $26.5 million. With 5'9 Avonte Maddox on the outside opposite Slay, yes, the Eagles need to continue to look for outside corners.

Also, after having watched Slay extensively over the last week (his review is coming soon), he is never going to be a corner who transitions to safety, as that would require him to tackle.

• S Rodney McLeod (turns 30 in June): The Eagles drafted K'Von Wallace in the fourth round (widely regarded as a high value pick), but Wallace is probably better suited to the Malcolm Jenkins "do-everything" role, which is currently occupied by Jalen Mills. The Eagles use another safety for McLeod's deep middle role.

• WR Marquise Goodwin (turns 30 in November): Goodwin was a lottery ticket addition during the draft.

Assuming the absence of some kind of drastic negative development in the career of Carson Wentz, the Eagles won't be "rebuilders" anytime soon. Still, a lot of their best players are likely to see their careers wind down, or at least decline in some way, in the near future. "Reloading," particularly in the trenches (on both sides of the ball), is going to be a difficult long-term challenge for the front office.