Doug Pederson says Eagles offense will look 'different' this year — but what does that mean? 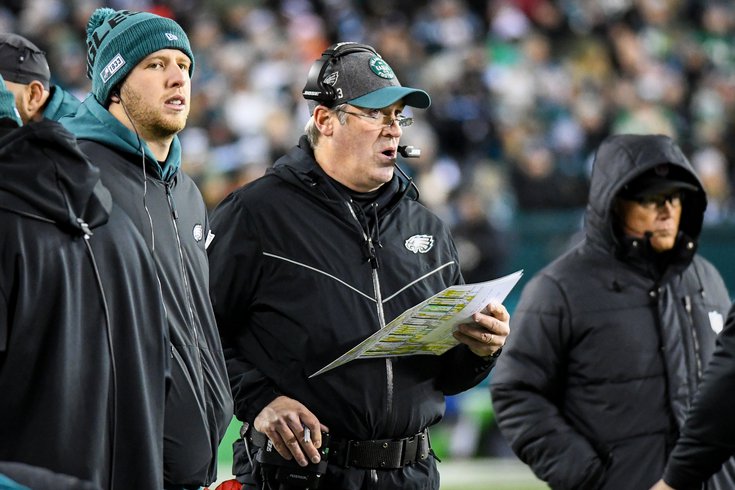 Doug Pederson calls a play during the Philadelphia Eagles wild-card loss to the Seattle Seahawks.

It's no surprise to anyone who's watched the Eagles play regularly over the last two seasons that they've been unable to replicate their high-powered offense from their Super Bowl season in 2017. Some of that has been due to injuries — the quarterback, the wide receivers, the running backs and the offensive linemen have all been impacted there — but some of it has had to do with the personnel they've had to work with, both on and off the field.

It's part of the reason the Eagles parted ways with offensive coordinator Mike Groh and wide receivers coach Carson Walch earlier this offseason. It's why they've spent several draft picks on speedy wideouts, and added another in a draft-day trade. And it's why they not only made several coaching changes, but also changed the structure of the offensive staff.

In place of a traditional OC, the Eagles will go with a run game coordinator (Jeff Stoutland) and a pass game coordinator (Press Taylor), with Doug Pederson continuing to call the team's plays on offense. But the biggest move the Birds made this offseason — at least when it comes to the coaching staff — was the addition of senior offensive assistant Rich Scangarello, who was with the 49ers for two seasons before becoming the Broncos offensive coordinator last season.

Even though he wasn't with San Francisco last year, many of his concepts remained as the 49ers made it all the way to the Super Bowl. And now, he could be bringing those schemes to Philly, which could result in a bit of new-look offense for the Eagles. Here's more from Paul Domowitch of The Daily News.

After finishing third in the league in scoring in 2017, the Eagles slipped to 18th in 2018 and 12th last year. They dropped from seventh in total offense in ’17 to 14th the last two years.

Pederson has made it clear that he not only wants to get faster, he also wants to find new ways to maximize that speed. Enter former Shanahan aide Scangarello.

“I think what we’ve done as a staff in the offseason with our scheme evaluation, making things better, the staff hires that I’ve done to bring in new thoughts and new ideas and ways to enhance our offense, I think (the offense) is going to look a little bit different," Pederson said recently.

Scangarello was brought in to “Shanahan-ize" the Eagles offense; help Pederson incorporate some of the concepts from Kyle’s offense that helped the Niners finish second in scoring, fourth in total yards, second in rushing and fifth in third-down efficiency last season on the way to the Super Bowl.  [inquirer.com]

The Eagles offense was already primed to look different this year, with the main distinction being more speed. Not only should they have a healthy DeSean Jackson back, but they also added Jalen Reagor, John Hightower and Quez Watkins in the draft, three of the fastest receivers in the class, and Marquise Goodwin, another burner, via trade.

And those picks may not only have been made out of necessity, but also as a way to help fit the roster around the scheme this coaching staff hopes to implement in 2020.

While Pederson still remains in charge of the offense, the Eagles do employ a collaborative approach when it comes to game planning, both on the micro and macro levels. After all, it was then-QB coach Press Taylor who brought the Philly Special to the playbook. And that cooperative effort is something the head coach made clear right from the moment the team announced their new hires. He even went as far as to say a lack of collaboration was a part of the problem last season, and presumably one of the things that led to the changes in his staff (in addition to the on-the-field struggles).

"I mean, again, our approach has been very collaborative," Pederson said back in February. "Our approach has been very direct from the standpoint of, you hire position coaches for a reason, not just to coach the position but to also have input on game plans. Having Rich [Scangarello] now being around Kyle [Shanahan] and his offenses, whether it be in Atlanta or San Francisco, being around quarterbacks like Matt Ryan and obviously [Jimmy] Garoppolo and Nick Mullens in San Fran, and then having coordinator experience in Denver last year, just for me it's very intriguing to bring in a guy who is going to help Carson No. 1, going to help our offense, he's going to be a guy — not solely his responsibility but — allowing us to take our offense to a different level.

"And it's something that we weren't as good at last year as in the past couple of seasons. And those are all things that I have to take a look at through the evaluation process. So I'm excited to work with Rich and Aaron [Moorehead] and the guys as we get ready for OTAs."

But it's appearing more and more like Scangarello, the offensive coordinator in everything but title, will be one of the loudest voices in Pederson's ear this season. To hear Pederson describe his responsibilities, it seems as though Scangarello will have his fingerprints on all over the Eagles' offense.

"It's various roles," Pederson previously said of Scangarello's responsibilities. "One, he's going to be able to bridge the gap and bring together the run division and the passing division and bring that together with a blend of formations and plays and things that really kind of tie everything together. And so that's going to be a key component. Obviously game planning, he's going to have his hands all over the game plan as well. A lot of communication, a lot of film study. He'll work with quarterbacks, just like I'm in that room. He'll have a chance to do that as well and have some input there as well. And just assist with us on offense."

With Scangarello having such a big impression on the offense, what could he bring that makes the offense "look a little bit different" this season, as Pederson suggests?

For starters, he wasn't shy about using trick plays during his brief stint as the offensive coordinator in Denver.

Of course, not all were as successful. But that didn't stop him, even after a failed attempt in his first game in charge of the offense. And some of those failures — like the three times he tried to use tight end Noah Fant as a running back on a crucial downs and came away with -12 yards in total — were likely part of the reason he only lasted on season with the Broncos, although losing two quarterbacks to injury probably had something to do with it as well.

But Scangarello's penchant for dialing up gadget plays is especially intriguing for the Eagles, who went out and selected Jalen Hurts, a mobile quarterback, in the second round of the draft. Between that and all the speed they added on the outside, it's hard not to speculate about what the Birds' new offensive mind has in store this season.

It sounded like a loaded question when Carson Wentz was asked about sharing the field with Hurts last week, but given that the Eagles also brought back Marty Morhinweg, another offensive mind who is no stranger to using gadget plays and tried to make two-quarterback sets a thing with Joe Flacco and Lamar Jackson in Baltimore, maybe there's something to the idea of both Wentz and Hurts being on the field at the same time.

At the very least, it's something Wentz has already considered. And is on board with.

"First things first, I'll say, 'We'll see.' We'll see how that all plays out," Wentz said on a conference call with reporters last week. "We haven't gotten too deep into the playbook and how things are going to look, but for me, whatever's going to help us win games. I came to Philly ever since being drafted and all I've wanted to do was win, you know, and stand up there and hold that Lombardi Trophy. Whatever that takes and whatever that looks like, I'm on board.

"Like you said, I'm a competitor, I want to be out there, I want to have the ball in my hand — we all do — but at the same time, whatever's going to help us win. I'm confident that the coaches and everyone are going to put us in the best situation. And, yeah, at the same time I would never dive into too many details of the trade secrets that maybe Coach is working on as we speak."

What exactly the Eagles have in store remains a mystery, but it will certainly be interesting to see how this all plays out.

RELATED: Did the Eagles draft Jalen Hurts to be Carson Wentz' backup, or do they have bigger plans for him?